R&B singer Ashanti’s sister, Kenashia, posted some disturbing photos of herself on Instagram in honor of Domestic Violence Awareness month. 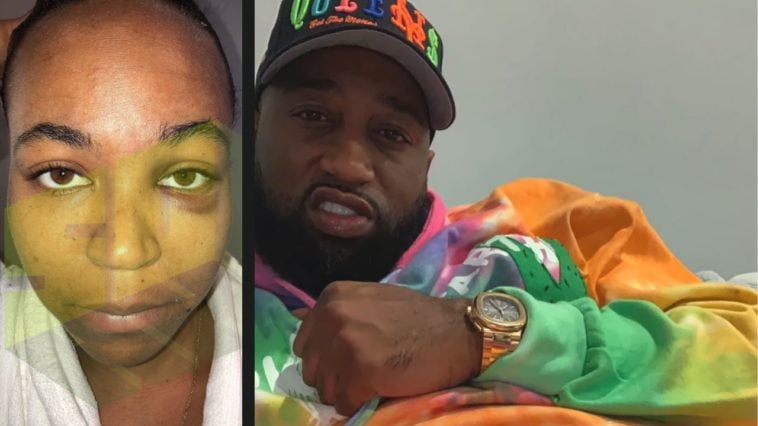 The post includes a slide of Kenashia with bruises on her body, broken teeth, a bloody mouth, and a video of a cringy altercation between her and former partner and abuser, hip-hop entertainer Slowbucks.

She recalls the toxic relationship experience in the same post, saying:

“I’ve been Punched, spat on, strangled, pushed to the ground. And been threatened with a (gun emoji) 🔫”

In addition, she addressed the issue of normalizing violence, healing your inner child from traumatic experiences, and more.

Kenashia then encouraged women and men to leave violent and toxic relationships:

“I look at these pictures, and I hold grace and patience for the woman I was and everything she didn’t know! I love her and thank her for her role in my journey. I don’t consider myself a victim or a survivor, this is all a part of my story, my life, and my journey…”

Her comments were then flooded with support from celebrities such as B Simone, Angela Yee, Ashanti, and more.

The images were first shared in April 2020 by Ashanti and Keynashia. As they do now, they sparked a lot of outrage and well-wish from everyone.

Rapper and media mogul 50 Cent also weighed in on the matter: he was big mad. The hip-hop veteran went off at Slowbucks, wondering out loud why he assaulted Shia.

“👀yo what’s wrong wit you boy, hitting that girl like that.🤔#abcforlife #bransoncognac#lecheminduroi Theking🍾”

Both Kenashia and Ashanti shared shocking footage of her domestic violence injuries. The duo relied on social media to expose the abuse she suffered.

Ashanti‘s baby sister, Kenashia Douglas, otherwise referred to as Shia, celebrated her 31st birthday quarantine style with her mother, big sister and a few loved ones. And while the occasion was joyful and full of smiles, Shia also ended her big day by informing people of the journey she’d been on to make it to 31. She narrated a pretty profound video she shared on Instagram, promoting a new page called Wife of Creation, where images and videos from throughout her childhood and adulthood were showcased. Shockingly, midway through the clip, images of the beauty show her with not only a black eye but also a bloody face with her front teeth broken. (Madame Noire)

Ashanti made sure to speak about how much respect she has for Kenashia. The New York musician called her a “beast” for everything she has overcome.

“The next Chapter. My sister is a FUCKIN BEAST! One of the most resilient women I’ve been blessed enough to know. I’m honored to be your older sister..the blood in these veins will NEVER BETRAY. I love you. I’m with you. Always. Happy 31st Birthday. @liltuneshi @wifeofcreation 🎥 @fliphd_life” -Ashanti’s Instagram

According to reports, the alleged attack might be connected to a cheating rumor. Ashanti’s sister and an affiliate of rap star A$AP Rocky might have low-key become intimate.

There was a rumor that SlowBucks beat up Ashanti’s sister for cheating with A$AP Rocky friend. Now Shia has released a video showing results of her altercation with her ex fiance Slowbucks. It appears she is getting ready to show vivid detail into the damage that occured, and the plastic surgery she had to go through. It’s clear she has been through a lot since that incident happened. (Jordan Thrilla)