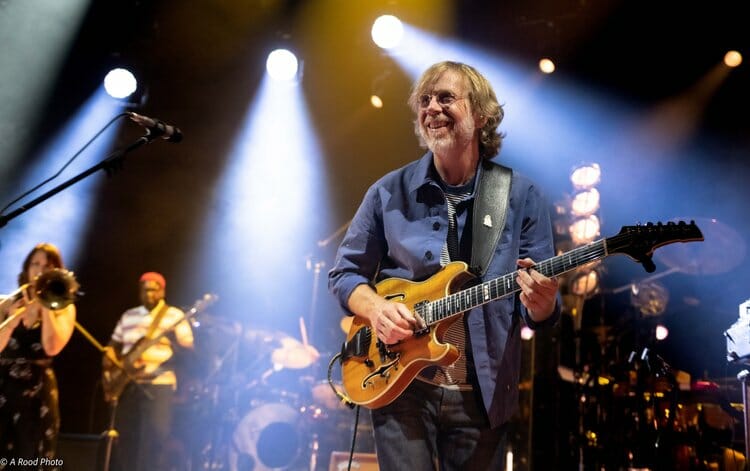 photo credit: Steve Rood***It had been nearly three years since the Trey Anastasio Band last played in Los Angeles.  That two-night, pre-pandemic stand at the Wiltern theatre in January of 2020 was the latest in what was a recurring home for TAB in the City of Angels, registering half-a-dozen performances at the famed venue over a 15-year span.  On this Saturday night, TAB shifted uptown a few blocks for a walloping two-set, three-hour Hollywood Palladium debut.With Phish skipping Southern California on its 2022 schedule, Anastasio’s visit to L.A. became all the more anticipated and rewarding for the 4,000 packing into the circular, mid-century dancehall.  The eight-piece ensemble kicked open the first round with an assortment fit for the venue’s history, emphasizing tight, horn-driven arrangements and a plethora of grooves.  There was the perpetually funky “Cayman Review” and dexterous “Olivia.” Then came the first dip into the Phish catalog with “The Moma Dance,” sensuously glazed in rich vocal harmonies from trumpeter Jennifer Hartswick and trombonist Natalie Cressman.TAB kept the jams mostly at bay early on, and kept the tempos up and moving, dropping back only for the reggae-inflected “Love Is What We Are” and a slow pulsing “Ocelot.” Still, Anastasio’s guitar work was sharp and he did cut loose during the set’s concluding pair of songs: the wailing “Dark and Down,” and the neo-anthem, “Blaze On” the latter featuring an incendiary turn from saxophonist James Casey, newly returned to the TAB fold after treatment for cancer.The second half opened with the poly-rhythmic escapade, “Mozambique,” then shifted to the rocking grind of “Everything’s Right” with Anastasio stretching his solos.  On “Simple Twist Up Dave” and “Night Speaks to a Woman,” the guitarist and his magnificently talented cohorts gave themselves patience and space, feeding off of the unrelenting generator of drummer Russ Lawton and bassist Dezron Douglas.  Anastasio weaved and wowed: trading lines with the keyboard bop of Ray ‘The Milkman’ Paczkowski, dancing through the percussive swirls of the ever-in-motion Cyro Baptista, or coaxing bursts from the horn trio with the simple glance of an eye.As it approached midnight, the Trey Anastasio Band brought the gloom-rock tale of the lumpy-headed “Carini” to a close.  The roar from the Palladium crowd, sweaty and spent, said it all. TAB’s Hollywood debut was another resounding success.