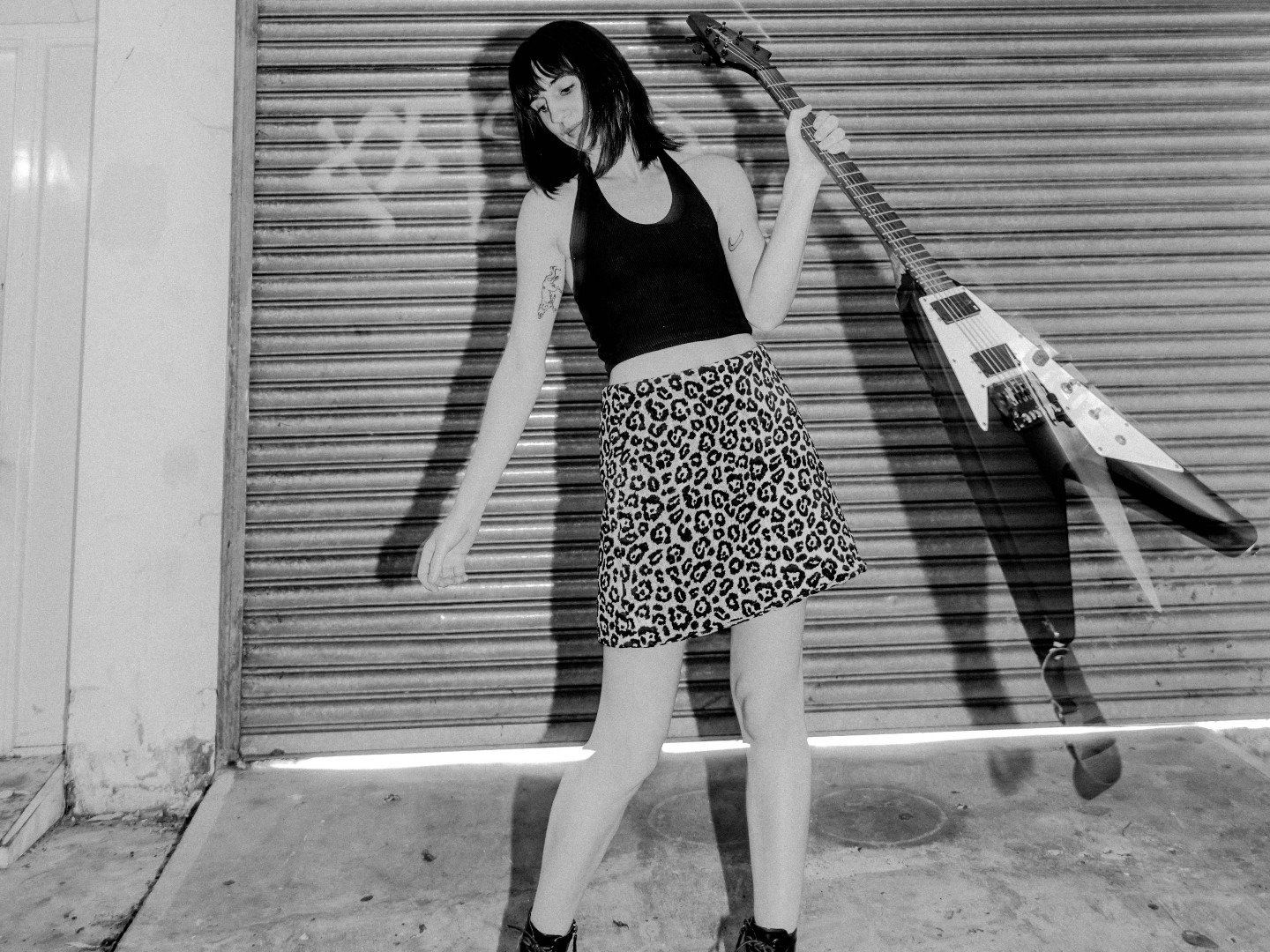 Yumi And The Weather – Howl

Why we love it: Yumi And The Weather is the musical pseudonym of Brighton-based vocalist, multi-instrumentalist and producer Ruby Taylor.  In advance of the release of her second album she has released ‘Howl’ via her own MIOHMI Records imprint.  With its psychedelic instrumentation and honeyed vocals ‘Howl’ has an unusual subject matter, the exploration of body hair, the insecurities which surround it and the power it can provide.

“Looking out the window
To howl at the moon.
Hair is growing on my face.”

What intriguing opening lyrics.  In Ruby’s own words: “Writing this song was an opportunity to reflect on how something so natural can create so many insecurities, while also giving us the power to control it to suit our needs and desires. Growing up, I was occasionally teased and made to feel insecure about my body hair – by both men and women. It created this urge to get rid of every hair in sight in order to feel confident, but it now feels like we live in a time where it’s accepted however we choose to have it. It’s nice, and means it’s not such a big deal to me anymore if I don’t get rid of my moustache as soon as it appears. Ultimately, ‘Howl’ is a celebration of our hair and our care routines.”

‘Howl’ is a garage rock track with a persistent drum beat throughout.  It gallops along without any sense of melancholy, in fact quite the opposite.  The guitar solo seems empowering and provides a vibe of positivity, of taking ownership of ones own happiness, and to never forget that everything will be ok. (Julia Mason)

Why we love it: Future West is the creative outlet of Dundalk based multi-instrumentalist/producer Francis Watters.  Their second album, Who Will Forgive All My Sins is finished and due for release early 2022. Future West have now released the first single from the album ‘Late Last Nite’.

This track begins with a guitar and drum beat before the vocal comes in.  However, this is the not the whole picture of this track.  It has sharp explosive bursts of unexpected energy, as if confirming the frustrations felt during the pandemic and our responses to it, the latter not always how we want to behave perhaps.

The thought-provoking lyrics with a change in key and those background cowbells increase the tension in the track.  It perfectly epitomises the disappointment we have in ourselves after staying up too late drinking indoors during the pandemic.  Such behaviour saps our motivation and this frustration flows over into guitars full of reverb and screeching vocals.  But after a deep breath the chorus returns and a cacophony of synth-pop and pulsating beats takes us to the end of the track.

As Francis expands: “I wanted all the sections to flow in a way that a really bad hangover does, you know when it’s coming and going throughout the day and you’re not quite sure where your head is at? Hence, the quiet choruses and explosive second verse and ending. The shimmering, swelling reverberated guitars and overlapped lyrics in the chorus are my attempt at putting one’s inner struggle with themselves in their head onto record.”

Why we love it: Leeds quintet Eades have announced their debut album Delusion Spree which will be available from 4 March 2022 via Heist or Hit.  In addition, they have released their latest single from the album, Ever Changing.  Infectious, spikey, garage guitars and with a fizz in their music, Eades have produced an art-punk track with sharp stop start rhythms and tight musicianship.  Mid-track a change of pace is injected before ramping up again to the end.  Those guitar riffs are funky and punky.

Lyrically the inspiration for ‘Ever Changing’ comes from the difficult but common situation of navigating individuals who can make life difficult for us with their self-absorbed attitude to life.  Such personalities can have a detrimental effect on our own behaviours

Lyricist Tom O’Reilly further expands: “At that time, I was finding myself in a lot of situations with self-involved characters that I had no interest in, purely because they’re an easy distraction from everything I didn’t want to think about. I kept jumping from toxic relationships to chaotic friendships without thinking I could take a step back and centre myself to actually tackle real problems. ‘Ever changing’ is about burying my head in the sand and avoiding real issues in my life. It’s about finding new ways to procrastinate and change to make each day feel more exciting than it really is.”

Kindsight – ‘Don’t You Grow Up’

Why we love it: Kindsight are a chamring proposition, the Danish group have cooked up raft of singles over the past few years that have captured hearts and got feet moving. Their new single ‘Don’t You Grow Up’ is no different with chiming guitars, gorgeous rhythms, decorated with Rasmussen’s effortlessly swooning vocal that encapsulates nostalgic optimism of summers past, its a gorgeous earworm. This was the first song the band ever wrote together. Written in “a time when we thought to be a sunny teenage rock band, you had to write songs about teenagers in the sun,’

Kindsight formed when front-woman Nina Hyldgaard Rasmussen and guitarist Søren Svensson bonded over a shared love of The Sugarcubes. They went on to recruit bass player Anders Prip and drummer Johannes Jacobsen and over the past few years have earned a reputation within Copenhagen’s scene.

Nosda is a new alias of Endaf who is known for producing electronic music with Welsh Language Vocalists. ‘Hide‘ is his third venture using English lyrics with his music. Here he’s joined by The Honest Poet (THP) for this collaboration. Who has also been making a name for himself in the last few years culminating in the release of his album Letters To My Queen. He delivers an addictive heartfelt verses and a soul pop chorus that rides a pulsing beat and swathes of synths. Refreshing. (Bill Cummings)

Why we love it: Sea Change, the project of Norwegian producer and singer Ellen A. W. Sunde, returns with a new album Mutual Dreaming set for release Feb 11th via Shapes Recordings. The first single from the album ‘Night Eyes’ is an evocative cut, with enveloping tapestry of beats and synths and a vocal that ripples with bruised regret. Weightless and sensual its oscilating somewhere between early Goldfrapp and the Knife, this is medititive moment of letting go.

Speaking about the track, Sea Change said “‘Night Eyes’ is about the need to shut off your head and just be your body for a while – how good it can feel to lose control. I wanted to produce a danceable sensual track, and it’s one of my personal favourites from the album. A friend of mine told me that when she heard it it felt like she was floating in rave space – an image that I absolutely love.”
(Bill Cummings)

Why we love it: The Derby outfit Goddesses transfix with their latest track ‘Armageddon’, a graceful and foreboding song that rustles with textures of percussion, spindly motifs and a ghostly vocal that shivers with the brittleness of humanity, risiding with elememts of the more downtempo moments Radiohead and Talk Talk. This track gradually blankets you in a thick atmosphere and sets sail into a hopeful light at the end of the darkness by the end. “Towards the end of the song there’s a shift to a major key that brings the song out of that darkness, and it changes the mood to one of potential optimism, something that you might find some people would have if the world was ending,” suggests bassist Paul Beal.