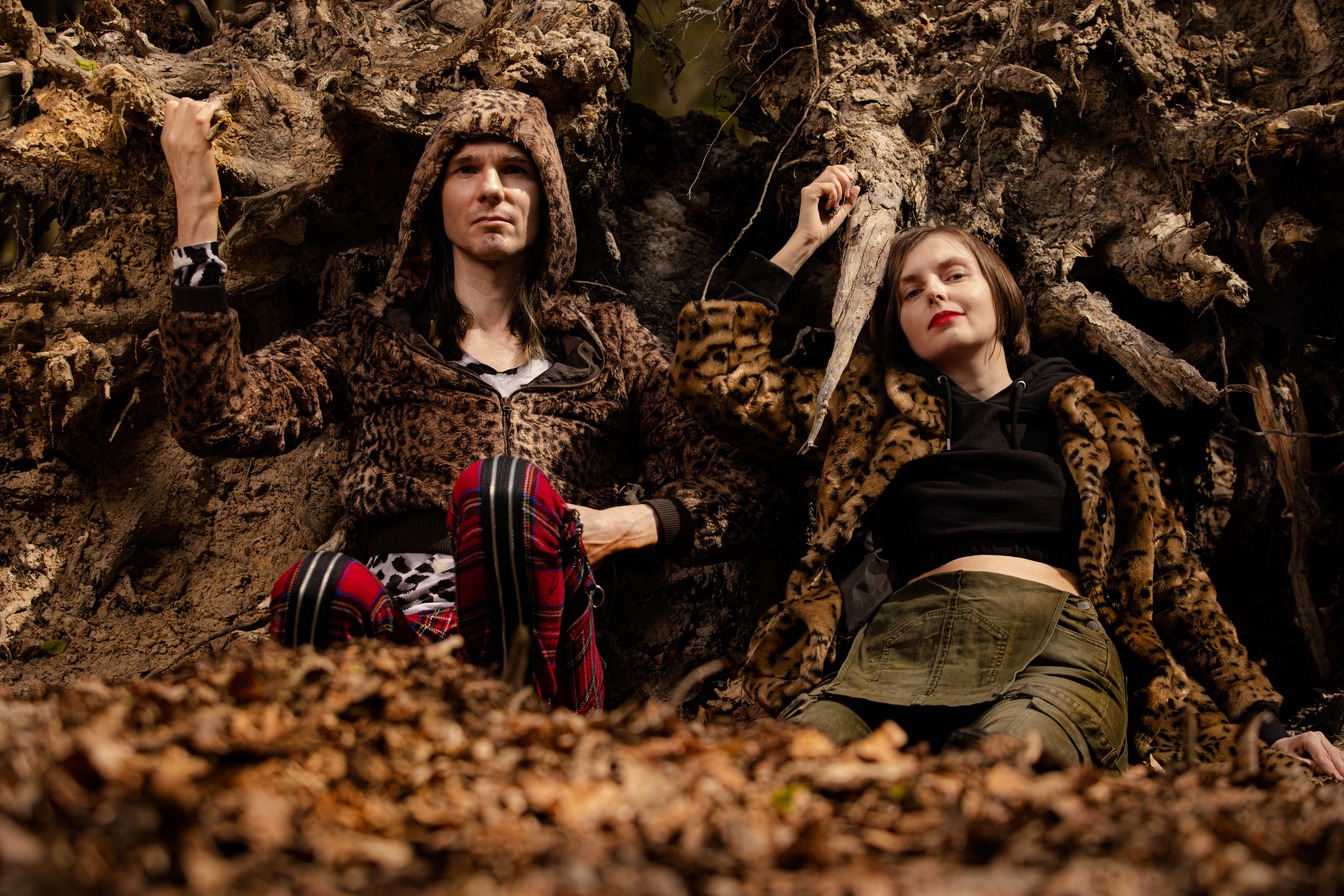 John Clay talks to experimental duo tAngerinecAt and they touch on societal issues in the forms of demons, the clarification of their religious past and yes and the results of a dream as manifest as a short film for their song ‘House of Shards’. tAngerinecAt have arrived.

‘We once had a track about Chugaister – a Carpathian forest spirit who was sometimes portrayed as a wind or vortex. Despite its scary appearance, he was thought to be of a cheerful disposition and he loves to dance and sing.’

John Clay: Thanks for granting me this time to discuss the video for your new track ‘House of Shards’. Before we get started, I would like to know about your transition from Christianity to an atheist outlook and how (if at all) it connects to your creative impulse and results thereof.

tAngerinecAt (Paul): So I went from being non-religious to being a Christian for a short time to being atheist. I’m not sure if that had much influence on the music I create at all. Although some of our music is influenced by Eastern Orthodox liturgy style of singing and recitative.

tAngerinecAt (Eugene): I was a Christian a long time before tAngerinecAt was created. Half my family is religious, and as with children who were neglected and abused by their caregivers, I found comfort and a sense of belonging and family in religion. I sang in a church choir and I discovered that church music and liturgy in general has the ability to take you into a trance, and alleviate depression. When I studied folklore, I found out that a lot of religious singing came from ritual folk so this phenomenon existed before Christianity, and I think that the church adapted and used it.

I was also part of some protestant churches at different times but I always hated the hierarchical structure in churches and the role was given to those that aren’t men and straight. There was a time when I substituted the bell ringer at the main cathedral in Kyiv where before that only men rang the bells. As no one could kick me out just like that, they just cut the ropes at night in the bell tower and said that it was the work of a witch. I was also banned from associating with my closest friend because the church thought that my relationship with her was too close and they didn’t want any queer people in church. I was excommunicated from one church, and it was prohibited to talk with me so I lost all my friends. Also, exorcism was performed on me by a man who thought I was too seductive.

After I left the church, I took part in a forum for people rehabilitating after being in religious sects where I even met some Soviet rock legends. Actually, these religious movements became very popular after the fall of the Soviet Union, perhaps because people who were brought up under a totalitarian regime got used to a rigid hierarchical system and needed a new religion and “a big family” to belong to, with chiefs and worshipers. I also got to know some people who were amongst the leaders in these movements and who regretted how they exploit their power and charisma to manipulate people, some of which even committed suicide. I learned quite a lot from this experience and of course, it influenced the opposition to hierarchy and authority in my lyrics, and I think this was the first impetus that moved me toward atheism and anarchism. I still love Eastern Orthodox singing, and as Paul already said, it influenced our music in some ways but we gave it another meaning and we use its effect that I mentioned above to other ends.

So much history there, and thoroughly comprehensive. Is there any aspect of the aforementioned response that you wish to expand upon here before we discuss your video for ‘House of Shards’?

We aren’t sure what our audience are interested to hear most of all so if they have anything that they would like to ask, they are free to leave comments.

I’d be surprised if they weren’t interested but yes, I’m sure comments from them on various posts would prove valuable. Right then, the video: How on earth did you achieve so much with stripped back production? From what I can tell Ray Moody (cinematographer) handled the lighting and camera work alone? Feel free to correct me.

On some scenes we had help from Ray’s son Spike and Ray’s friend and prop-manager, Dave. Ray’s brother Steve kindly lent us his generator to film in the forest and dropped it off on location. Everybody had more than one role and worked very hard. Also, Ray Moody is a very professional cinematographer with twenty years of experience in the industry who worked on feature films such as Harry Potter, Gladiator, Iron Man 2, and Charlie and The Chocolate Factory (to name but a few), alongside thousands of commercials ranging from cars, food, drink and lifestyle, to music videos and fashion films.

What particular approach to filmmaking in Moody’s work chimed well with the demands of ‘House of Shards’?

The main thing is that Ray really likes our music and this was how he found us. Also, he wanted to preserve the integrity of Eugene’s dream and was completely open to all our suggestions no matter how challenging they were from a technical perspective. And, finally, Ray was really excited about making this video in the best way possible, even if it meant working from morning till late at night. We also really liked the artistic suggestions that Ray brought to the table, and we really like the videos that he made in the past.

Tell us of these artistic challenges?

Are you referring to Ray being open to our suggestions no matter how challenging they were or Ray’s artistic suggestions?

We needed at least three locations because there were many rooms in Eugene’s dream, and they all needed to be abandoned. Also, we already mentioned that we needed a generator to film in the forest.

I’m intrigued to know what Ray’s suggestions were and how they expanded upon the dream. Feel free to describe the dream first if you wish.

Eugene had a dream where he was walking up a flight of steps in a house with many rooms. Each room had objects from the present and past mixed together. There were cracks in the walls in each room. As he climbed higher, the cracks were wider and wider. In the final room on the top floor one wall was missing. Eugene walked to this opening and saw a golden town through the clouds on the horizon with a starlight path leading to it.

Ray Moody suggested that the last room could be the open sea and we really liked this idea. Also, he added more scenes with movements with the hurdy-gurdy including in the mirror. He helped a lot to find suitable locations. He also filmed us in the studio with a green screen so some scenes became possible thanks to his editing work. It was our idea to add the forest room and we decided how to decorate it.

Can you comment on the significance of the decorations in the forest room?

We wanted to use props that were directly related to Eugene’s personal story and his family. There were photos of Eugene’s grandparents on the chest and Ukrainian traditional garments, most of which are antique, including a shirt that was embroidered and worn by Eugene’s great grandmother and worn by his grandmother and then Eugene. We wanted to hang the garments in the forest so they seemed like ghosts of ancestors. Paul also wore one of the garments symbolising the merging of past and present and appears as a ghost in the background. Also, we included a reproduction of one of the Lady and the Unicorn tapestries which symbolises all six senses – taste, hearing, sight, smell and touch that are connected to each other and have been interpreted as symbolising love and understanding.

Does this curation of artefacts lend themselves to your appreciation of ritual? Feel free to really expand upon your answer here.

No, we don’t think so. We like these artefacts because they are unique and beautiful. We also appreciate that there was a lot of work put into creating them, and it’s the only way to create something original.

The photos of my grandparents are not connected to an appreciation of ritual. I keep them because I really love them and it’s all I have left from my family, absolutely literally.

Understood. In our video interview regarding the short film for ‘House of Shards’ you described the latter movements in the footage as a joyful expression. Can you tell us more about this aspect of your performance that perhaps wasn’t covered in our zoom interview?

Paul: Some people think that when things are connected to something underground, of the underworld, mythological, ritual or demonic then it should be perceived as being “dark”, scary or sad. But there is a lot of joy in being different, even if you don’t fit in with social norms. We once had a track about Chugaister – a Carpathian forest spirit who was sometimes portrayed as a wind or vortex. Despite its scary appearance, he was thought to be of a cheerful disposition and he loves to dance and sing. Sometimes he would invite people into a frantic dance that their shoes couldn’t bear but those that we’re able to keep dancing would be rewarded. You can see these influences in the character of Eugene dancing in ‘House of Shards’.

There is a long and valid history where spirits and otherworldly characters sport scary images despite being jolly, happy and benign. Perhaps as an acknowledgement of the duality in natural and societal forces. Perhaps we should blame Disney for a great deal of the beautification of such entities, let alone the reductive framing of the demon. Have you written about such reduction via modernity?

Eugene: I was never interested in Disney, perhaps because my childhood was spent in the Soviet Union, so I only know about Disney personages hearsay. I think that such reduction and division between “good” and “evil” came from Christianity, and I assume that it also is a result of colonialism when some social groups were reduced to being “evil”, “wild” and of the underworld. In some ways, we have the same attitude to nature which is why we have today’s issues with the climate changing.

Paul: I was going to say the same about Christianity and especially the character of the devil which definitely wasn’t created by Disney.

Eugene: By the way, thank you for this question, John! This actual topic is the subject of our next single created in collaboration with Norwegian artist Runa de Luna that we plan to release this winter. It touches on the ancient roots of why the attitude to queer identities, gender nonconformity and disagreement with hierarchic structure became labelled as something demonic and dangerous.

It’s tempting to talk about your next single but for now, ‘House of Shards’ is out and your video is hopefully being enjoyed by many fans old and new. Any parting words on either the song or the video before we close here?

It was a little spoiler exclusively for readers of God is In the TV!

It seems it’s time to watch and listen now. Where can people do so?

Please, follow us on Spotify, YouTube and on social media so you don’t miss future releases and even more interesting interviews. We will also be very happy to hear your feedback. Thanks a lot, John, for the thought provoking questions! Hope to talk to you again soon.