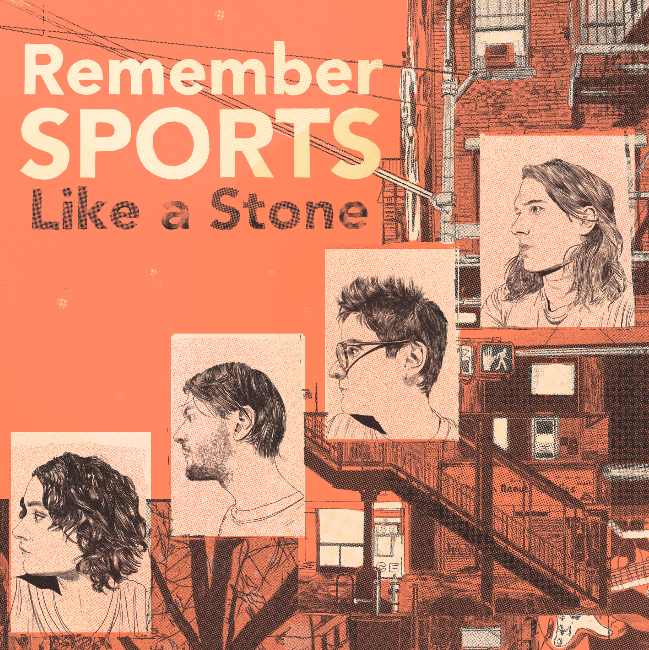 Who knows where the time goes?  It doesn’t seem like seven years since Remember Sports thrashed forth from their practice room basement and released their debut LP Sunchokes, charged with conflicting forces.  Youthfully optimistic verve coexisted edgily with the uncertainties of finding a path through the boiling lava of early adulthood, making the band’s songs feel ever so human in their emotional contradictions.  Even album one, track one, ‘Tiny Planets’ took us swiftly from “Flying side by side,/ This is worth a try,” to “Impending atrophy,/ This is killing me.”

Despite their youth, they’ve consistently demonstrated a preoccupation with the passage of time.  The longer we live, the more we are able to look back upon and remember.  ‘Looking back’ tends to involve reviving more reminiscent thoughts and nostalgic memories.  The alternative, which we find in Remember Sports’ songs, involves dwelling within your memories, where the past temporarily invades the present.  An awkward stasis ensues.

Their first and second albums had less to become riled about (someone’s else’s jeans, Crossfit, washing-machine-clothes-shrinkage and babysitting stress dreams).  2018’s Slow Buzz upped the ante, however, with the bitter taste of a break-up: “I’m not going back./ You’re not coming back.”  2021 sees a further step up the existential ladder on Like A Stone, as chief lyricist, Carmen Perry breaks up with significant aspects of herself: most notably with an eating disorder and her relationship with Catholicism.  What really characterises the developments in album four is how present it sounds in comparison to its forebears.  It’s still as zen as a treble espresso poured onto a hangover and as pensive as an introvert in an over-thinking contest, but the narrative feels sturdier, more resilient – like it’s building foundations for a calmer future.

Arguably, the slower and steadier songs of the twelve stand out.  We’re served some of the fuzz, buzz and scuzz that we’re used to, but elsewhere, we’re drawn in by the Nashville stylings of ‘Eggs’ and ‘Odds Are’ – about diminishing fertility and leaving a town respectively.  Granted, they don’t sound positive, as topics go, but the former concludes with, “Take care of the tender things that flower in your gut,” (not digestive bacteria) and the latter with, “I don’t know why, but I think my odds are good this time.”

‘Materialistic’ is a hazy, longing waltz.  We feel like we’re ‘in hold’, dancing dizzyingly with life’s literal and figurative ‘shit’, the detritus that we accumulate.  Can we ever disengage?  When memories threaten to rise up and become overwhelming, and similarly when Jack Washburn’s guitar break is about to make everything turn lachrymose, Perry cuts back in again with the ultimately empowering instruction, “Push it back down.”  ‘Out Loud’ is a wonderful slice of late 80s/ early 90s indie pop.  It even sounds like it’s wearing an enormous, over-sized jumper.  At almost seven minutes long, it’s the equivalent of four of their 2014 songs.   Conor Perry’s drumbeat shimmies.  Catherine Dwyer’s bass will have you shoulder dancing like Jemaine from Flight of the Conchords.  It rests within a delicious triangle of The Sundays, 1000 Maniacs and Alanis Morissette.

And as Alanis herself said, “You live; you learn.”  Ideally, that process is cathartic.  That’s certainly how Like A Stone feels.

See the video for ‘Materialistic’ here:

‘Like A Stone’ by Remember Sports is out on Father/Daughter Records on April 23rd.