Manic Street Preachers’ final live date of 2021 sees London’s own Public Service Broadcasting opening the evening.  Clad in white and blotted out by scorching stage lights, the art rockers deliver gut-punching, sleek tracks (highlighted by vocals from guest artist EERA).  Featuring new songs from their latest album Bright Magic as well as the Apollo mission-inspired ‘Go!’, PBS’ set is a luscious combination of sights and sounds; a good primer for the new and the would-be fan, their trademark screen-shows of remixed archival footage and vintage films give the set context and depth.

The loose-knit crowd tightens in anticipation as the Manic Street Preachers slide onstage and crash into ‘Motorcycle Emptiness’.  Their latest album, The Ultra Vivid Lament, debuted at number 1 on the UK Albums Chart upon its release in September; they’re celebrating 35 years together as a band and have the back catalogue to match.  Overflowing with pent-up, going-sour lockdown energy, the trio have been enjoying their here-and-there, intermittent tour.  This Wembley gig is 2021’s last howl, and when the Manics howl, their fans howl back.  MSP shows are interactive; tonight, James Dean Bradfield and Nicky Wire are engaged and engaging, inviting the whole arena to handle the choruses (drummer Sean Moore is, as usual, reticent behind the grand clamour of his drum kit).  ‘You Stole the Sun From My Heart’ becomes a community effort; ‘Love’s Sweet Exile’ is an exercise in togetherness.  The concept of loneliness is prevalent in the Manics’ body of work (tonight sees performances of ‘Your Love Alone is Not Enough’, ‘Enola/Alone’, and ‘Happy Bored Alone’), but Manics fandom has always had the flavour of a secret society.

Bradfield and Wire are positively perky, contrasting with the Generation Terrorist-era footage of the band on the screen behind them, in which they wear sunglasses indoors and self-consciously-disdainful expressions.  At this point in their careers, the band can afford to look calmly at their younger selves, celebrate the glamorous old days with JDB’s smashing solo acoustic rendition of 1993’s angsty ‘La Tristesse Durera’, and thank the audience for “giving me [Nicky Wire] a chance to get out of my f*cking tracksuit.”  They were young, and now they’re middle-aged, and they’re comfortable with both their past and their present. 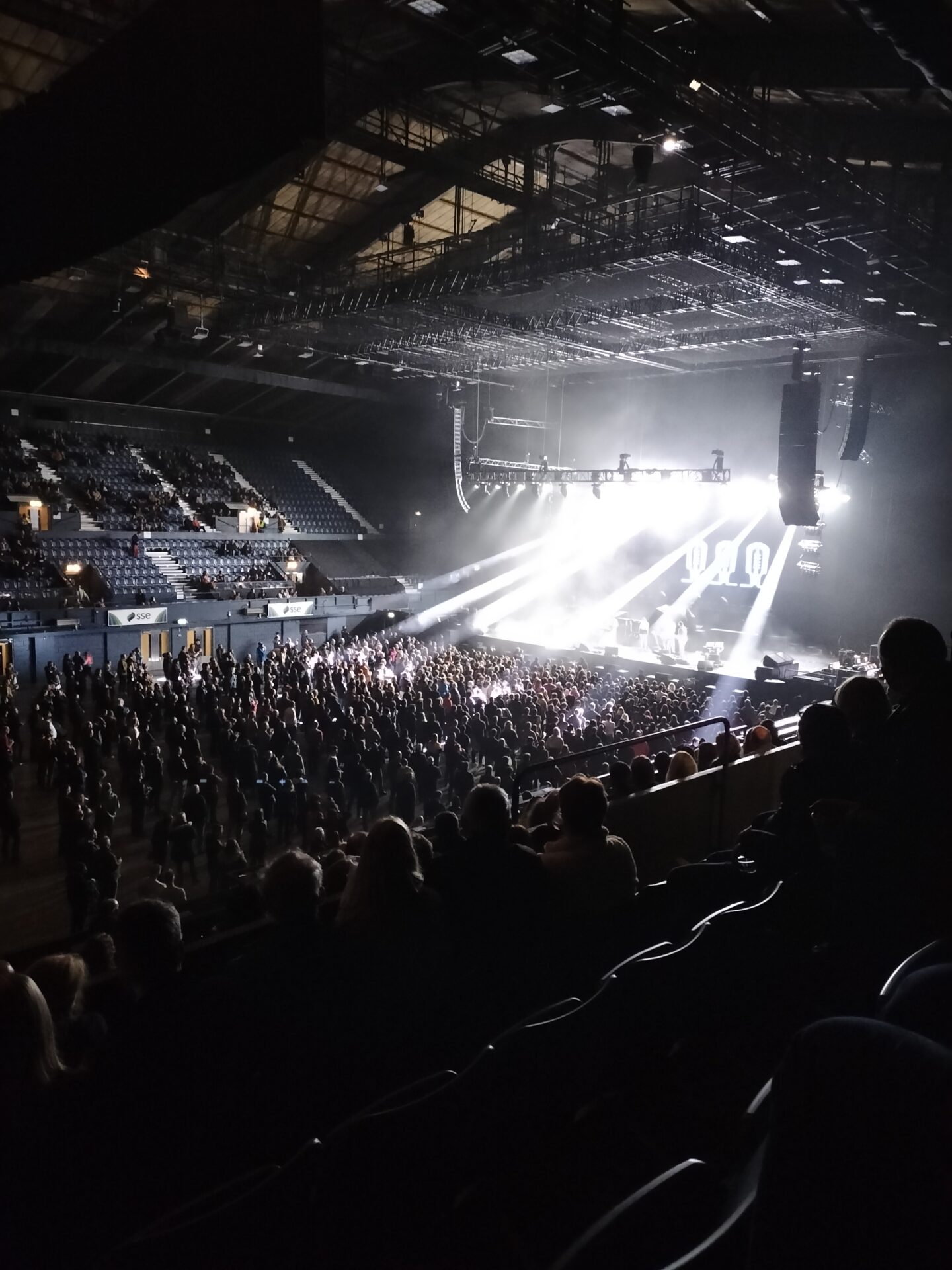 The setlist bounces between the band’s 1990s singles and tracks from The Ultra Vivid Lament.  The newer songs are given due attention and energy, but it’s clear the band are feeling nostalgic: between older tracks, Bradfield yells, with a grin in his voice, “f*ck it, let’s stay in the ‘90s!”  Nicky Wire is elastic, buoyant, punctuating his performance with his trademark scissor kicks; he’s the upside of manic.  A rare treat in the form of a cover version sweeps the auditorium; paying tribute to late producer Steve Brown, the Manics cover The Cult’s ‘She Sells Sanctuary’.  It’s gorgeous, it’s faithful to the original, and it’s destined to be all over YouTube.  It’s also the perfect segue into 1991’s punk-tinged ‘Motown Junk’.  Bradfield spits those lyrics out with the same vim he’s done for gigs immemorial, and a thousand middle-aged audience members sing along: “Twenty-one years of living and nothing means anything to me”, remembering a youth in which they meant it.

“You love us!” snarls Bradfield, tearing into one of the Manics’ most iconic songs.  It’s another shouter, with the crowd on the ground bouncing en masse and the seated carrying the tune to the rafters.  The night ends, as MSP gigs always do, with “A Design for Life”; famously, Manic Street Preachers disdain encores.  That euphoric secret society of Manics fans files out of the auditorium, taking with it the echoes of Bradfield’s brutal voice, the crash of Moore’s percussions, and Wire’s liquid baselines. See you next year, boys.