The common buzzard is a medium-to-large bird of prey that has a large range. But this is no common buzzard. This is Buzzard, thrice. Therefore, they are at least an extra-large to a colossal bird of (rock) prey that has a humongous range. The Cardiff based octo-pedal beast are playing their first of a doubleheader at The Social in London, a short double denim hop from Oxford Circus.

Ripping into opener ‘30,0000 Megabucks’, and storming through an opening gambit of ‘Late Night City’, recent single ‘Crescent Man v Demolition Dan’ and current single ‘You’, it is literally impossible to not have a ridiculous grin across your face. Even a miserable git like me is doing a Cheshire cat impression.

Whilst many may argue that they aren’t reinventing the wheel with their glam-tinted fat bluesy boogie riffs, this particular wheel is such a perfect sphere that it rolls around just fine and dandy thanks and caresses the lug holes with the tender touch of a sledgehammer to the synapses. Just what the otolaryngologist ordered.

Not enough bands are having fun at the moment. Everything is very serious currently, megalomaniac governments, arseholes on every street, viruses airborne and deadly, for the love of Jesus Christ (or you preferred sky wizard) light relief is in short supply. Even the nations favourite TV show currently is about a game where everyone is slowly picked off and extinguished (which I’m sure is a metaphor for life, currently) but for an hour tonight we can forget all our troubles, forget all our cares and go downstairs at The Social and lose our shit.

If we’re all still here come February, Buzzard Buzzard Buzzard are releasing their debut LP, Backhand Deals. The aforementioned singles will appear plus early 2021 single ‘New Age Millennial Magic’, and brand new cut tonight ‘Break Right In’ which suggests this record is going to be a blunderbuss to the gut.

As the band move into the next phase, highlights were some of the oldies and goldies (2019 seems like a lifetime ago) ‘Hollywood Actors‘, ‘John Lennon Is My Jesus Christ’, ‘Double Denim Hop’ and ‘Love, Forever’ melted hearts and faces. 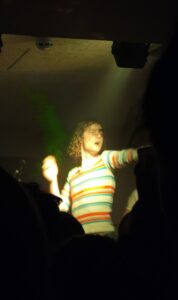 Tom Rees may have borrowed his moves from Mick Jagger and Marc Bolan, but his enthusiasm is infectious. It is true that a motionless and monosyllabic band can be mirrored by an attentive but stationary crowd, but Rees is a ball of energy and gregarious anecdotes, which he quips are there to make up for lack of material, which isn’t true as there were a few omissions from the EP/Mini Album The Non Stop, such as ‘Stockholm City Rock’ and ‘Sugarloaf Mountain Crucify Me’, but the big hitters are all present and correct and our skins are dripping from our skulls.

What this band needs, and hopefully will come their way with the album, are big rooms for them to spread their wings. They play Scala, Kings Cross next year which will give Tom much more space for his high kicks and shimmying.