knifedoutofexistence – I Find Myself Dwelling on the Sick (Brachliegen Tapes) 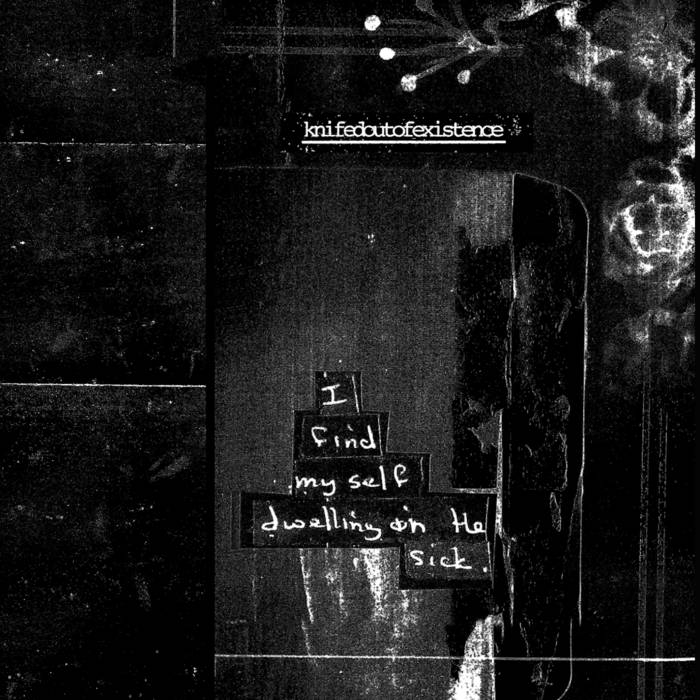 There are some artists that every time they release something new it speaks to me in a way that I wasn’t expecting but find exhilarating. It might not be what I was expecting but it was definitely what I needed. Artists like S. Hollis Mickey, BLACKCLOUDSUMMONER, beautywork and Coby Sey always deliver the goods. Their music touches me in unexpected ways and makes me glad I stumbled upon them. Another one of these artists is knifedoutofexistence, AKA Dean Lloyd Robinson. As well as making music, Robinson runs the label Outsider Art which regularly puts out releases that live in my stereo, and head, longer than they have any right to. His latest album ‘I Find Myself Dwelling on the Sick’ is his most personal album so far, and one that sees him absolutely nail every part of the production process.

The opening track ‘Life as Ransom’ is the ideal way to start the album. Everything is laid before us. It’s the sound of someone who has had enough of the lies. The selfishness and the fear. It’s the sound of someone wanting to get everyone to pull together, for once, and just do what benefits the majority rather than lining the pockets of a minority. It’s also incredibly abrasive. Even for Robinson, this is something else.

If I’m being honest ‘I Find Myself Dwelling on the Sick’ is the strongest album Robinson has made to date. The textures are beautiful, if not a tad terrifying. There is a lot of skill on display. His ability to seamlessly mix field recordings, dank drones and searing noise is fantastic. It’s also his most challenging album. Given the times that we are living in, this shouldn’t be a surprise. What is surprising is despite all the noise, and confusion, that Robinson creates, there is something generally touching about it. There are moments of defiance going on. ‘An End to All Our Suffering’ feels like an anthem for doing the right thing.

The standout track is ‘You Personally’. It really gets under your skin. From its claustrophobic opening everything just builds and builds until you have this white-hot ball of seething noise. Here we have everything that Robinson is know for. Wailing feedback. Guttural, indecipherable vocals. Layers, upon layers of harsh noise. It sounds like everything is on fire and the people are rejoicing. Imagine The Wicker Man in a post-industrial landscape and you’re on the right tracks. It also reminds us of what noise/experimental music can be. So often it’s just feedback with no thought behind it. Here we see an idea so well thought out and executed that I feel sorry for the next album I listen to, as it’ll sound very diluted indeed. Its easy to say Robinson has done it again, I just did, but he really has. After listening to ‘I Find Myself Dwelling on the Sick’ I’m almost speechless about what I’ve just consumed. This is a brave album that asks serious questions while showing society itself in a mirror. Warts and all. And for that, we should be grateful.