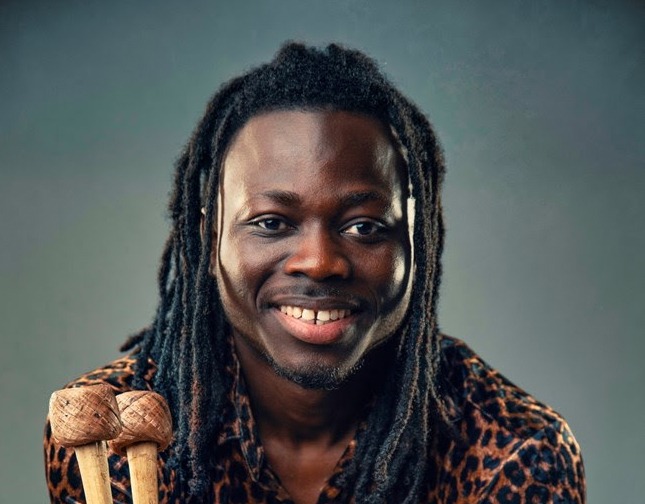 On a very un-rock n roll mid-week mid-morning when we chat over Zoom, N’famady Kouyaté is bright and cheerful as one of his notorious shirts.  The singer, percussionist, multi-instrumentalist is in Cardiff and has every reason to be in high spirits.  The truly international artist – hailing from Guinea in West Africa but now living in Wales – has a debut four track EP ‘Aros I Fi Yna’ out on Libertino, combining traditional music from his country with new energies from his life in Wales. He fuses both together and creates something very special indeed.  None of this would be possible without the presence and guiding influence of his beloved balafon, a traditional wooden xylophone, its history interwoven with that of his family both present and past.

His smile widens even more as he talks of his favoured instrument. When his ancestor played the balafon for the first time back in 13th Century he explains, its then owner had never heard such a beautiful sound emerging from it.  ‘”So today I learned it’s good to have someone shouting about you, than you shouting about yourself” he said and offered the balafon to my ancestor,’ N’famady says.

The family surname  Kouyaté or variation on it means ‘there is something between you and me’ and was birthed as the balafon changed hands, and what a wonderful sentiment of respect that is.  ‘I am a descendent, a long line. So balafon is in my blood, balafon is my family history. It is the first instrument I learnt, the main instrument all of my family play as well.’

N’famady was taught how to play by his mother as an infant. Malinké in origin, he was born into a griot/djeli family, preserving traditional Mandingue culture by sharing ancient rhythms, songs, and stories.

The single from the EP the celebratory ‘Balafô Douma‘ (‘It’s great to play balafon’) is literally international in its creation. The music was recorded at the legendary Rockfield Studios in Wales, before N’famady jumped on a plane to travel back to Guinea to record his vocals and also have his sister harmonizing. ‘I wanted a female voice from Guinea because of the language and sound,’ he explains. It is very much a family affair; ‘Balafô Doum’ in part pays tribute to his mother.

‘There are two things going on. Advising somebody to get up and go to play balafon or something but also I’m telling the example of my mum who taught me the balafon,’ he says of the song.

N’famady turns to affairs of the heart on the EP’s title song ‘Aros I Fi Yna’ (‘Wait For Me There’), an expression of sweet sentiments. Featuring gorgeous backing vocals from  Lisa Jên of the legendary 9bach  is simply joyful. ‘It’s a romantic love song. In Guinea we song a lot of love songs . My music is to make people happy,’ he smiles.

The EP features Kliph Scurlock (former Flaming Lips) and also Gruff Rhys. N’famady supported the Super Furry Animals frontman and played in the touring band for his ‘Pang!‘ album.
‘Gadael Y Dref’ (‘Leaving the Town‘) is a traditional Mandingue song given a 2021 Welsh twist, the lyrics co-written with Rhys. It’s gentle and reflective.

‘Everyone sings it in their own way. I did a West African – Welsh fusion version, it sounds a lot more Welsh. I decided to do it with Gruff because when I (toured with) Gruff  it was one of the songs I wowed the audience with!  They really liked it and at the end of playing people were singing the song in my language.’

N’famady laughs and sings a bit of it.

‘That also stayed in the minds of the musicians that were on the tour, I could hear them singing (sings again) and I thought, ahh these guys love this song!’
‘The day I heard Gruff singing it in the studio in Cardiff I was like, wow. It gave me a lot more imagination, something else. A welsh feeling going on. It was so beautiful and I thought, this song is half Mandingue and half Welsh.’
It’s obvious he like the American Scurlock has a strong sense of kinship with the music community in Wales, and become part of the landscape.

I feel like I’m in my own country. I feel comfortable, I’m describing my music today Welsh music because I live here and make music here. All my musicians are Welsh, there is that welsh feeling. And the fact that Gruff take me on his tour from 2019 that opens a lot of curtains. Two really different contexts, Mandingue to indie Welsh pop. But we made it!’

It’s a rare occurrence for an artist to burst into song in an interview but  N’famady does this not once, not twice, but thrice. (‘the other instrument I am really frond of the African drum called djembe. That one, and the guitar.  I am always with the guitar Let me show you!’) And very much appreciated and enjoyed it is from this end too. To be fair on the man, he’s got a lot to sing about.

‘Aros I Fi Yna’ is out now through Libertino.