IN CONVERSATION: Hamish Hawk ahead of release of new album ‘Heavy Elevator’ 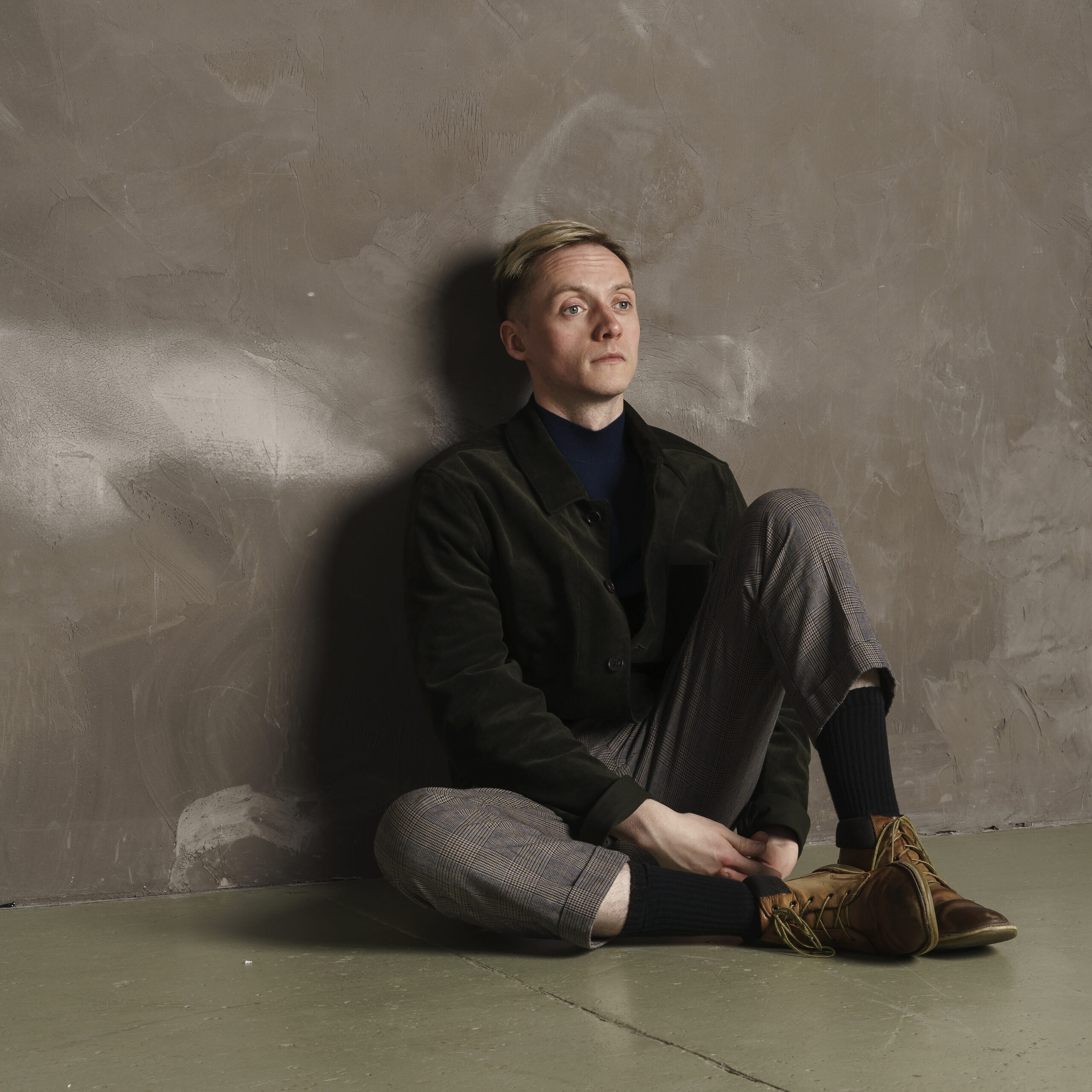 Hamish Hawk’s music is refreshing and intriguing in our current music landscape packed with post-punk bands.  The Edinburgh musician has a quirky view on the world which seeps into his music.  Expect to be surprised, delighted, entertained, moved and informed by his songs.  The release of his new album Heavy Elevator this week is much anticipated, particularly as three of the singles from it have made the BBC Radio6Music playlist, which is an achievement in itself.  Andrew Pearson (guitars) and Stefan Maurice (keys, drums) form the core of his band and for the first time Hawk has collaborated with these musicians to create Heavy Elevator.  The first single ‘Caterpillar‘ grabbed the attention immediately and the video was directed by Ellen de Faux who was nominated for a 2021 Grammy as one of the producers of Harry Styles ‘Adore You’ video.

“Heavy Elevator reads like my diary,” says Hawk of the album.  “It’s just about all in there, and it goes way back.
The teary-eyed losing your mum in the supermarket stuff.  The awkward teenage thing.  The lost twenty-something.  The chance encounters, the half-remembered conversations, the witching hour panics, the hostile takeovers.  There is more of me in it than any album I’ve written previously.  It describes the feeling of reaching the heights you promised yourself, replaced all too often by the feeling that you’re sinking.  Heavy Elevator sounded about right.”

Ahead of album release day I was delighted to have a chat with Hamish.

Congratulations on the release of your new album.  Could you tell us a little about the challenges of writing and recording this album, as I suspect it was impacted by the global pandemic.
Oddly enough, it wasn’t!  The album was recorded some time ago, back in September, 2019, so it was safely in the bag by the time the world turned topsy turvy – thank goodness!  It wasn’t without its challenges though; a number of the songs had a fair few iterations before we landed on the final draft, and some were more slippery than others.  Some of the lyrics nearly killed me!

The album is produced by Rod Jones (Idlewild) at his Post Electric Studio in Edinburgh.  Am I right in saying that your working relationship with Rod grew organically after first meeting him at the Iona Village Hall festival in 2016.  How important has that been for you, particularly in relation to Heavy Elevator?
You’re absolutely right.  Rod has been a tremendous asset throughout all of this; he’s long been a supporter of the music we’re making, but since we joined forces officially, I’ve been truly overawed at his work ethic, his expertise, not to mention his networking capabilities!  A huge amount of what we’ve achieved this year is down to his hard work.  Let this answer serve as a thank you!

You have released four singles from Heavy Elevator, ‘Caterpillar‘, ‘Calls to Tiree‘, ‘New Rhododendrons‘ and current single ‘The Mauritian Badminton Doubles Champion, 1973‘.  Congratulations on getting Radio6 Music airplay.  What can we expect from Heavy Elevator as a whole?
Thanks! It’s a good question.  I listened to the album in full for the first time in a wee while the other day, and I suppose what struck me first is how varied it is.  Whilst recording, we treated each song as an end in and of itself; I don’t recall us being particularly hung-up on how the songs would fit together.  Each song is an island, and as such each has its own unique landscape.  I find it’s a really rewarding way to work, treating every song as a totality.  Each one has to stand on its own two feet.  If variety is a spice, I put it on everything.

Your song-writing is full of imagination, combining the whimsical, the personal and the real world.  Where does the influence for your songs come from?  Do you begin with the gem of an idea, or the full lyrics for a track perhaps?
It really depends.  More often than not, I’ll have a particular word, phrase or couplet that I’m convinced is the foundation for a song.  I’m endlessly making notes of phrases I like, so I’ll sift through lots of them before I start writing proper.  After that, it’s anyone’s guess where a song ends up.  I find I make connections whilst writing I could never have predicted; it all takes on a will of its own once I’m a couple of lines in.  Sometimes songwriting is a very intentional process; other times it’s like you’ve fallen into a dream and woken up with four verses and a chorus.  More often than not, you come away with three verses and no chorus. I think that’s just me.

You are one of the artists with Wide Days 2021, the organization in Scotland which looks to showcase emerging talent.  How important are they in developing musicians? What are you hoping for in the year ahead?
Working with Wide Days has been a real pleasure.  It’s so easy to say all the right things about supporting local music, but to work this closely with an organisation that cares so deeply about burgeoning Scottish talent, and supports it every which way it can, it’s just so refreshing, and so massively appreciated.  Scotland is bursting with incredible artists of all shapes and sizes and Wide Days do such a brilliant job at ensuring their showcases are diverse and exciting.  To have them behind us as we move forward into a busy year of gigs is just the icing on the cake.

If I looked in your fridge right now what would I find?
You would find a jar of coffee and very little else.  I’ll send you details of my next big shop.

Heavy Elevator is released on 17 September via Assai Recordings.
For more information on Hamish Hawk please check out his facebook, instagram and bandcamp.