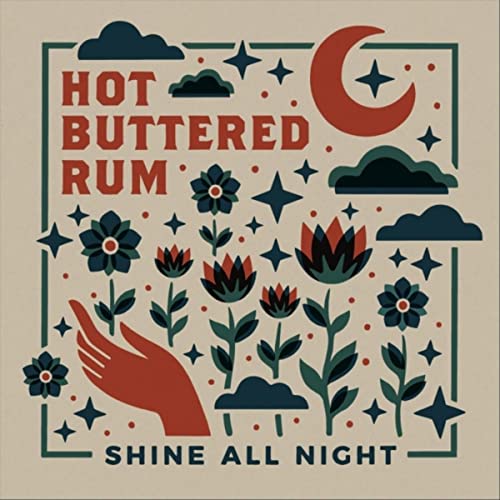 In a brief description of Shine All Night prior to its release, Hot Buttered Rum explained that their new songs, written during the trying times of the pandemic, are “bigger and louder than any the band has ever released,” their aim being to “to provide some cheer in the times ahead.” If fans were worried that a radical change in direction was forthcoming—that perhaps the sextet had gone doom-metal-meets-bluegrass or some such—then they can calm down. While a track or two display a bit more push in the rhythm department, it’s still mostly banjos, guitars and mandolins leading the way, along with the tight harmonies that have characterized HBR since day one. With the songwriting split roughly half-and-half between string-wielders Erik Yates and Nat Keefe, there is, however, a direct, pronounced connection to the pandemic residing in several of the new tunes. With its references to a “long, dark highway” and “long, dark winter day,” Yates’ “Find My Way” sets the lyrical tone that marks several tracks, projecting a sense of hope and vigilance that wasn’t always easy to conjure at the peak of COVID. But those “long, dark” times don’t batter the listener over the head; the up-tempo, uplifting sounds of the acoustic instruments and the propulsive bass and drums dominate, and by the end, those daunting times have given way to “digging my heels in.” Even the album’s ballads and midtempo tunes, most notably Yates’ moving “Broken Glass,” never stray far from the light that peeks through that darkness. Ultimately, Shine All Night is a beacon, a salve, not the least bit scary at all.