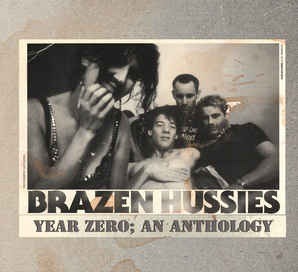 Brazen Hussies were an absolute mess of a band. That’s not me being unkind, incidentally, it’s generally how the former members themselves view that period of their lives, as implied by most of them in the entertaining sleeve notes.

“The band only ever ‘officially’ released 5 tracks,” it informs us in the booklet. They were ‘Touch It‘ on 1997’s Snakebite City compilation, 1999’s ‘Living In Fear Of Reprisals‘, ‘The Whole World Envies Us‘ from the Maximum Wage compilation The Bureau Of Dissonant Cultures, and the Peoplesound EP, which featured ‘Superisolate‘, ‘Forgot More Than I Ever Knew‘ and the ‘lost’, charmingly titled ‘Shit My Pants‘.

The songs here are ramshackle and often unsure whether they want to be The Stooges, The New York Dolls or Roxy Music. They definitely wanted to be Richard Hell. You can see why they divided opinion – note the various reviews reprised in the notes for your delectation. It’s fair to say that the NME and Melody Maker held vastly different views on the credibility of Brazen Hussies as purveyors of musical art, the latter publication going as far as dubbing them ‘Cream Of The Crap‘.

Personally, my feet are in both camps. You can practically experience the scuzzy ‘toilet’ experience of the gigs yourself as you listen to Year Zero. Some of the tracks here are incendiary brilliance, but none of the recordings are anything other than ramshackle. Sometimes it sounds like an eccentric, drunken pensioner shouting angrily after somehow getting stuck on a roof, and almost all of the tracks are riddled with the same kind of bare-bones non-production that was favoured by the likes of Jacob’s Mouse in the 1990s.

What’s interesting though is that, when they did rein it in a bit, the effects were quite striking – ‘Salt Leak‘ for example was reminiscent of Pixies‘ ‘Is She Weird?‘ with its surprisingly melodic, stripped back timbre and stands out as a result.

Many of Brazen Hussies’ best tunes were those in which Lou McDonnell assumed lead vocal duties, notably ‘Thin Lips‘, a track at the time astutely compared with Sleater-Kinney, but for me, far and away the best track here is ‘Scrape‘, with its filthy driving rhythm and a career-best performance from frontman Dave Queen. If it were possible to actually see a song sweat, then this would be it. And ‘Wet Shelter‘, which follows ‘Scrape‘ on this compilation, is another corker.

So in summation, around half of the songs here are much better than you’d think they have any right to be, given the ‘don’t give a fuck‘ attitude that is oh so apparent. The rest of the tracks range between ‘not bad‘ and ‘You just hurt my ears!‘ but without doubt, Brazen Hussies, who, let’s face it, you almost certainly forgot existed, are a band worth re-evaluating all these years later. This release is absolutely a testament to that.