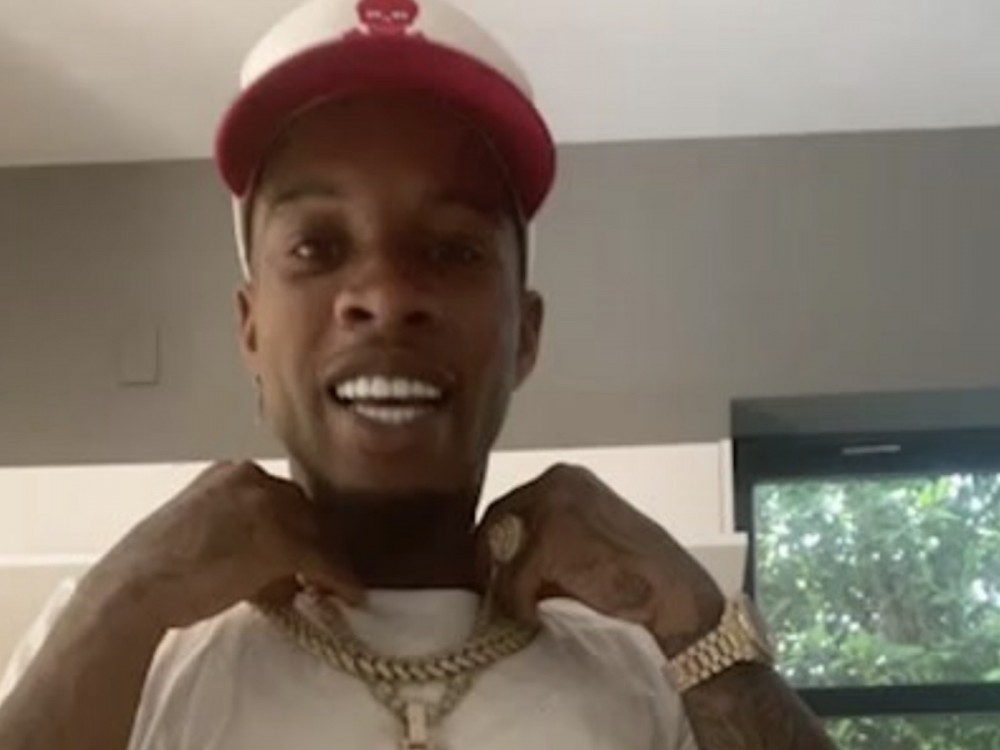 Rap crooner Tory Lanez wants big respect placed on his name. The hip-hop star has stepped up to speak on his When It’s Dark NFT rollout and how his desperation tactic is the biggest victory for every independent artist around the world.

TL went to his Instagram page and kept things 100 on his recent behind the scenes struggles. Lanez acknowledged the industry blackballing his presence on digital streaming services’ playlists had him seeking a higher power for guidance.

“They took every single avenue away from me. They took the playlists away from me – and you know what I said, bro? I said, ‘This isn’t on me. This isn’t a me thing anymore.’ This isn’t a Tory versus the world. You know what I did? I immediately went to praying. I immediately went to straight praying. I said, ‘God, show me a way. Show me what I can do here. Show me a way. Show me something that’s different.’ When the world is standing against me, show me a different way. And I prayed, I kept praying, kept praying, kept praying and God told me he was going to bless me a thousand times over to the point I’m praying – it’s like God starts speaking through me – they was blocking me in every type of way. And for a second I said I wasn’t going to question it – every time they tried to stop me, I kept praying. I kept going.”

Lanez didn’t stop there. Tory continued to explain how his launch of his first-ever NFT album benefited both himself and loyal fans. TL further detailed how this power move ultimately could take down the record labels and streaming giants and empower musicians.

“If y’all not fully understanding let me explain this to you. 1 dollar for the NFTs, right? I sold these sh*ts to my fans for 1 dollar. People came. Some people bought 20, some people 5. Some people bought 60. I doesn’t matter how much you bought, it was only a dollar. For 60 bucks, you bought 60. I need y’all understand. One of those copies is going for 50,000. 60,000. And these are sold. Go look at the list right now. See how small the seller’s list is getting. Y’all understand what the f*ck is going on? I just cracked the f*cking industry. Y’all don’t understand I just cracked this sh*t? This whole sh*t is over. I cracked the whole sh*t. It’s over. No more middleman. All y’all artists out there, f*ck the label. F*ck the n*gga telling you I got you for this day on Spotify. F*ck that. Y’all gonna get paid and your fans are gonna get paid. They’re coming to you, why? Because y’all making money together. It’s the digital trap house, welcome n*ggas. Your f*cking welcome. We here. You understand why I’m going so crazy? I can’t believe I did this sh*t my f*cking self.”

Earlier in the month, Lanez announced his newly released NFT project literally sold out in less than 60 seconds.

TL went to his Instagram page to break the massive news to followers. Lanez announced his million copies actually disappeared in under a minute.

Hours prior, Lanez hit up his Instagram page to share a clip from his must-see When Its Dark NFT freestyle. Tory credited hitting nearly 11 million followers for giving him the motivation to drop the visual.

Lanez did much more than just drop some new music ahead of his When It’s Dark NFT dropping. Tory released his freestyle’s visual treatment and referenced having zip-zero problems jacking anyone’s style and flow – notably rap rival Cassidy‘s.