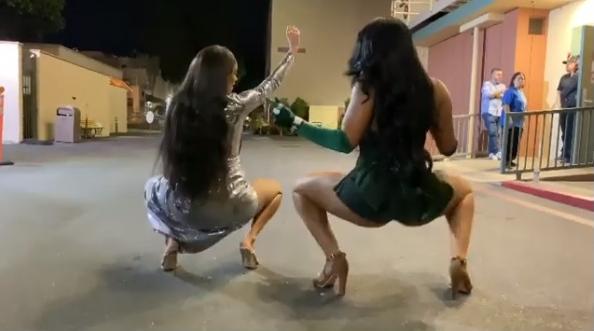 Watch out Megan Thee Stallion — we’re coming for your knees. New research studies are linking squatting (and twerking) to better health and we’re here for it.

From bouncin’ in New Orleans to West Indian dancehall to the Houston hot girl, Megan The Stallion,  twerking has become an international phenomenon enjoyed by hotties the world over.  Now, a new study tells us that the act of squatting (and twerking) is actually good for your health.

A fascinating new study of hunter-gatherer tribes people finds that hunter-gatherers are just as inactive as the rest of us, but they’re not couch potatoes.   Their approach to inactivity does not involve chairs or sitting.  Instead, they squat a lot.

There have been several studies linking sitting with increased risks for poor cholesterol profiles, heart disease, diabetes, and other conditions — even among people who exercise.   Based upon the results of the hunter-gatherer study, the difference between squatting for leisure and sitting could make a significant impact on our metabolic and heart health.

The study, recently surfaced by The New York Times, was done based on the lifestyle of the hunter-gatherer tribes people in Tanzania.

Researchers asked 28 Hadza tribesmen and tribe women, ages 18 to 61, to wear activity trackers for about a week. The trackers, worn on the tribe people’s thighs, measured how much time they spent moving and still.

The study found that hunter-gatherers spent a significant amount of time lounging — in a squat position spending almost 20 percent of their inactive time with knees bent and bottoms off the ground.   On the other hand, individuals living in Westernized societies generally sit in chairs or recline which in turn reduces muscle activity, calories burned and energy expended.

When the tribespeople squatted, the trackers showed that their leg muscles were contracting far more than when they sat, and almost 40 percent as often as during walks.

The conclusion — Megan Thee Stallion is definitely on to something.  So squat and twerk it hotties!  It’s good for your health.