The Migos may not be together, but the members are still churning out music. 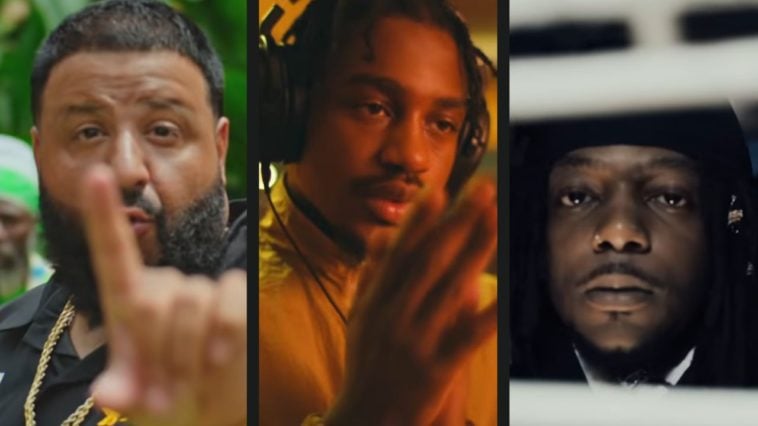 They each have been dropping some catchy jams with features by top artists.

In addition to the now-regular Offset– Moneybagg Yo offering, we have album releases by Dreamville’s JID, the gregarious DJ Khaled, and a mixtape by CMG’s 10 Percent.

These are the songs you take to the cooler months as the snow keeps you in as Fall turns to Winter.

Check out the songs that were released this week from Monday to Friday.

It appears this will be a constant feature.

Moneybagg Yo seems to be filling the void left by Quavo and Takeoff as Offset continues his rap journey.

You have to stan a multitasking king, though.

The rapper is releasing music while also gearing up for a legal battle with his record label Quality Control Records regarding his solo career.

JID is the new lyrical tsunami.

Nothing is stopping him. Not even NYPD, who recently shut down his album scavenger hunt.

His latest album, The Forever Story, is a 15-song masterpiece and an outstanding follow-up to The Never Story and DiCaprio 2.

As it appears to be a follow-up to his debut, the new album shows how much he has grown as a lyricist and the effect of the hallowed company he keeps in Dreamville.

With features from Lil Durk, EARTHGANG, 21 Savage, Lil Wayne, and more, this is a certified hit.

Looks like it has a RIAA cert in its future.

When Wiz Khalifa said “Everything I do, I do it big”, he really was talking about DJ Khaled.

The effervescent DJ really doesn’t move in small doses and this is obvious in his latest album.

GOD DID, Khaled’s 13th studio album, is him outdoing even himself. He went all out. He has proven that he is still capable of bringing on the cream of the crop to feature on his projects; GOD DID is a show off.

The features are a mix of the old – Jay-Z, Eminem, Lil Wayne, Kanye, Drake – and the new – City Girls, Quavo, Takeoff.

Near-death experiences have a way of giving fresh perspectives and an appreciation for wins, both big and small.

This is what underlies Lil Tjay’s latest song, “Beat the Odds.”

It marks his first song since he was shot and hospitalized.

“People wanna kill me, always keep my gun ’round

Pray I squeeze first, I can’t lose the millies I found”.

Directly referencing the incident that landed him in the hospital.

It is also an ode to those who remain true to who they are as they grow in wealth and fame.
Meanwhile, Lil Tjay recently thanked everyone for the well wishes and prayers.

Easy to bop to and catchy hooks are two things going for Quavo & Takeoff’s, ”Big Stunna.”

The duo, like Offset, are grinding on, keeping the Migos alive, ensuring they do not slide into oblivion.

At a level, it is for the pride at stake. The former group proved to the world that each member had their own juice when the Migos were three.

10 Percent – Broke Before You Heard This

The new signee to CMG, 10 Percent, also dropped his first mixtape this week.

The project, titled Broke Before You Heard This, is an 11-song offering with songs like “MTV Cribs,” “Zodiac,” fan favorite “Major Payne,” and more.

Jam to it and let us know what you think.

This is Nav at his self-aware best.

The delivery is not hard on the ear, nor are the thoughts he shares too jarring.

This is one of those songs where an artist lets you in and takes you into a different realm of thinking.