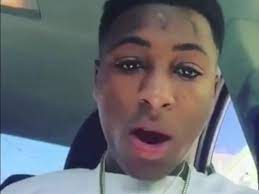 The Never Broke Again star has announced a global partnership with the one and only Motown on his Never Broke Again record label. He released a statement about the venture, and he’s making major boss moves with artists such as Quando Rondo, NoCap, P Yungin, Meechy Baby, Rjae, and Rojay signed to his label.

“I felt like I had a responsibility to my artists to make sure to find the right partner for my label. I’m looking forward to working with Ethiopia, Kenoe and Motown Records.” – NBA YoungBoy

“I’m excited to work with Never Broke Again, a homegrown brand that has created an incredibly authentic and credible movement that represents the next generation in Louisiana’s legacy of ground-breaking hip-hop labels. I look forward to working with YoungBoy and Montana to continue to grow their vision and reach their fans around the world.” – Ethiopia Habtemariam, Motown CEO

Southern rapper is staying busy behind bars, whether it’s making new deals or grinding audio fire. New footage has revealed what the jailed hip-hop star has been up to as he awaits trial.

The Never Broke Again star has been recording music in prison. A video of him turning up on a jail phone shows just how dedicated YB is to the grind.

NBA YoungBoy Rival Was Killed In 2017

In addition to making new audio fire, the Louisiana native has been dealing with his own legal problems — he’s currently in jail facing federal weapons charges — but he’s also indirectly linked to a murder case involving a rival artist.

Deandre Fields was charged with second-degree murder in the 2017 shooting death of local Baton Rouge rapper Gee Money back in May 2021. Fields is affiliated with NBA YoungBoy’s Never Broke Again crew, while Gee Money was part of the rival Top Boy Gorilla group. The two factions have been beefing for years. Fields pleaded not guilty on Thursday, and his next court date is set for this month.

Fields’ arrest warrant provided insight into what started the beef between Burton (Gee Money) and Gaulden (NBA YoungBoy), saying Burton released a song that contained “derogatory lyrics” about Gaulden’s sister. Gaulden responded with a social media post and the bad blood escalated from there, the warrant says. (The Advocate)

YoungBoy Calls A Fan From Jail

The “Bandit” hitmaker has been grateful for the support he’s received while locked up. YoungBoy reached out from behind bars to a fan who had recently written him, and her emotional reaction has the clip going viral.

“I was calling to thank you for writing me. I got your letter; it made me smile.”