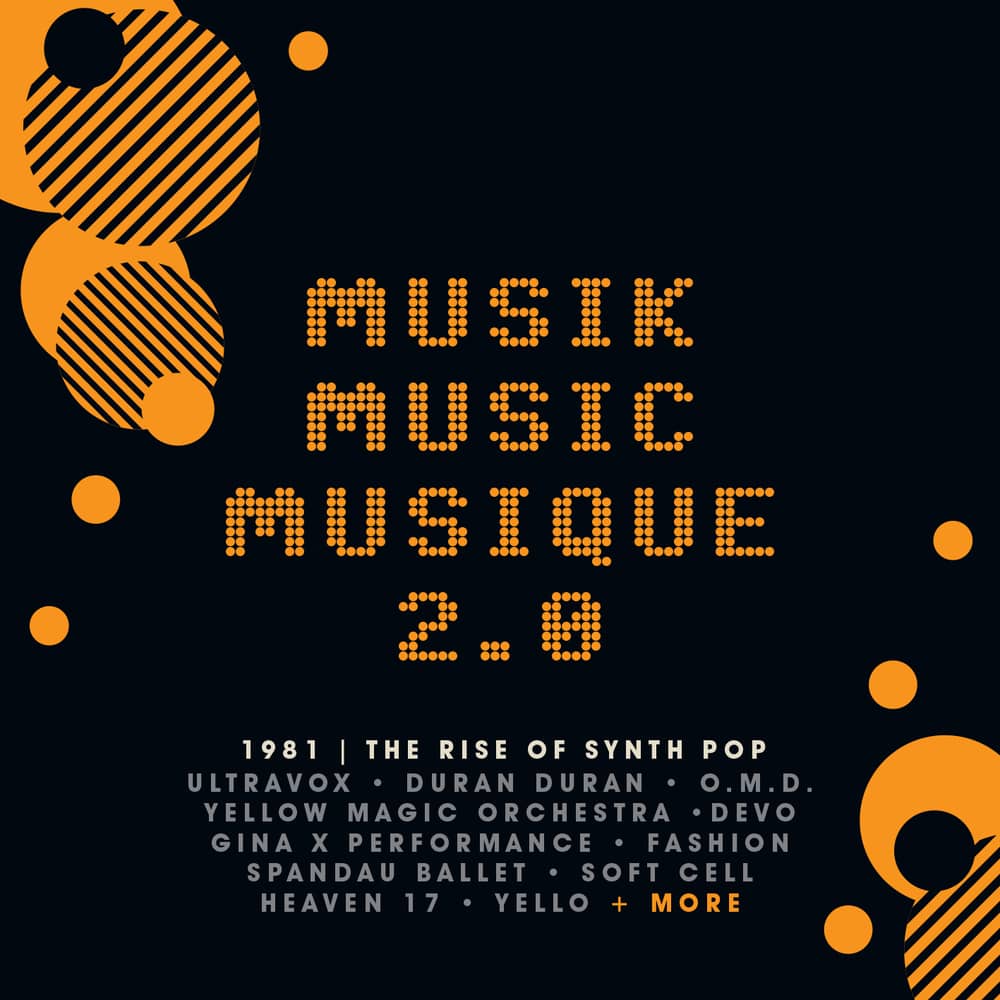 Following last year’s well received Musik Music Musique: 1980 – The Dawn Of Synth Pop, here we have volume 2.0, which keeps up the neat 40 year anniversary theme and looks at 1981; this time subtitled The Rise Of Synth Pop.

Immediately apparent is how fertile the synth pop landscape was at this point in time; the collection gathers together some (still) hugely popular artists alongside a plethora of under the radar gems, several otherwise unavailable on either physical copy or streaming services.

The compilation bursts into life with Heaven 17‘s classic ‘(We Don’t Need This) Fascist Groove Thang’, which is probably the most familiar inclusion on CD1 for the regular synth pop connoisseur, along with Orchestral Manoeuvres In The Dark‘s classy, yearning ‘Souvenir’ (still their joint-biggest hit) and the (maybe surprisingly included) Number 1 ‘Japanese Boy’ by Aneka. Elsewhere on the first disc we have Soft Cell’s ‘Frustration’, which showcases the short-lived (at least originally!), much-loved band’s grittier side (though it co-existed happily on an album with several huge hits), and a lesser heard early track from Duran Duran, the B-side, ‘Khanada’.

Devo, on the other hand, were four albums into their career by the time they offered up the cartoonish ‘Through Being Cool’, proving that they embraced the new technology available into their new wave / post punk outlook. Dramatis numbered three synth players in their four person line-up, and were originally the backing band for Gary Numan, who was somewhat surprisingly enjoying a brief period of retirement in 1981. The band soldiered on without him (though their sole UK Top 40 hit, ‘Love Needs No Disguise’  had a guest appearance from Numan) and their contribution, ‘Lady DJ’ sounds like a massive hit in the mould of Buggles or even Daft Punk a few years early.

Toyah’s hit ‘Thunder In The Mountains’ was her best single by some distance, its dramatic rush and gigantic chorus sounding excellent after all these years, while New Musik and A Flock Of Seagulls both contribute tracks that make a mockery of their modest Top 40 successes. If the former can afford to give B-side status to their excellent ‘Twelfth House’, then hearing that song might just have buyers of this set searching for further material from the band. Unfortunately there isn’t room to comment here on all of the tracks, but great sounds from The Passage, Virna Lindt and the brilliant one-off instrumental single by Analysis (‘Surface Tension’) have to be at least mentioned here. And we still have two discs to go!

Yellow Magic Orchestra were virtually veterans of the scene by 1981, releasing their fifth and sixth albums during the year. ‘Cue’ (or ’キュー’ to give it its Japanese name) sounds like Cut Copy two decades ahead of schedule and there are further CD2 appearances from major chart acts Japan, Visage, Kim Wilde and Tears For Fears (their debut single ‘Suffer The Children’ pairing bleak lyrics with an anthemic tune would be a trick they would often repeat with huge commercial success later on). Selecting Spandau Ballet’s virtual manifesto song ‘Reformation’ is a smart choice (the song gave its name to their CBS imprint) – it’s a great example of their earlier, spikier material that often gets overlooked these days.

Gina X Performance are represented by the excellent ‘No GDM’, later to be covered by Erasure. The track saw Gina Kikoine and Bernd Held (later to be superstar producer Zeus B. Held) score an underground hit with a gay anthem dedicated to Gina’s friend Quentin Crisp. It’s an undoubted highlight of the set. Drinking Electricity (don’t do it, kids) featured David Rome from CD1 stars Analysis and contribute the excellent ‘Random Particles’ which is as much about the guitar as the synth; Anne-Marie Heighway’s Nico-inspired (perhaps) vocals the perfect foil to the backing.

Hazel O’Connor appears with ‘(Cover Plus) We’re All Grown Up’, which hit the maddening chart position of No. 41 despite sounding like a Top 5 record, and Thomas Leer’s ‘West End’ is a prime example of his early(ish) work, a restless instrumental that gave no clue to the pristine pop he would later produce with Claudia Brücken (as Act).

CD3 kicks off with Chris & Cosey’s ‘This Is Me’, which is far more easy on the ear than you might expect from two ex-members of Throbbing Gristle and is followed by the mysterious Schleimer K with their atmospheric, stately ‘Nevermore’, which could perhaps be described as a cross between Bauhaus and Ultravox – the latter represented here by ‘I Remember (Death In The Afternoon)’ from their second Midge Ure-era album Rage In Eden as well as their (by then) former vocalist John Foxx with his stomping ‘You Were There’.

One of the best tracks on the whole collection is Blue Zoo’s debut single ‘Love Moves In Strange Ways’, a brilliant and commercial track that surprisingly didn’t trouble chart compilers. An appearance from Yello is always welcome, and their immense ‘Bostich’ (surprisingly another complete miss in the charts) sounds mighty and as ever, unlike anyone else on Earth.

Zeus B. Held crops up again in the unlikely guise of Zeus Cowboy with the naggingly insistent ‘On The Beach’ (he also released a single called ‘Musik, Music, Musique’) and B-Movie’s ‘Nowhere Girl’ is yet another of those songs so familiar to many synth pop fans that it’s hard to believe it never reached higher than No.67 in the UK charts.

The real skill in putting together these compilations is to pull together the familiar with the not-so-familiar and the not-at-all-familiar (to most people) into a cohesive blend that sounds great as an album in its own right. Musik Music Musique 2.0 achieves this with room to spare and is an absolute treasure trove for synth pop fans.