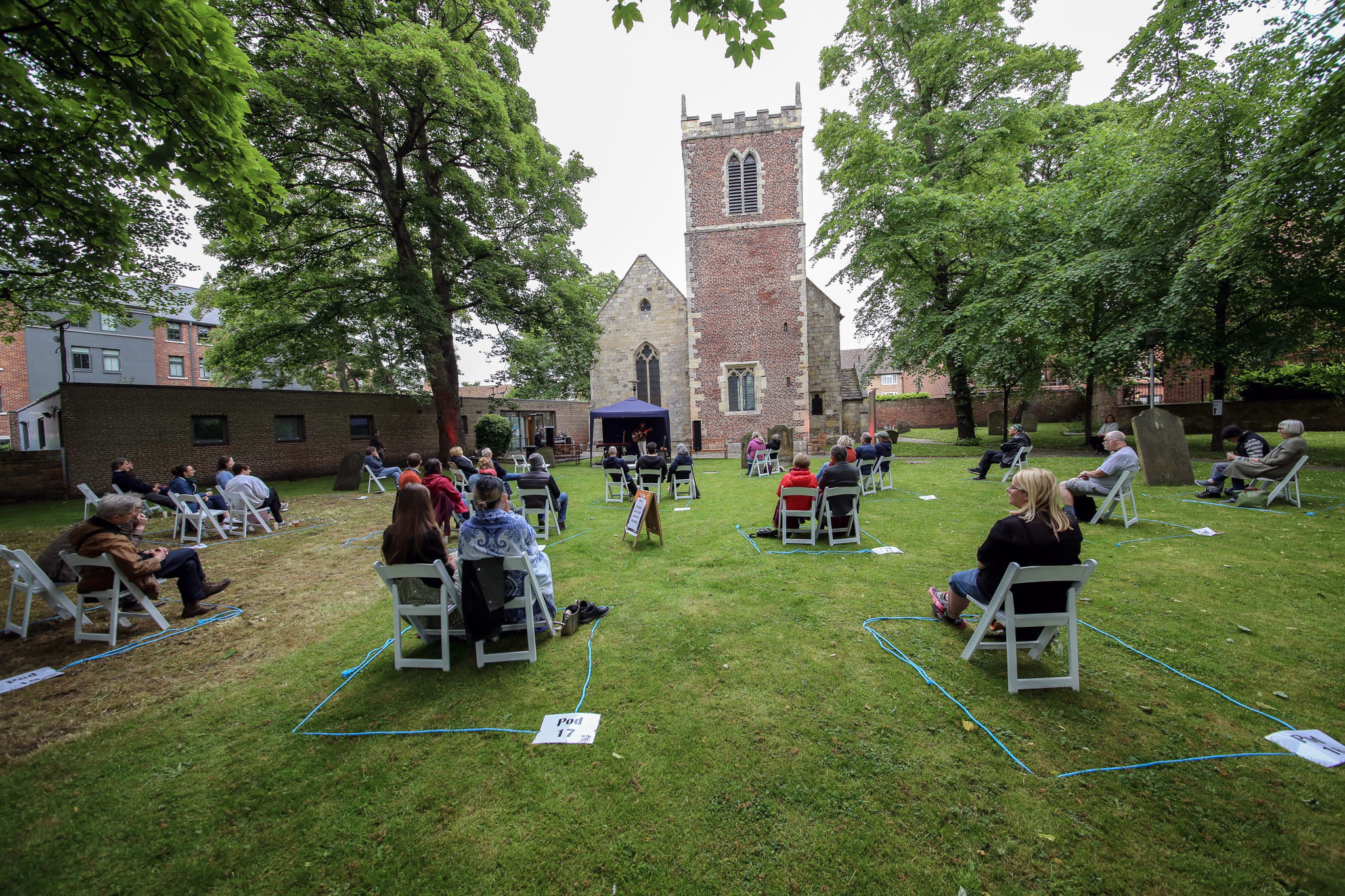 It was only an hour ago that the Prime Minister had announced the four-week delay to COVID lockdown easing. And whilst the news was not entirely unexpected it still came as a bitter blow to an already severely stricken live entertainment industry that warned it was unable to take much more strain. It, therefore, feels rather strange and not a little surreal to be now sat in the graveyard of a 12th-century church preparing to listen to some live music.

But here we are ready for what is the third instalment of the second edition of Songs Under Skies, an innovative series of open-air acoustic concerts brought to us by local music promoters the National Centre for Early Music, the Fulford Arms and the Crescent Community Venue and featuring some of the region’s finest musical talent. The so-called ‘Freedom Day’ may well have just been cancelled, but this all feels incredibly liberating. 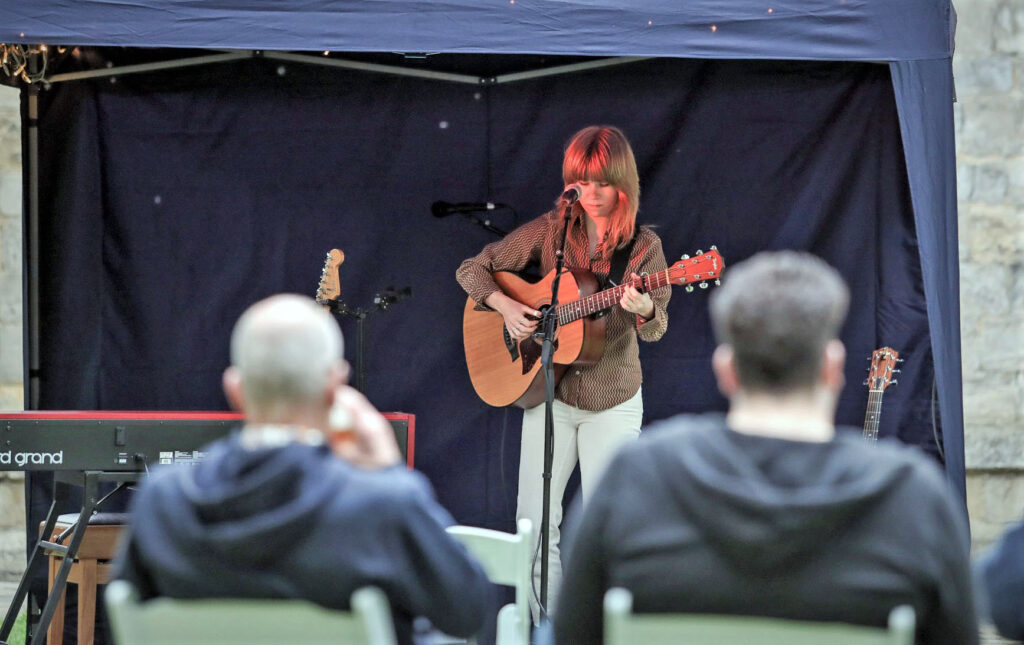 Katie Spencer is the first artist this evening to take to the little stage that is set up in the lee of the church itself. Originally from Hull in East Yorkshire, Spencer is a singer, songwriter and guitarist whose music is imbued in the dramatic landscapes of her home area. Her heart lies somewhere betwixt the crucible of the British folk revival of the late ‘60s and those early ‘70s singer-songwriters.  She too feels set free, released from the confines of live streaming – I last saw her on such an event supporting Michael Chapman from the Merchant Adventurer’s Hall in York late last year – and clearly delighted to be once more playing in front of people in a live setting.

Despite breaking a guitar string – expertly replaced with an absolute minimum of fuss – Katie Spencer still squeezes half a dozen songs into her half-hour set. They include the stunning instrumental ‘Helsa’ – where Spencer’s fluid fretwork recalls some of the more abstract moments on David Crosby’s 1971 kaleidoscopic masterpiece If Only I Could Remember My Name – and the title track from her 2019 debut album Weather Beaten, a song which captures the rugged texture and beauty of the natural world surrounding her.

Katie Spencer closes with a wonderful cover of ‘Small Hours’, embracing as she does much of the dreamy pastoralism found in John Martyn’s extraordinary original. Somewhat incongruously perhaps, hearing this song again takes me right back to my first experience of seeing John Martyn at Glasgow University in 1976 when his gig there that night descended into a massive barroom brawl and culminated in Martyn abruptly stopping his set, jumping off the stage and promptly decking two students. Thankfully, this evening takes place in much more serene surroundings and a suitably tranquil atmosphere. 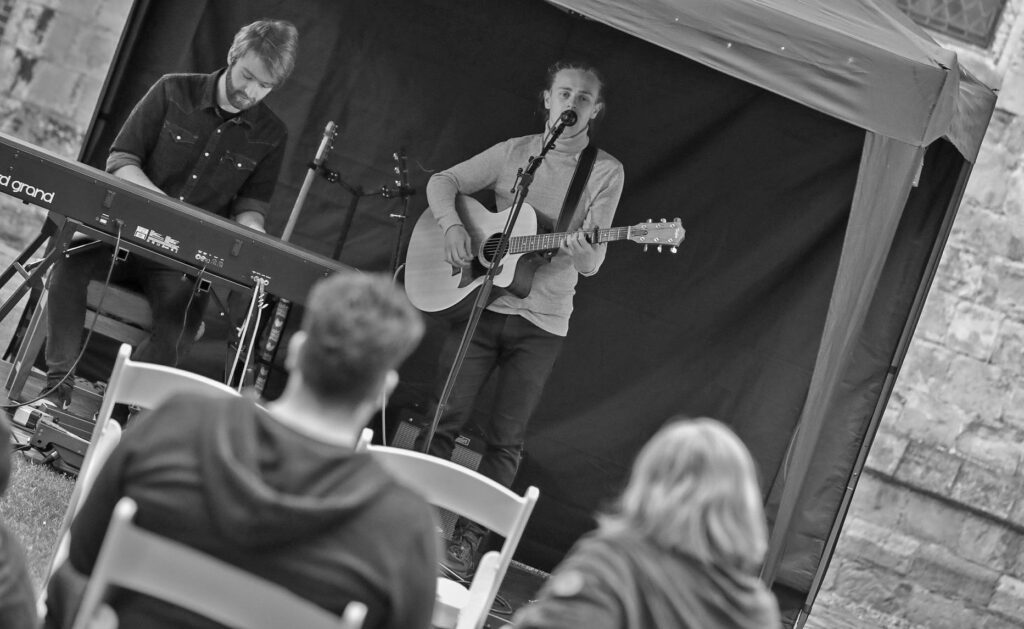 Josh Burnell is a young man who very easily adds to the overarching sense of wellbeing that is generated by these Songs Under Skies events. I first encountered the York-based musician at The Great British Folk Festival in December 2017 when his dynamic and highly entertaining set duly won him one of the event’s Introducing Stage competitions. His career has since gone from strength to strength including his winning of the ‘Rising Star’ Folking Award. Tonight, he appears accompanied by Oliver Whitehouse on keyboards and together the two men treat us to a handful of songs that embrace warmth, verve and a clearly infectious optimism. One of the many highlights is Burnell’s latest single, ‘Shelagh’s Song’, a most fitting tribute to the Scots’ folk singer, Shelagh McDonald, who mysteriously went missing for some 30 years.

Two more events remain in this Songs Under Skies series and a few tickets are still left for them:

More photos from this show can be found HERE