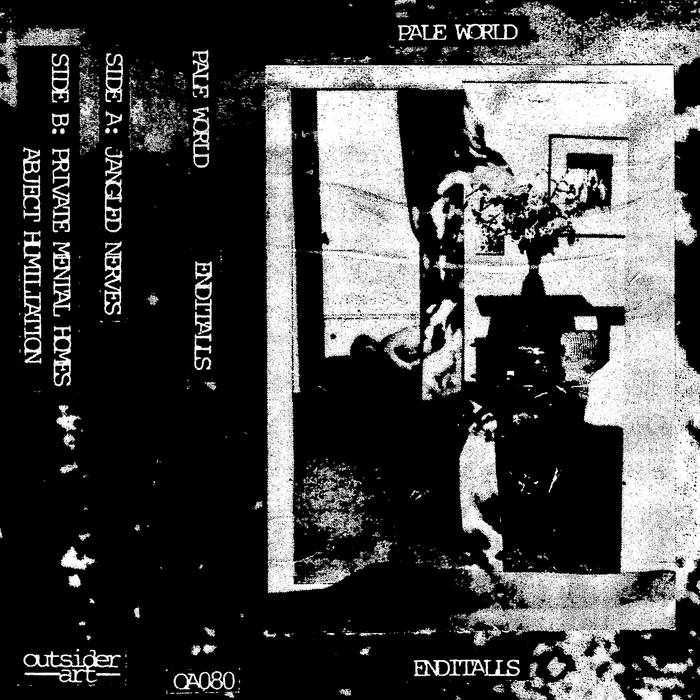 In January Pale World, AKA Joe Parkes, released a new album called Death Garage. It was 22-minutes of bleak harsh noise soundscapes. It really spoke to me and tapped into a lot of the feelings I was having about working remotely and the general growing isolation that we are all experiencing. At the time of release, it was Parkes’ strongest release. Since January there were rumours that there would be another Pale World release and that it was going to be special. These rumours didn’t ready me for Enditalls though.

The album opens with ‘JANGLED NERVES’ and the sound of the world on fire. This is the most abrasive track on Enditalls. Parkes has always incorporated harsh noise wall in his music. It always adds a nice texture to the melodies, but this is the first time, in a long time, that he’s just bombarded us from start to finish. Well, that isn’t entirely true. In the final two minutes he lets the curtain fall, and we are presented with an elegant drone. It gently meanders about, much like when a spring first starts to make it way after coming out of the ground. It’s tranquil and soothing. If Parkes had ended the song with either a fade out form the harsh noise, or an abrupt cut, it would have been great, but allowing the mood to drop for a few minutes was a masterstroke. It allows up to re-group before the next track. ‘PRIVATE MENTAL HOMES’ starts as ‘JANGLED NERVES’ ended. With a glorious drone.

At first the drone has the same soothing qualities as the previous track. However, as it starts to reach the halfway mark the drone has started to take on a more ominous tone. Dark vibes are forming just below the surface. At first you can’t really hear them, but you can feel them. Every once in a while, Parkes lets them come to the surface, poke their heads out, and then dive back below. This gives the song a sense of urgency that it might not have had. It also adds tension but making you think that at any given time it could all kick off. Four minutes from the end harsh noise motifs start to appear until they totally take over and everything is on fire again.

So now we come to the business end of the album. Parkes has left the best track until the end. ‘ABJECT HUMILATION’ is just over 16-minutes long but feels much less while listening to it. Unlike the last two tracks, it doesn’t open how the previous track ended. Instead, we have another wonderful drone. It has more bite to it than ‘PRIVATE MENTAL HOMES’, but not by much. At times it’s very serene. Then the mood slowly starts to change. Over time the harsh noise motifs start to become more and more pronounced, until everything coming out of the speakers is a white-hot seething mass. The way Parkes was able to make this happen, using delicate flourishes here and there is the standout moment of the album. Then, just as it started, all that power and aggression is over, and we’re left with an outro of sheer blissful music. It’s just a wonderful way to end the album.

What Parkes demonstrates on Enditalls is that he is more than capable of creating albums of similar sounds and tones. On ‘Disease is Love’ it was pretty much all the same droney vibe. ‘Death Garage’ had a harsh track and a more ethereal one, but here it’s so much more because of the way he’s combined the disciplines of music. I am slightly worried about Parkes’s well being. Track titles of ‘JANGLED NERVES’ and ‘ABJECT HUMILATION’ hint at something deeper, and darker, going on in his psyche. Let’s hope that this is his way of coping with the pressures of living in the modern world and that he’s alright in himself. Saying that, if this is the way Parkes uses those bleaker moments, then I’m all for it, as this is his most accomplished, and dare I say, enjoyable album to date.