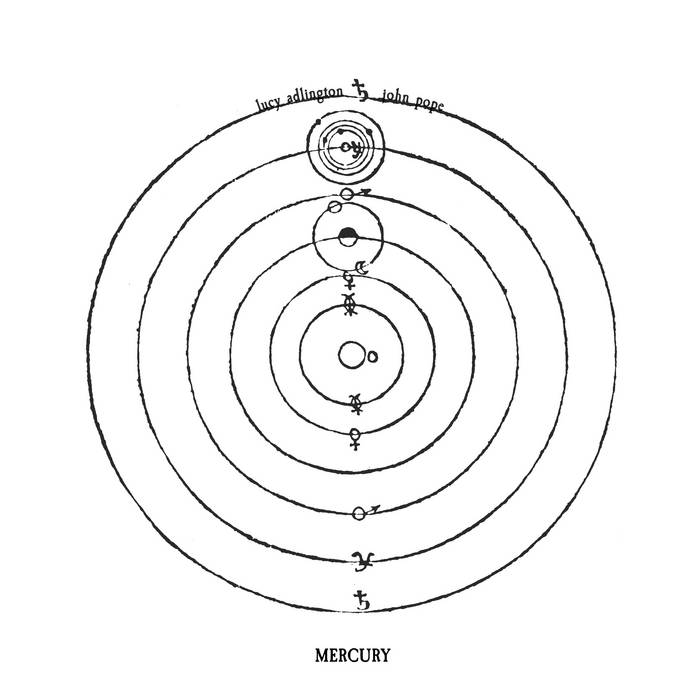 One of the best things in the world is finding a new album, but an artist you don’t know. As you listen you are not only finding out if you like the album, but the musician too. Everything sounds so vibrant that the rest of the world melts away. You are solely concentrated on what you are hearing. If you like it, you dive into the internet trying to find out if they have other releases. You inhale them greedily, like delicious food before you wolf it down. This afternoon I had one of these such experiences. I was digging online for something new to listen to and I found this album.

The album in question is Mercury and the artists are Lucy Adlington and John Pope. I’ve been an admirer of Pope for a while, but Adlington was unknown to me before today. As I was under halfway through it, I had downloaded everything I could find. Now I am sitting like a very smug child who found out where the Christmas presents were hidden and now is surrounded by a bounty.

From the start its easy to hear that Adlington and Pope mean business. The opening of ‘Part I’ is a series of bass bows and morse code sounding blips. As the electronic motifs become more and more pronounced, the bass sounds richer. All of a sudden Pope starts to play understated runs on his bass. This snaps us out of the abstract and reminds us that this is, well, music. The runs are playful but forceful. Then Adlington starts to combine her guitar with the bass and blips. There are sections of ‘Part I’ which feel like they’ve been lifted from a Twin Peaks score. Massive guitar chords are strummed. The chords are so gargantuan that they dwarf everything else in the mix. They sound so primal, and violent, they get the hairs on the back of your neck up.

‘Part II’ builds the tension slightly better than ‘Part I’. A third in there is a glorious section where it sounds like the double bass is being molested with its bow, under this there are bubbling sound effects that give everything a sense of movement, and urgency. It shouldn’t really work but it does. It should be a cacophonous jumble that envelopes you like a dense mist, but it doesn’t. There are pockets of space that allow you pick up other sounds buried in the mix.

Mercury is the kind of album that you can get lost in. There is so much going on that with every new listen you pinpoint something new. Was that bass run always there? Where did those electronic motifs from come? What is more remarkable about the album is, with the amount going on, just how sparse and light it is in places. Around the halfway mark of ‘Part I’ there is some heavy stuff going on, but we aren’t being bogged down by it. Instead, the guitar work feels slightly translucent. This is an album to enjoy, but it also works as a springboard into two rich back catalogues that will keep you coming back again and again. Now, if you’ll forgive me, Mercury is calling…