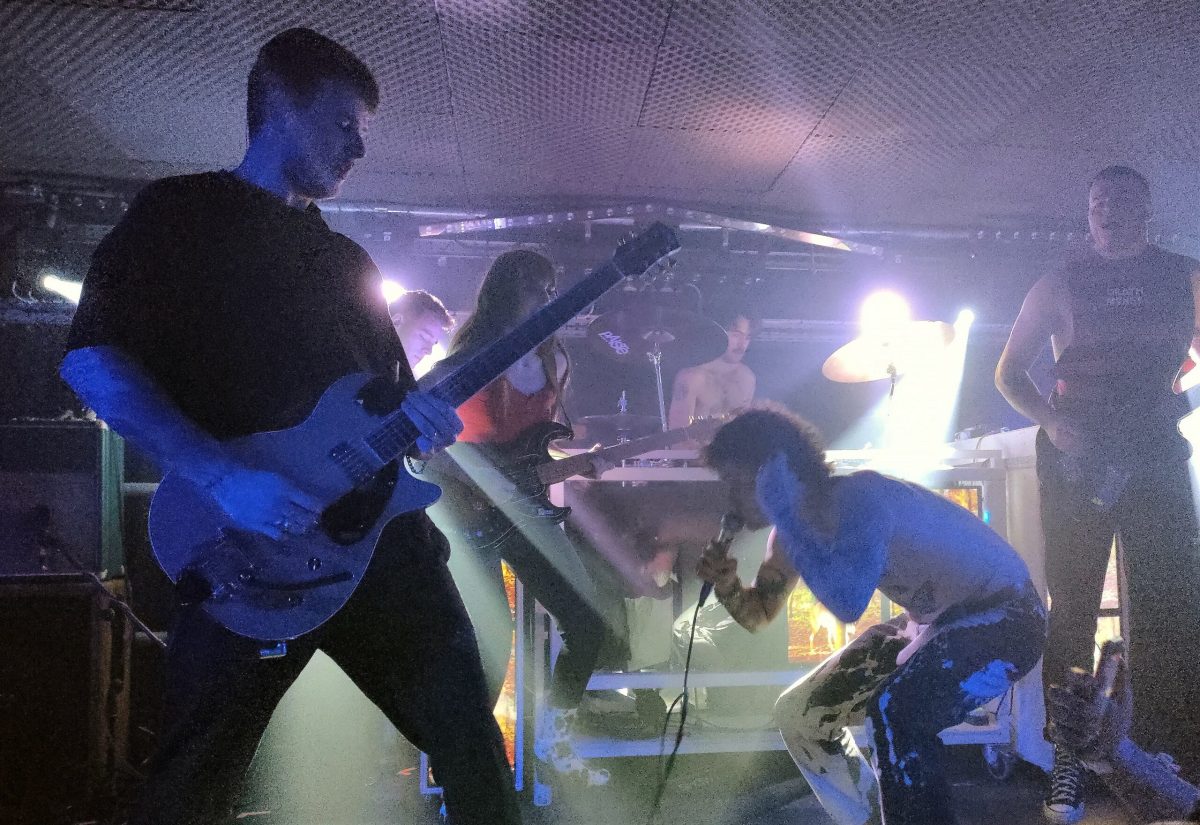 Bobby Bentham’s response to a request from the crowd to play early Strange Bones favourite ‘We The Rats‘ is…….unusual.  The message, though, is crystal clear.  This is not a band that rests on its laurels or plays it safe.  This is a band that is always striving for new horizons.

Strange Bones finally released their debut album, England Screams, in 2021 after six years of existence.  It is an intense slice of raw electro-punk, very much in the mould of The Prodigy.  Their journey in getting to this sound, though, was very different to that of Braintree’s finest. While The Prodigy started out as a pure dance band, developing a rock edge over time, Strange Bones approached it from the opposite angle, starting as a punk band and adding electronic influences.

The band have said that one of the reasons they waited so long to release an album was that they were searching for a sound that felt 100% right for them.  England Screams contained only one previously-released track, which was a pretty brave move for a band that had been releasing top-class material for six years.  Clearly, they had found what they had been looking for.

Speaking of brave moves, tonight’s co-headliner, Manchester’s Calva Louise, took some pretty bold ones with the release of their second album, Euphoric, also in 2021.  Their debut, 2019’s Rhinocerous, was a collection of insanely-catchy indie-rock anthems that you couldn’t help but sing along to.  Anyone who expected them to follow this formula on Euphoric, though, was in for a surprise, as it is a much harder-edged effort – and much of it is in Spanish.

Tonight’s set, though, only serves to confirm what a good record Euphoric is.  Certainly, it gets an enthusiastic crowd up and dancing early doors. Why does music all need to be in English?  Music is a very expressive thing anyway, especially when you have a chirpy, upbeat personality like Calva Louise’s Jess Allanic, and fabulous guitar skills too, by the way.  Hugely enjoyable set from them.

You wouldn’t exactly describe Bobby Bentham as ‘chirpy’, but boy, the guy has some energy.

From the moment he comes on the stage for ‘Here Come The Wolves’, he’s in the crowd, making sure everyone is engaged.  By the end of the set, there can’t be a soul in the crowd who hasn’t had Bentham’s hand on their head, his mic by their mouth, or his bum in their face (in a good way).  He’s like the world’s most hyperactive waiter, making sure everyone in the restaurant has their glasses topped up, just in case they have run out since he last saw them two minutes ago.

Tonight’s set is a mix of some of the band’s later pre-album singles with songs off England Screams, and it’s absolutely breathtaking.  Some might say that 45 minutes is too short for a headline set, but when it’s played at this intensity, it’s plenty.  Making it any longer would take away from that intensity, and that would be a tragedy.

The beauty of the band’s current sound is that it you can mosh to it like a punk, or groove to it like a drum and bass addict.  ‘Snakepit’ just cries out for a good pogo, and the crowd duly obliges.  On occasion, Bobby goes into into the crowd and runs around in a circle like a tattooed Moses, creating his own circle pit. There is no let-up.

Then they close with a bruising, guitar-heavy cover of The Prodigy’s ‘Breathe’. It just doesn’t get any better.

The crowd is brilliant tonight too.  Really good atmosphere, and probably the highest proportion of females at a punk rock show that this author has seen in years, which is just brilliant to see.  Bobby himself expresses surprise at the size of tonight’s audience, given that the band has never drawn particularly well in Bristol in the past.

Clearly, Bristol has caught on to what those in the know have seen for years; Strange Bones are one of the most exciting bands around.