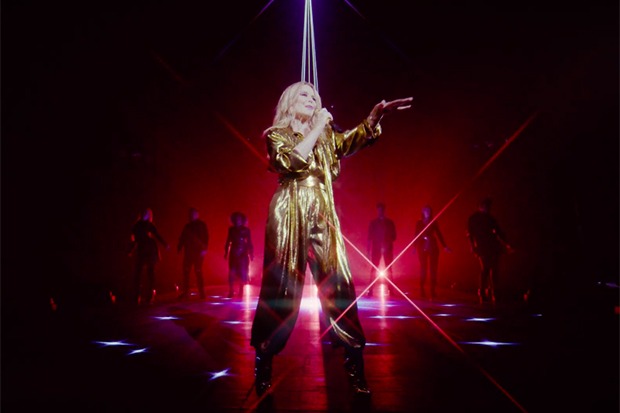 As the old saying goes, necessity is the mother of invention. When the touring industry ground to a halt due to the outbreak of COVID-19, artists and labels scrambled to come up with an alternative. After a few embarrassing “Zoom Hangs,” someone came up with the idea of a virtual concert. Fans could pay a reduced amount to watch a pre-recorded show from the comfort of their own home. So far, the results have been mixed. It all just feels a little stale and lifeless without the energy of a live audience. Kylie Minogue, however, has cracked the code.

The pop icon’s INFINITE DISCO was broadcast tonight (November 7) and it proved to be a glittering, hit-filled party from beginning to end. The fact that Kylie gave us one, long continuous performance — no painful audience interaction, unnecessary costume changes or segmentation — lent the concert a unique sense of intimacy. The hitmaker invited us into her glittery, disco-fabulous world and then gave us a guided tour. Unity or, more specifically, the way the dance floor fosters it, was the theme of the event and, if only for an hour, life felt normal again.

Always one to make an entrance, Kylie kicked off INFINITE DISCO cloaked in black. She began with a brief medley of “Magic” and “Come Into My World,” before whipping off the druid-drag and belting out “I Love It.” The flawless 52-year-old then pranced towards the dance-floor and serenaded us with “In Your Eyes.” That was a treat for Fever-era fans (i.e. Americans), but the next song was a blessing for the faithful. Ms. Minogue dusted off “Light Years” from her similarly-titled 2000 LP. The fact that it transitioned seamlessly into DISCO highlight “Supernova” was an act of pure alchemy.

After an intentionally stark beginning, the production slowly became more elaborate with the arrival of dancers, gusts of smoke, laser lights and a neon-trimmed stage. Kylie teasing us with a line from “I Should Be So Lucky,” before slipping into “Dance Floor Darling” stood out as an early highlight. If that sequin-filled sequence didn’t put a smile on your face, you might need to consult a doctor. After raising our serotonin, the living legend then took us to church with absolutely stunning, choir-assisted renditions of “All The lovers” and “Say Something.”

Australia’s greatest pop export then dusted off a little choreography for the delightful “Real Groove,” before delivering my favorite moment of the night — a sexy, languid disco remix of “Slow,” which Kylie mashed with Donna Summer’s “Love To Love You Baby.” That set the bar ridiculously high, but “Monday Blues” and “Where Does The DJ Go?” emphasized that DISCO has hits for days. There was a time when I would have argued for a moratorium on the diva performing “Love At First Sight” live, but it fit the show’s euphoric tone and the staging was lovely.

For the grand finale, Kylie delivered a sassy rendition of “Last Chance” with glittery confetti falling down around her. That teamed with the disco-fabulous costumes, lighting and glamorous lighting evoked a Baccara TV performance circa 1977, which is high praise indeed. Last but definitely not least was “Magic,” a song that deserves so much more than being a footnote in Kylie’s discography. Watch a couple of standout performances from the divine INFINITE DISCO below.