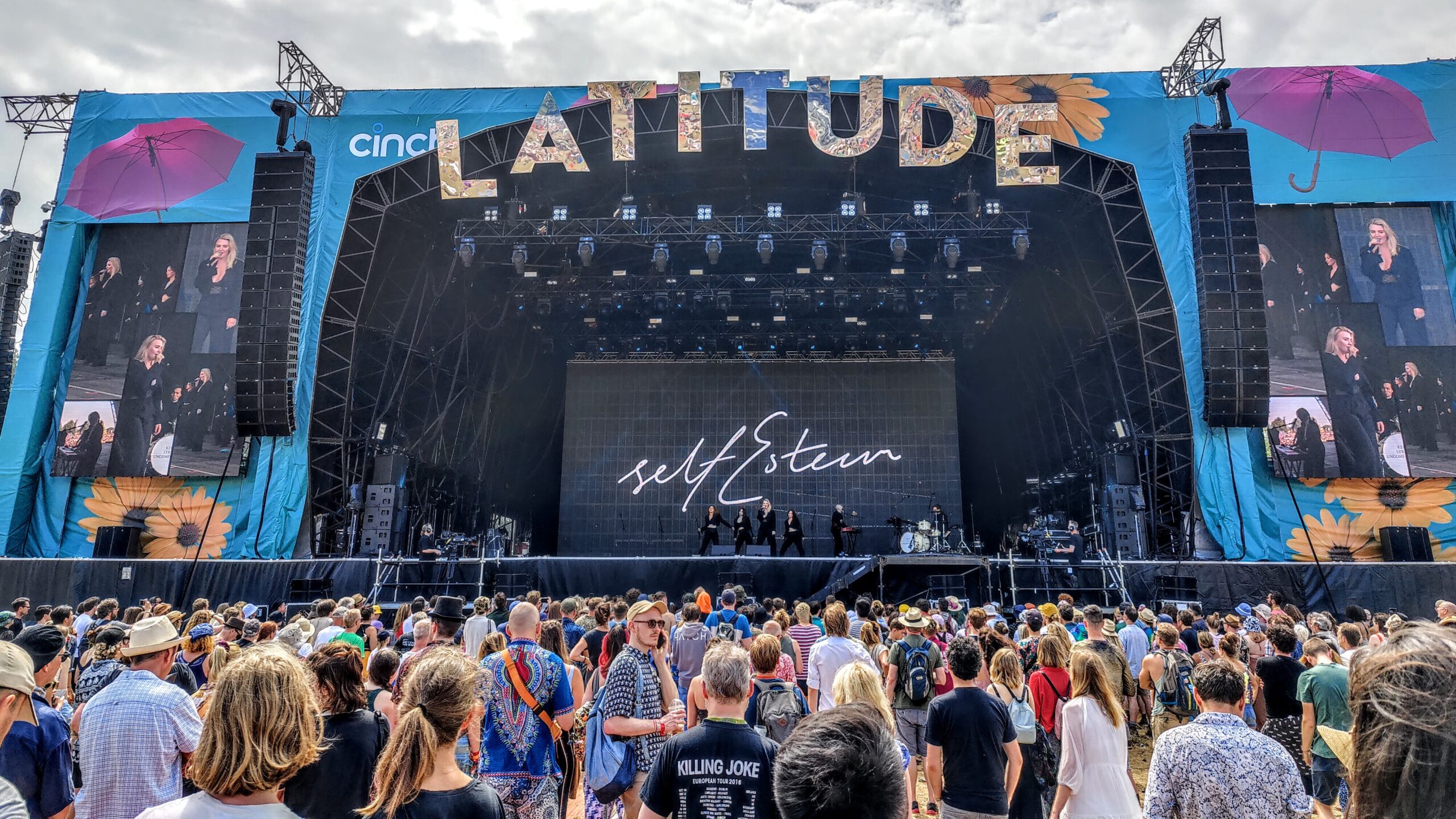 To slightly paraphrase Pulp; “Is this the way they say the future’s meant to feel? Or just forty thousand people standing in a field?” It certainly feels futuristic to have a capacity festival happening in 2021, but all the kudos in the world to Melvin Benn and his Latitude team for getting the Henham Park festival up and running.

If you haven’t seen any of the mass media coverage, and aren’t familiar with the concept of Latitude, it’s a mix of music, comedy, literature, performance, and any other type of culture that you can think of. Obviously, music is the major theme but the likes of Katherine Ryan, Jo Brand, Bill Bailey, Joel Dommett, and others bring the glamour of the UK’s comedy scene to the festival. Sprinkle the likes of Adam Buxton, Mark Kermode, Jess Phillips, and endless more names across the non-music stages and you get a feel for where it’s pitched.

The sense of wonderment at seeing so many people all in one place is keenly felt. The Thursday night sees a sizable crowd for some traditional Spanish music, which just so happens to be the first live music this writer has seen since March 2020. A tear may have been wiped away. The first official music of the weekend was the idiosyncratic Lynks on the main stage (aka Obelisk Arena) with a brand of energetic electro-indie-pop that’s perfect to lift a crowd not yet adjusted to this old world; the lyrical themes maybe not quite so suited to the child heavy arena audience. Lynks was lucky, an attempt to see up and coming pop singer Gabby Rivers was thwarted by a huge crowd in the relatively small The Alcove stage. A similarly sized crowd also kiboshed seeing the Supergrass special of Adam Buxton’s Bug in The Ballroom with a queue that got completely meshed with the pizza van queue. Comedian Glenn Moore rat-a-tat-tat delivery spiced up the afternoon though, ahead of a work-in-progress show from a surprisingly unassuming Simon Amstell.

The Obelisk Arena and its crowd of camping chairs, blankets, and parents were where the main, predominantly pop-flavoured, action was at. A run of Maisie Peters (all personal lyrics, dressed in presentable Radio 1 pop melodies), beabadoobie (indie-pop with a tinge of 90s Britpop) and then proper popstar Mabel with her self pronounced set of “banger after banger” rounded off the starter menu. The main act of the night were the UK’s premier rock band, Wolf Alice. They have the perfect blend of songs to headline festivals now, with the nuance of their recent Blue Weekend album adding to the raw energy of their earlier efforts. Kicking off with the punk-rock ‘Smile’, dropping in favourites like ‘Don’t Delete The Kisses’ and ‘Moaning Lisa Smile’ while delivering the beautiful ballad ‘Safe From Heartbreak (If You Never Fall In Love)’, the song of their lives in ‘Lipstick On The Glass’, it’s an expertly judged set. At a time when there has been a lot of moaning about the lack of new headline bands coming through leading to a recycled line-up in recent years, Wolf Alice have definitely stamped their claim.

Supergrass booted Saturday into life with a hits heavy set showing why they’re still one of the underrated Britpop bands of the ’90s, with perfection like ‘Moving’, ‘Late In The Day’, and the completely apt ‘Alright’ they always deliver. With an afternoon of mainly indie bands and an evening of dance thanks to Rudimental and The Chemical Brothers it was away from the Obelisk Arena that Saturday’s delights were found. Brand newcomer Holly Humberstone was performing one of her first live shows and certainly, her biggest on the BBC Sounds Stage, she delivered a winning performance of genuinely likeable between-song banter and deeply real lyrics. Villagers are a band who regularly get forgotten about, but each time they play a festival are one of the absolute highlights. Having moved from their earlier folk leanings onto something more varied, they’ve kept themselves interesting and Conor O’Brien is an endlessly lovely leader. Over in the woods at the Sunrise Arena Orla Gartland lit up the mid-afternoon lull with some beautiful vocals and excellent melodies, while late in the night Black Honey offered a raucous rock alternative to the electronics on the main stage, including creating a safe space for women in the moshpit area of the stage.

Sunday saw comedy legend Bill Bailey open the Obelisk Arena, and his brand of musical comedy drew one of the largest crowds of the weekend. It’s all very clever stuff, being mildly political and ripping the piss out of some sacrosanct rock classics from Led Zeppelin and ACDC among others. The highlight is his final skit involving some horns and one of the most famous rock intros of all. The rest of Sunday is pop all the way, a last-minute replacement for Billie Marten is Self Esteem who delivers one of the performances of the weekend, mixing dry humour, “keeping lyrics uncomfortable”, banging songs, and dance routines not suited for the heat, the former Slow Club-ber shows she’s made the right career choice moving to thoughtful but populist pop. Newcomer Griff wows the Obelisk Arena crowd with her winning smile and excellent modern pop, her biggest hit, ‘Black Hole’, is a spot-on way to end her set. 80s survivor Rick Astley uses every ounce of his experience to deliver a crowd-pleasing 45 minutes, from his own soulful ‘Cry For Help’, through a cover of ‘Giant’ which gets the crowd bouncing, to long-awaited closer ‘Never Gonna Give You Up’, it’s sprinkled with cheese, light swearing, and good times. A chuckle at Reginald D Hunter is followed by another set to lift spirits and get lungs full of song from Kaiser Chiefs. If, from a distance, their songs all sound similar, up close ‘Ruby’, ‘I Predict A Riot’, and ‘Oh My God’ are all pop-rockers of the highest order.

Overall Latitude 2021 showcased the huge array of talent that the UK has in its cultural heart. From top of the range comedy to thoughtful discussions on addiction, dissection of movies, live podcasts, chats about the state of men’s mental health, and onwards through some of the best music the world has to offer in the likes of Wolf Alice. Despite the last couple of years, and the lack of real support from the UK government, the UK’s culture scene continues to thrive and fight on. The newest artists like Maisie Peters, Griff and Holly Humberstone released music in lockdowns and are playing their first shows, while Rudimental, Rick Astley, and Supergrass are all getting back to what they love most: playing live to the people.