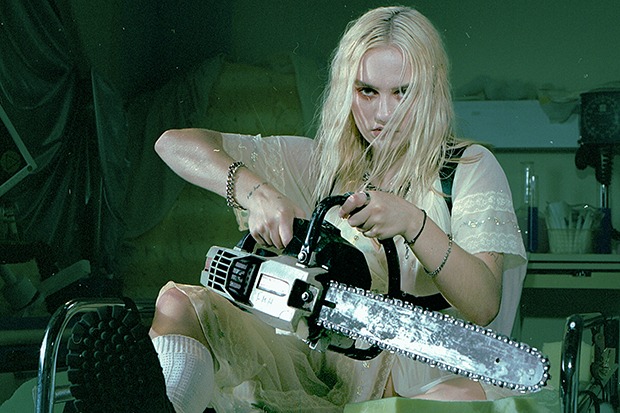 2019’s Junk EP established Carlie Hanson as One To Watch. Her just-released DestroyDestroyDestroyDestroy project now cements her status as one of pop’s most original and authentic voices. At a time when nostalgia is king and disco beats are back on the radio, the 20-year-old heads in the opposite direction. Her sophomore EP is grungy, gritty and often pitch-black. Particularly when she’s singing about topics like drug addiction (“Stealing All My Friends”) and mental health (“Good Enough”).

I recently spoke with Carlie about the shift in direction between Junk and DestroyDestroyDestroyDestroy (it was the unintended result of not being in a great place) and the impact of 2020 on her music. She also opened up about the attention-grabbing title, promoting a project in the nightmare-scape that is modern-day America and the status of her long-awaited debut album. Other topics of conversation included small-town life and that controversial “Ego” lyric. Catch up with Carlie in our Q&A below.

Congratulations on the EP. I love it!

Thank you very much. What’s your favorite right now?

Probably “Good Enough” because it captures the mood I’ve been in for most of 2020. This EP sounds very different to Junk. It’s a bit darker and grittier. Was that intentional?

It was a natural thing. I never really like to think too hard about what I’m creating. I’ll literally just go into a session, and how I feel that day is how it comes out. Everything about the project is dark, even the title. A lot of the lyrics are grim, but they are also empowering. Everything came together naturally. Also, what I’m listening to at the time definitely has an influence on what I make.

How did you come up with the title?

I listen to the project in full and try to figure out what the common theme is. I just write down words that come to mind. The major theme seemed to be self-destructiveness or destruction. Destroying myself, destroying relationships, destroying habits and destroying labels. At first, I was going to call it Destroy Everything, but that just didn’t sit right. Then I watched a show, I forget the name of it [it was HBO’s I May Destroy You], and the first episode was called Eyes Eyes Eyes Eyes. I was like, “Wait. That’s really cool. What if I just make the project DestroyDestroyDestroyDestroy?”

I love it. Destruction certainly seems to be the theme of “Fires.”

The funny thing about “Fires” is that it got sent to me. I never take outside songs. I’m very adamant that I write on everything, but a friend sent me the song and he was like, “Can you listen to this?” It just really resonated with me and I made it my own. I have this weird thing that… when things are going really well, I just know something bad is going to happen because that’s just life. I want to just fuck it up myself before it gets there. I have a tendency to do that and that’s what this song is all about.

“Is That A Thing?” is another one of my favorites. It’s your rock moment.

Hell, yes. “Is That A thing? was one of the first songs I wrote for the project. I was in a very much rock mode. It was such a mess of a session because we were trying to figure out what the fuck is happening in this song, but it all came together and it worked out. The song started out being about me talking to my drug dealer. That’s what the pre-chorus is about. Then, it becomes about my experience in high school. A lot of people just tearing me down. “You’re a stoner, you’re a loner, your clothes suck,” shit like that. It’s a huge fuck-you to them.

Yeah, fuck those people. Do you think the EP’s darker tone has anything to do with the hellscape of 2020?

It’s a mood. I know it was written before lockdown, but “Ego” feels so timely.

I wrote that right at the beginning of 2020 when everything was fine, when we thought this is going to be the best year of our lives. [Laughs]. I just wanted to write a song that was empowering. Then we got to that line in the chorus — “fuck COP.” That line literally came from talking about my hometown. I’m from a very small town where I was doing drugs and normal teenage shit. I just learned, “If we get pulled over, you don’t trust the cops.” Anytime we drive past the cops, we would be like, “Fuck the cops.” That’s where the line came from initially.

Then, Black Lives Matter happened and police brutality became a huge issue as it should. I would definitely say that this song needed to come out during this time. It’s really funny. it’s weird that that happened, but I liked that it’s connected to the time we’re in now and not just some dumb comment I said with my friends. It’s more than that.

You also got Iann Dior on the song, who now has the number one song in the country.

That is wild. I didn’t even think I was going to get a feature on “Ego.” I had a second verse there and it was really cool, but I mentioned to somebody on my team that I really liked Iann Dior’s album. So I sent his team a few of my songs, and he picked “Ego.” It happened really naturally.

For me, the hardest-hitting song on the EP is “Stealing All My Friends.” How personal is that song to you?

It’s 100 percent very personal to me. It’s not even having family members that passed away from drugs, I also have friends who have gone down — or are still going down it — the spiral of all they want to do is drugs. They forget who their friends are and they forget everything that means something to them. The song isn’t only about death. It’s also about when people get addicted and lose touch with reality. I’ve had many friends go through something like that. I myself have gone through a very, very hard time of being addicted to Xanax.

That was a very fucked up time in my life. Almost all of my mom’s siblings have passed away from drug abuse. It’s very real to me. When I was writing it, I didn’t want to sugar coat anything. I really wanted to take my time with every lyric and really just try to get the listener to understand everything that I wanted to say because I felt it. That was a very personal one. I think some of my favorite lyrics I’ve ever written is in that song.

We mentioned it earlier, but “Good Enough” is another intensely relatable song.

That was written in 2019. I was living in a studio apartment by myself, and that was a really weird for me because I was 18. I did not know how to deal with it. I love being by myself, but it just got to be too much at a certain point. It’s like what I’ve gone through again in quarantine. I didn’t want to get up some days. I was shutting my curtains. I didn’t care to go outside. It was just a really dark moment for me. I guess I truly miss my family and my friends. It takes a while getting used to the LA life. I don’t think I’ll ever really get used to it.

You’re right about LA. This is a strange place at the best of times, but it’s even stranger in 2020 because everything good about it is shut down and you have way too much time to think. That’s been my experience.

Yes, 100 percent. It’s a love-hate relationship for sure. I think I want to get out of LA, maybe take a trip to Nashville. The environment you’re in definitely affects the kind of music you’re making. I want to experiment with that a bit.

There are some semi-upbeat songs on the EP. Like “Side Effects” and “Daze Inn” is a vibe. Is that important to you to mix it up with those happier songs?

It just wasn’t something I was really thinking about. I wasn’t like, “Okay, I have these dark, moody songs, so I have to balance it out with happy songs.” If every song was going to turn out moody and dark, that’s what it was going to be. It just so happened that I had some good days. Well, “Side Effects” is actually pretty fucked-up lyrically. I’m glad that it did happen though because it does balance out the EP. I think with songs like “Stealing All My Friends” and “Good Enough,” there needs to be some breather moments.

Have you thought about making a full album?

Yes. I want to just get out of LA, go write with people I haven’t written with before, and just try to hone in on what the hell this first album is going to be. That’s definitely the next step for me. I’m ready. I just want to invest all my time in that now and make something really, really great.

How far along are you? Have you been writing songs?

I’ve been learning how to produce on my own. They’re not good at all, but I have some songs that I’ve just been trying to make by myself. I haven’t done many sessions because I was wrapping up Destroy and also learning how to produce. I haven’t been making too much other music right now, but I do have loads of music from two years ago, a year ago that I think I need to go through and revisit.

2020 has made promotion really hard. How are you going to make sure that everyone hears the EP?

I’ve been doing virtual performances on YouTube, Twitch and Instagram. I really would love to do a small virtual tour if possible. I’ve seen a lot of people have been doing that, and I think that could be really cool. That’s pretty much all we can really do right now. I would love to set up a small fan meet-up, but it would have to be done safely. I really miss human interaction. It’s so much more real when fans get to tell you in person what the music means to them. I really do miss that. The virtual shit is where I got to go for now.

What have you been listening to in 2020 to take the edge off?

I hopped on the Clairo train. I really just throw on her album and fucking vibe. Then, a lot of Lil Peep. That’s not taking the edge off at all. I just like screaming my heart out when I need to. Who else? A lot of rap that I find on TikTok. I listen to a lot of Nirvana, The Neighbourhood, Yungblud, I’m really excited for his album. Dominic Fike. I had a fangirl moment when his album came out. That was a cool experience. 070 Shake, her whole album. I’m not even kidding you, I’ve never listened to an album more.

Congratulations again on the EP again. Good luck with it.

Thank you so much!