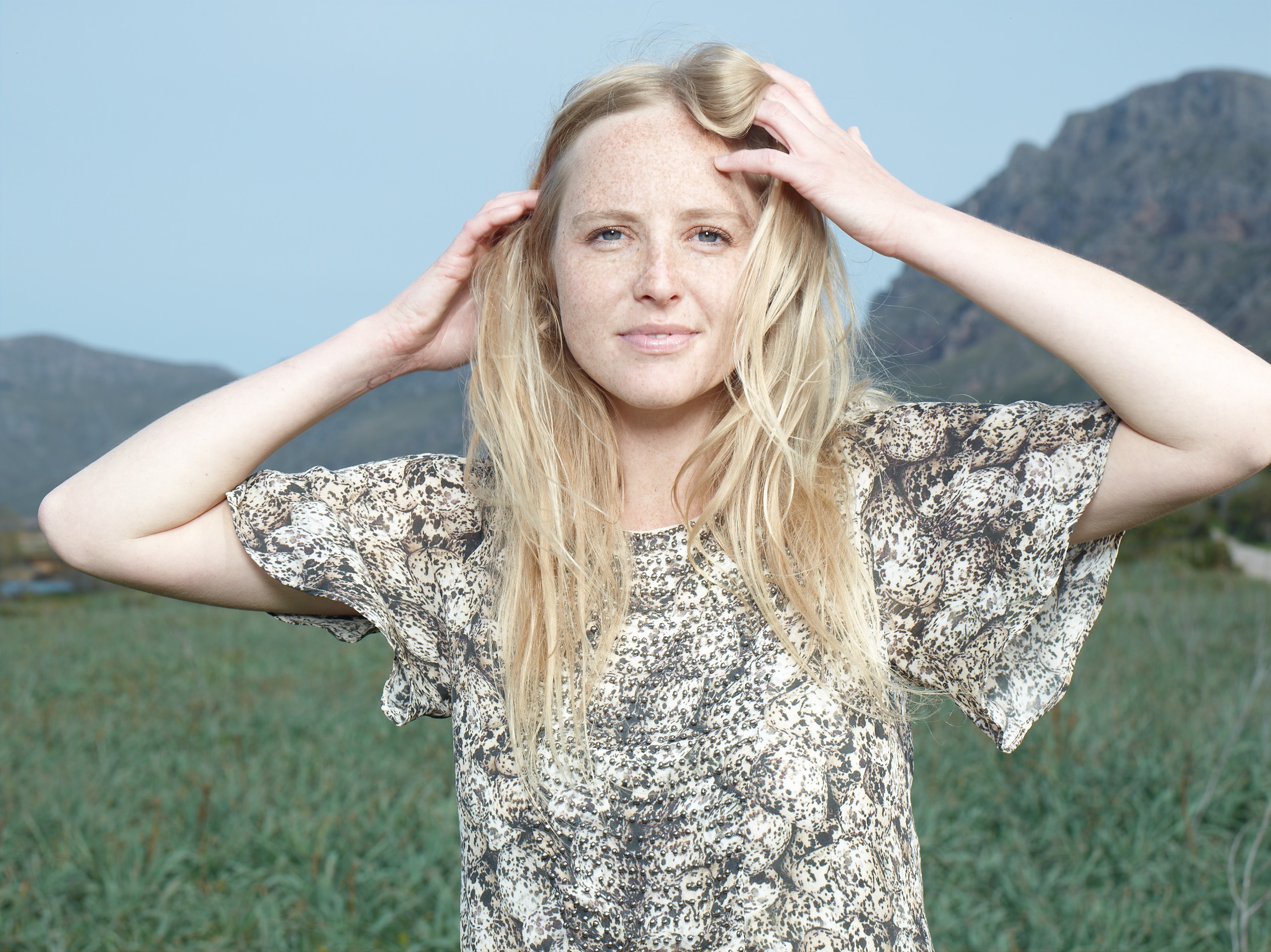 Making the most of some pandemic related spare time, Lissie Maurus is belatedly celebrating the tenth anniversary of her 2010 debut Catching A Tiger. Not only did she release the expected remastered and extended version of the album, she also had Watch Over Me (Early Works 2002-2009) up her sleeve. A collection of unreleased songs in various stages of unfinishedness, the album is a fascinating view into the nascent songwriting and singing of the Illinois rocker. We caught up with Lissie at her parent’s house (“My nieces are here, there’s two dogs upstairs wrestling, so it’s like really, really crazy, but I’m hiding downstairs”)  to chat about Catching A Tiger and how she found those early recordings.

How is it? Is it strange talking about Catching A Tiger now it’s 10 years or 11 years old?

It’s great. You know, I’m chatty, I talk too much. I have no problems talking and talking and talking, so, no, it’s not strange. It has reminded me, like, wow, that I have so much gratitude for Catching A Tiger. It gave me a career and I had the time of my life,  running around London. And the UK became a second home. That 2010 summer was just this glorious, happy sunny summer. The World Cup was going on and I’d had a blast at Glastonbury, it didn’t rain and everyone was just like high vibrations. It was just an excellent, excellent summer. So it brings back a lot of really good memories, not only for me, but for people who maybe ‘When I’m Alone’ was the soundtrack to their summer. It means more than just the song means, you know, it’s a time and a place as well.

That must be one of the most unique things you’ve done, go to Glastonbury when it’s not raining. That’s it doesn’t happen very often.

Absolutely! And that was like that in Norway as well. The weather’s always a little unpredictable there and we went over there and played a festival. It was raining and my bandmates and I stepped out on stage we just had the most glorious moment. We started playing ‘Everywhere I Go’ and legit, the clouds parted and the sun came out and everyone in the audience started like cheering because the sun had come out and it was almost like we got credit for it, even though I know that’s ridiculous. And that just really solidified this beautiful moment in this relationship with sunshine. It was just a summer of sunshine. It was awesome.

Did it surprise you back then that the album did so well in Europe?

For sure. And you know, I, wasn’t on a major label in the US at the time, only in Europe, so that had something to do with it. It didn’t totally surprise me because I had seen Americans romanticize British people, but I feel like British people kind of romanticize Americans. So I think there was some of that going on, California cool or something we were presented as that represented something sort of good about America.

It’s the music itself though as well. There’s all that stuff around it, the marketing etc, but it’s almost a perfect blend of credible sort of folk-rock and pop sensibilities. And really accessible.

Catching A Tiger definitely had that sort of roll your windows down, we’re going cruising, let’s hit the open road, you know. It really had that feeling and I think that really resonated with people. And I’m just like so grateful for it.

Looking back now are there any tracks that really stand out for you now that maybe didn’t 10 years ago?

‘Everywhere I Go‘, I mean, that sounds like it has never gotten old. I still get emotional when I sing that song. And it almost didn’t make it on the record. It wasn’t recorded in the house where the rest of the record was recorded. I actually recorded that just on a laptop with a friend in the office of my house. I will say, that when I make a setlist, it’s always the Catching A Tiger songs that are first on there; ‘When I’m Alone’, ‘In Sleep’, ‘Little Love, and, ‘Oh Mississippi’. Oh and I will say ‘Record Collector‘, that’s one that I forget about and then when I revisit it, it’s so much fun.

I’m sure you’ll say no to this, but are there any on there that you just don’t like now, and you wish weren’t on the record?

I wouldn’t say dodn’t like it, but the song ‘Stranger‘ was one that kind of felt like a demo. That also wasn’t really recorded in the house when we made the record in Nashville. I think it’s a really cool song, I just always thought it kind of… I’ve never performed it live. It just always seemed kind of like a half-finished song or something.

Some people would just hate some of their old stuff, you know, and never want to play again, never want to hear it again, that kind of thing. Hence I was interested if there’s anything on there that you kind of felt you could have done differently or maybe done without.

I felt like that with ‘Loosen The Knot’ as well actually. That’s another one that I never really liked and never wanted to perform it live. Not because I didn’t like it, it was hard to sing. I’d be trying to sing it and I’d be like, “oh my God, I have to sit down, this song is relentless.” So yeah, that one I always forget about too, to be honest.

What were you up to then last year that made you start to look at the tracks and the early stuff that became Watch Over Me? What was it that prompted that? Was it lockdown in the pandemic or were you looking at that stuff before then?

Well, the anniversary edition was always going to happen. That was going to happen last summer. And then, you know, as we were starting to plan it in March 2020 and we’re having these conversations, then obviously COVID hit and everyone was just in shock. Then priorities started kicked in and we said let’s just put this on the back burner until there’s more clarity around what’s happening to the world. So it was like, yeah this’ll happen but maybe it’ll happen next summer. So I was accepting of that. But because we did then end up having more time and I was going through all of these boxes and journals, finding hard drives and Polaroids and finding my journal entries. And also the books that I’d written the songs in the first time that had alternate lyrics and, seeing pictures of myself from then… I really think that COVID did give me a little more space and time to sort of leisurely kind of find things.

Then once I started that just opened a whole new can of worms. And in time I was able to find all these other songs that weren’t even recorded for Catching A Tiger.

[At this point Lissie is interrupted by her dogs and leaves to go and put them outside, something familiar to all of us from the last 18 months…]

Okay. I’m back. So, all that led to wanting to listen to the old songs and then making that decision that it’d be fun for my fans to get to hear these really old songs. Ones that didn’t even make the cut for Catching A Tiger. I’m proud of them, but I would write these songs now. I mean, they don’t reflect at all in my reality. But it felt really nice, almost like a little prequel. So yeah, COVID did give us more time to sit around and think about our lives. And so it gave me an opportunity to really think that it’d be special to not only share this stuff with the fans who really want it, but then also for me to kind of put a punctuation mark of some kind to then now be ready to kind of shift to what feels like it’s next and what this next chapter of my life is gonna look like.

How did it feel digging out all that old music and those old notebooks and stuff like that? Did it make you quite nostalgic? Was it quite fun in that sense? Or was it more kind of, you were intrigued as to what you were like sort of 10, 15 years ago?

It was a mixed bag now that I’m thinking about it. I mean, even when we were putting stuff together for the early works there was a point where I actually felt quite sad for my younger self, like kind of realizing some of the painful things that I had gone through and come out the other side from. And, and so there was actually some sorrow and there was also some grief, to be in COVID and to be remembering this time in my life, when, there was an innocence to that and no one could have ever imagine that the world could really shut down so completely. Um, no one I think could ever have really imagined that happening. Also, I was a little less jaded and I just was open to anything.

At the same time though, also just laughter, good memories, remembering fun things, kind of laughing to myself and also being able to feel proud of myself. And just grateful for the things I get to do because of Catching A Tiger. It’s like this thing that I set out to do pretty much my entire life, that many people thought was an impossible dream. I’ve really found a way to create a life for myself out of it. I’m not like the biggest star in the world, but I really never wanted it to be.

Catching A Tiger (Anniversary Edition) and Watch Over Me (Early Works 2002-2009) are available now from everywhere you stream or buy music. You can find out more about Lissie at her official website.