IN CONVERSATION: Ada Lea “on the one hand…moving forward and growing, while the other side of you is gripping these memories” 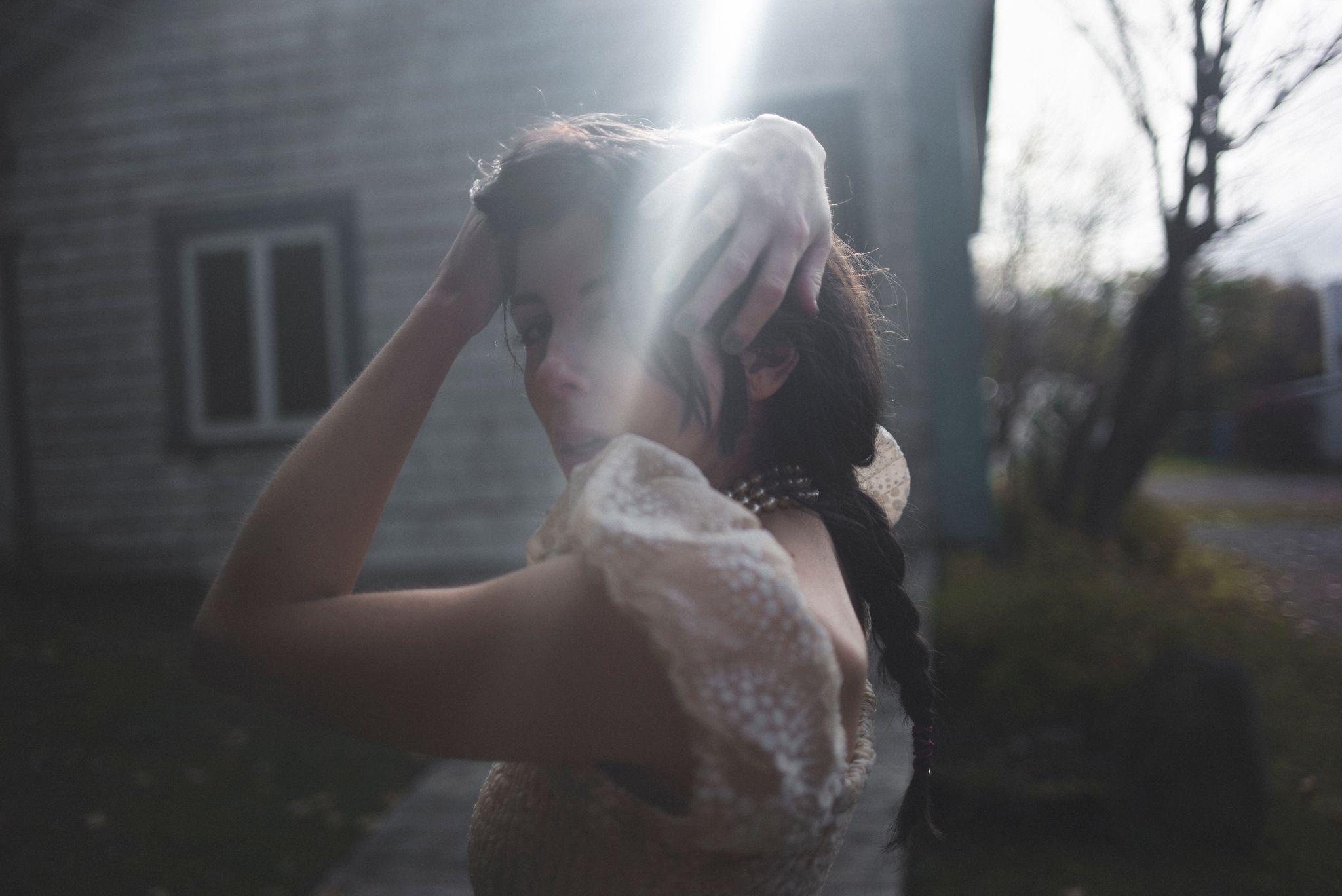 Ada Lea (the moniker of Alexandra Levy) releases her new album one hand on the steering wheel the other sewing a garden, through Saddle Creek this Friday. A brilliant, living, breathing record, set in her home town of Montreal: each song exists as a dot on a personal history map of the city where Levy grew up. The city is both the location and a character as the lines between reality, memory and fiction become blurred. Confusion, doubt and trauma are filtered to become universal songs for the uncertainty of our times.

The follow-up to her debut that detailed heartbreak, what we say in private, the experience and emotions of a year are communicated through Levy’s vignettes of city life. Her prose is centered in its setting of the St Denis area of Montreal as it draws up memories from local haunts like Fameux, La Rockette, and Quai des Brumes in rearview reverie. The soundtrack is clipped midnight folk with sprinklings of new wave and 70s classicism.

“I started to write in November 2019 and some songs in 2018, I think things slowed down when the lockdown occurred. Initially, my plan was just to spend four months when I got home from the states to work on recordings, overdubs and working on the album” Levy recalls of how the lockdown affected her writing. “I just really needed a deadline, I had to work through some perfectionism that had kind of gone awry through that period. At one point I wasn’t able to move forward and I needed to scrap everything and approach the project with a different mentality.” She continues: “There was some sort of vision in 2018, I had started working on this song called ‘Hometown’ and I was sure that the album would be called hometown, I just wanted a whole album that was just taking place in Montreal and exploring different areas of the city that were meaningful for me and I noticed a lot of my friends and I had special attachments to diners or run-down buildings. So I just thought it would be a fun backdrop.”

Poetic and built with layers in a foundation, Levy’s songs tumble forth making intensely personal experiences universal anthems, tapping into memory and locations, the slow-burning enveloping melancholia of ‘hurt’ that details the trauma of abuse or the affecting enveloping opener ‘damn’. Levy notes her stream of consciousness style comes from word association: “I think a lot of interesting moments can just happen when you are just stringing words together that have a connection and making associations – it accesses a fun part of your brain when you are doing that exercise there really just needs to be nothing blocking you creatively. “

The album’s unusual title with two seemingly disparate actions pieced together had its origins in a workshop. “It was just one of those exercises that I like to do at random times during the day, starting off a sentence and allowing yourself to just say something that comes to you and from there trying to find the link. I was taking this poetry workshop with this poet I admire in Montreal, one of the exercises was to take a photograph and write one line and at the end put them together in random order, so for the writer there was no connection between the photographs. “ She details: “When the reader is looking at the sentence they are trying to make connections even if there isn’t a link initially. I was just going with that – I had a few lines, and it just came, and it was really representative of the album – on one hand, wanting to be in control of what you are doing and driving and moving forward and growing, while the other side of you is gripping these memories and living, trying to piece it together.”

Levy is releasing a map of the locations that inspired the songs along with the record – she believes “It definitely sparks something if someone tells me that a song was inspired by a certain space or said in a certain space. It allows my imagination to run a bit freer, or create a more vivid world of what that person is trying to say.”

Opener ‘damn’ is a marvellous track that tiptoes through nagging, twinkling guitar riffs and swirling percussion. It’s a masterful song cycle, a stream of consciousness that pours forth with hints of Bob Dylan and Joan Baez. Tapping into the narrative that transports you to the events of a cursed New Year’s Eve party, and laced with an anxious existential quality that questions the foreboding passing of time, it spirals into a wonderfully tumbling anthem for post-pandemic confusion: sprawling, literate and fantastic. It’s sparked like many of the tracks by moments that she returns to, places and parts of the city filtered through Levy’s thoughts and emotions, and then reassembled in song. “The moments that have a big impact on me, I don’t like to write about them every morning” Levy reveals, “but I think it becomes obvious when an important event has happened, as its just something that you keep going back to at random moments in the day or the week or the month in the year, and when you come to writing something you can start to write about that thing you haven’t stopped thinking about…” she confides. “With that first album it was really writing as a cathartic process, with this album it felt like the process had already happened, so it was more a desire to share this memory, or this snapshot. Writing, in general, can be really therapeutic. The writing that I do in the morning is not songwriting, it’s a stream of consciousness or whatever I’m thinking about, or a to do list, or talking about the day before.”

Throughout the smouldering ‘partner,‘ Lea sings tenderly and with wide-eyed revelation late at night. Her intoxicating narrative lyrics shift from intense and meditative that could be redolent of P J Harvey to a melodic emotional hook that could easily sit alongside the likes of Courtney Bennett or Phoebe Bridgers. Grand and yet personal, it’s about an introspective evening unfurling over the pitter-patter of piano, synth, and a drum machine. Levy describes it as “a song about moving through a memory… an involuntary memory that steals up on you the night after a rager (which takes place the morning after the song ‘damn’).”

Levy penned and demoed this batch of songs in an artist residency in Banff, Alberta. After sorting and editing she made her way to Los Angeles to record with producer/engineer Marshall Vore (Phoebe Bridgers) who had previously worked on 2020’s woman, here EP.  “We had worked together once or twice before, artistically I felt supported by him, it was more difficult to just go into a situation especially not knowing someone personally and just choosing to trust them. But I also think that a lot of the magic can happen this way” She explains “maybe collaborating with close friends, although you have a strong foundation there in terms of our history and trust, I don’t know if that situation can create a good or better result or music, than working with someone that you don’t have that strong friendship with, but at least you are going into it choosing to trust their artistic abilities and the friendship doesn’t come into play like when working with close friends.” She reveals:  “but I love doing both and it was definitely an experience I really enjoyed. It’s important to be open to suggestions and having a kind of a strong vision and idea is also equally important – just allow whatever needs to happen, whatever you had intended the song to be, even if you don’t end up keeping it.”

The track ‘Oranges‘ began like many of her songs about a conversation or memory then grew from there. “I think it started off with my friend talking about a failed love interest and he was like ‘if I see so and so’. And I was like what should I be telling them?” Levy explains. “So for sure it was inspired by different events that were happening – I don’t know if there was one thing that inspired it.”

Levy thinks about how important fiction, reality and memory are, how important “truth” is when discussing art. “I have been really thinking about this the last few months, I don’t know how important truth, is or the quest for the truth, or whether something is from the heart, we already have so much material from those places from those bad feelings or darkness, coming from that place doesn’t necessarily mean that it’s going to be quote-unquote good.” Levy points out that the mystery around artists is sometimes lost: “there is this obsession with the creator of the work and knowing their personal life, that’s why Elena Ferrante is anonymous like her personal life shouldn’t get in the way of the story she is telling and it’s the work that should carry.”

She even questions the need for interviews like this, and whether she needs to explain the songs when listeners will interpret them in different ways regardless. “Obviously it’s great to be doing interviews like this but I do wonder if the album should speak for itself, should I be putting my own back story on it and whether that will help someone to connect to it more or less. If you don’t share your story then you allow the listener to make their own mind up.”

Levy shys away from the age of social media and sharing too much, that the mystery is lost: “This individualistic idea of something being unique or original pulls you away from being creative, because you are selling a person an individual rather than something that is outside of them” she muses. “I think it’s a system based on the individual.”

For Levy this second record represents a letting go, not just of how others will react to it, but her own expectations. She feels that’s freeing and allows the work to stand on its own: “There’s also an element of allowing whatever to happen and not completely controlling the image that is out there. It’s like I’ve done my best with the tools that I had at the moment, now I’m putting it out and if someone connects to the album that’s great, if they don’t that’s fine, and it’s no problem.” Levy notes: “I feel relieved, with the first album I felt I had control over whether people connected to the album or not, with this album I’ve let that go and its really liberating – it has no effect on me or my value, or how I felt about what I’ve made, and the album is really meaningful for me” she enthuses. “I love this detachment. it’s also about your relationships and interactions in life too, letting go about how you want to be seen, being able to let go over what people think of you too. What happened with the first album – unknowingly I wanted to be accepted or to have validation and wasn’t able to just take the work that I did for face value, and remind myself what it meant to me. It became more important what other people thought of it which is a bad thing. Trying to make music from that space too is impossible.”

Ada Lea’s new album one hand on the steering wheel the other sewing a garden is out on Saddle Creek this Friday.