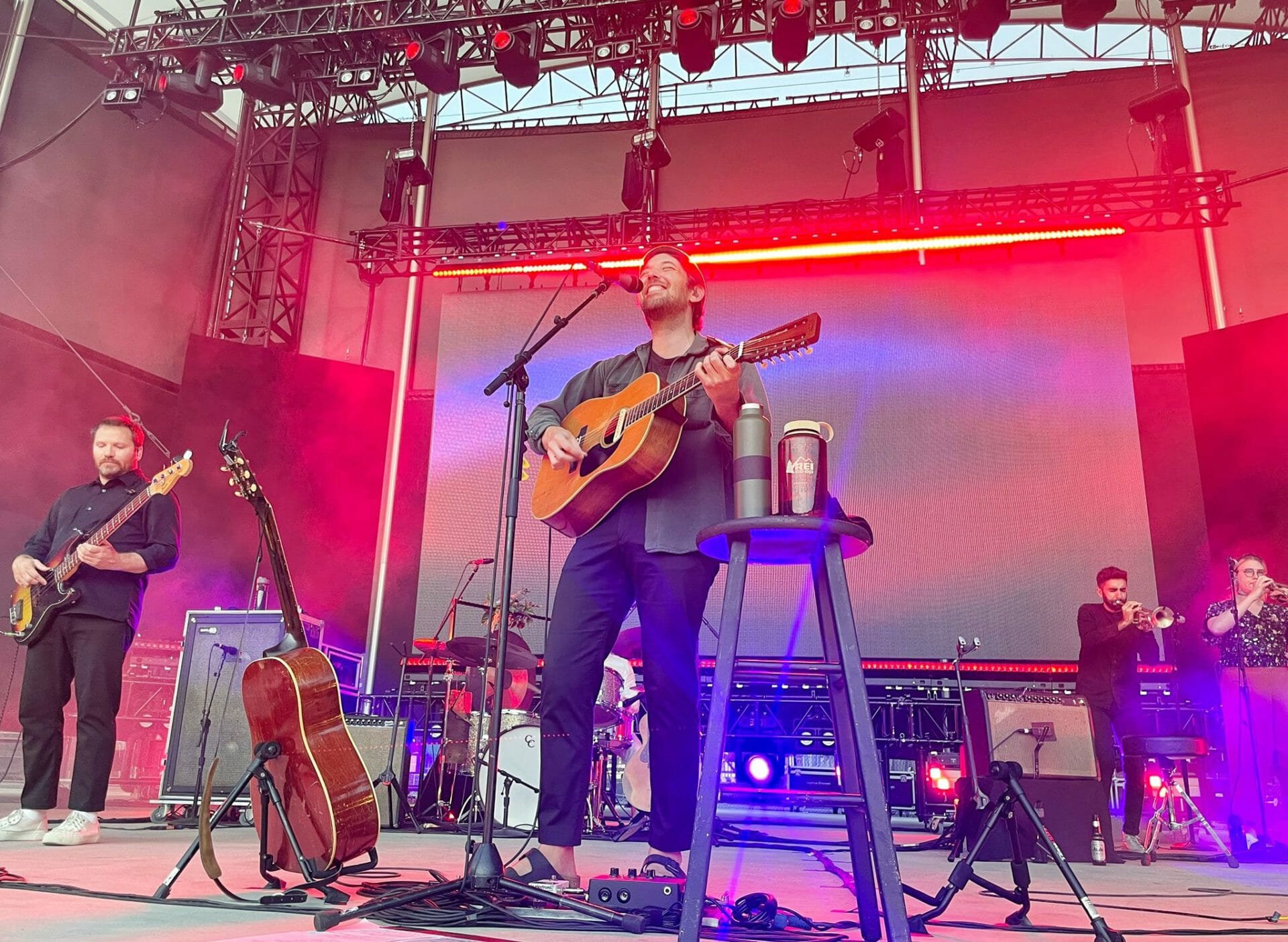 After spending all summer circling the United States touring behind their latest, Grammy-nominated album, Shore, Fleet Foxes landed in Queens, New York City ready to have some fun. There was no tour-weariness — rather, the band (rounded out by a full horn section) hit the stage of Forest Hills Stadium with a playful, loose energy that carried all the way through their 27-song set.Bandleader Robin Pecknold set the tone, taking the stage smiling wide and announcing to the crowd, “We’re gonna play a ton of songs. And I’m great, thanks for asking, everyone.”The band opened the show just as they open Shore, with folk newcomer (and opening act) Uwade singing the gorgeously breezy “Wading in Waist-high Water,” the intro leading seamlessly into the open-sky anthem “Sunblind.” The whole stadium handled the song’s soaring “whoas,” singing together with such might that people seemed to pause and realize: this was going to be a special night.Pecknold fed off that communal energy, taking moments between songs to read signs in the audience, like “None of us would be friends without Fleet Foxes,” to which the crowd let out a collective “Aw!”As the sun set on the tree-outlined stage, the band musically stretched out beyond the pastoral folk they expertly capture on record. The nearly 10-minute “Third of May/Ōdaigahara” put the four-player horn section front and center — pairing a heavier, richer layer of sound atop the band’s vibrant, rainbow light show. “Phoenix,” a track Pecknold released with Big Red Machine — a side project of Bon Iver and The National — played as a bouncing, Bruce Hornsby-esque piano-pop tune.But there was no mistaking it: at the core of Fleet Foxes is Robin Pecknold and his acoustic guitar. So when the band walked off to give him a 4-song solo spotlight, the crowd was in the palm of his hand. The aching, hushed “I’m Not My Season” silenced the stadium entirely, lines like “I liked summer light on you” bringing people close to tears.“I’ve got one more quiet one for you. But it’s one of the most beautiful songs ever,” he said, grinning, before covering Judee Sill’s mystical 1973 ballad “The Kiss.”The crowd’s adoration visibly impacted the singer, and he wasn’t shy sharing how that felt.“So… me crying gets the biggest applause of the night?” he laughed. “That’s what I learned here [in New York City]. Everyone is really tough, but you’re really sweet.”After 20 songs, the band left the stage and returned with a full outfit change: all 9 members wearing matching all-white, Fleet Foxes-branded tennis outfits — complete with short shorts headbands and high socks. Uwade rejoined the band to cover The Strokes’ classic “Under Control,” reimagined as a swooning, horn-laden duet, before the band wrapped on an energetic high: the anthemic, driving “Helplessness Blues.”The song was a natural pick to close the show, sure, but it felt poignant in Forest Hills — an open-air stadium in New York City that somehow feels natural and green. And singalong lyrics like “If I know only one thing, it’s that everything that I see of the world outside is so inconceivable often I barely can speak” hit a chord with the crowd.If they couldn’t speak, they could definitely sing. Please enjoy this full-length feature from Relix Magazine. Not a subscriber? Show your support for only $2/month