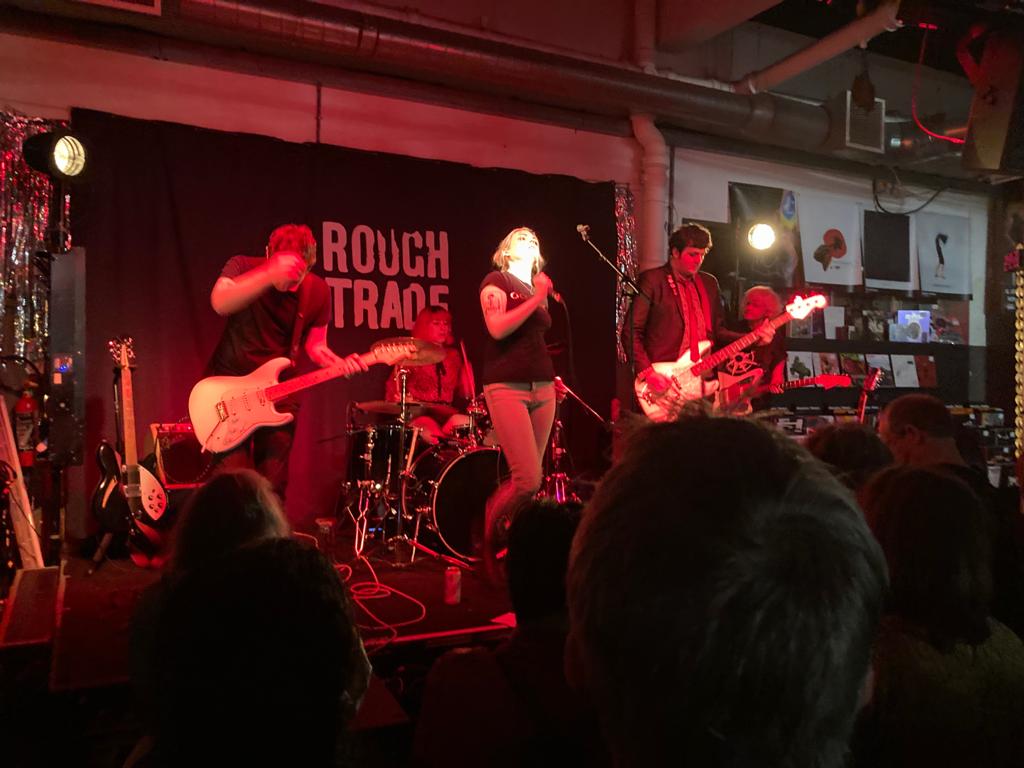 As sure as a late July afternoon will have torrential rain, Desperate Journalist will have released another masterpiece and are doing a launch in-store at Rough Trade East, just off Brick Lane.

Naturally this is a rescheduled event because of Fucking Covid (TM pending) and comes nearly a month after the album release date. Could have been worse though. For the first time in nearly 17 months that these eyes and ears have soaked in live music, and it could not be a better band.

The high ceilings of the old brewery and large standing area created by moving the racks of records and CDs to the side, allows a real sense of space that allays any lingering fears of being squashed together in a usual gig venue. It’s a gentle introduction back to the live music arena. Except for the music, which is as beautifully intense as ever.

Crashing into the first single from the Maximum Sorrow! LP, ‘Fault‘, Jo Bevan’s wails crash like waves over the pulsating bass from Simon Drowner and tight, metronome drums of Caz Hellbent. Rob Hardy provides the textures, pulling as many different sounds out of his Stratocaster as he can, reverb and delay heavy atmospherics bounce around the room.

Like the record, ‘Personality Girlfriend‘ follows thick and fast, with arguably Bevan’s finest vocals to date, an irresistible pop masterpiece that disappears down a spoken word rabbit hole of self deprecation and self flagellation over squealing guitar and deep rumbling bass.

They continue with Maximum Sorrow! tracks by tumbling into next single, ‘The Victim‘ , a pared down song in comparison, but another that expertly demonstrates Jo’s immersive vocals “play the victim a little louder”. Whilst not being the most experimental musical track, the riffs are trademark Rob Hardy but everything is just up a notch, the songwriting and arrangement is on another level.

Next is “a fucking old one” and they launch into ‘Cristina‘ from their eponymous debut, and ever present in their setlist. They may never have played a gig without it in the ranks. We all know and love this one.

They move on an album and the first single from Grow Up, ‘Hollow‘ , the brooding, menacing minimalist anthem.

A curve ball is then thrown in the shape of ‘Eulogy‘ , a debut album track that featured at their gigs up to the release of their second release but has been used sparsely since.

They end with their most recent single, ‘Everything You Wanted‘ , the epic six minute titanic ballad.

Whilst the record is littered with sky scraping monsters, such as ‘What You’re Scared Of‘ and the conclusion of ‘Armageddon‘, there is plenty of time for that at their coming full gigs. Well, I say coming gigs but their headline dates don’t start till December but fingers crossed there’ll be a surprise along the way.

On this showing, they have slipped back into the groove very quickly and easily and they will be match fit come the winter. In all honesty it was just the most incredible feeling to be back at a live gig, the fact it was Desperate Journalist made it pretty much perfect. No sorrow, Maximum Pleasure!!!