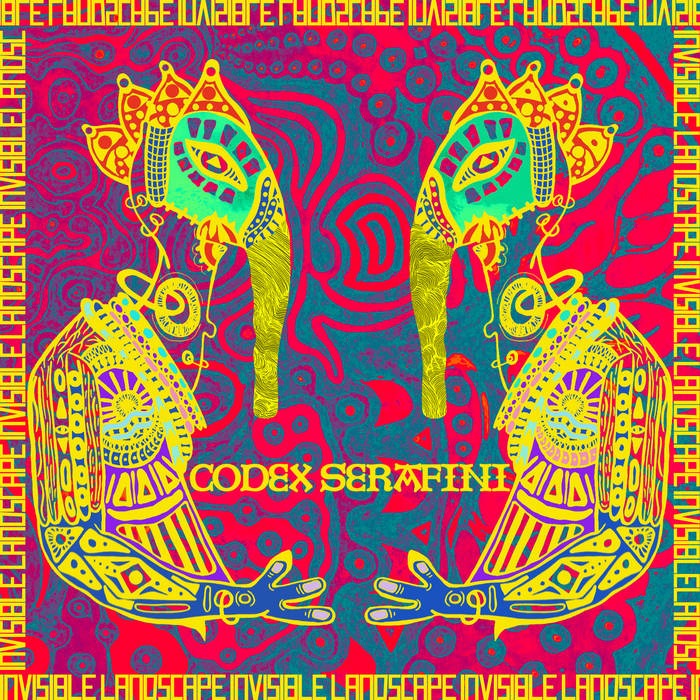 I remember being at uni and seeing bands on what felt like a daily basis. There was something exciting about walking into a venue knowing nothing, apart from a song or two, and being blow away. The let down was when you started to find out who was in the band, their background, and lofty ambitions for the future. This isn’t something to worry about with Codex Serafini. Extraordinarily little is known about who is in the band and their back story of being from Saturn is playful enough that it kind of works. Their debut cassette Serpents of Enceladus, released on Brighton’s Ceremonial Laptop and Halfmeltedbrain Records, was a delightful 29-minutes of doom-laden psychedelic shronk rock. They have now returned with its follow up, Invisible Landscape, which not only matches the original but at time eclipses it.

After a few moments of drums, and chugging chords, ‘Organismic Thought’ opens with cascading vocals, glorious horns, and a slightly pleasant feeling of doom. About a third in the main riff kicks in and we’re off to the races. The music is lithe, frenetic, and incredibly catchy. This is both expected and unexpected. After taking delight in their 2020 debut, I was expecting to be taken on a journey, but it wasn’t expecting this immediate barrage to the senses. What Codex Serafini do incredibly well is let the rhythm section get locked in a groove and stay there, allowing the guitars, vocals, and horns to just do their thing. The standout track is the closer ‘Time, Change, Become’. The music is heavy and dense, and the vocal shrills, and trills complement it. The real star of the show are the undulating basslines and those glorious horns. Together they allow the guitar to go off into solos of epic proportions. In short, it’s an absolute joy and the fitting way for ‘Invisible Landscape’ to end. Even if at 18-minutes another track or two wouldn’t have hurt.

Invisible Landscape shows a progression of sound from their debut cassette. The horns are more pronounced and shronky. The rhythm section is tighter, the guitar work creates an intricate patchwork for everything to work around and the guttural screeches work well. There is, however, a sense of what might have been. There are only four tracks, which is undoubtably due to covid, and some of the vocal yelps are jarring and remove you from the music momentarily. In a live setting they would probably work incredibly well but here they sound like a vocalist who is filled with energy and wants to let us know that they are still part of the party. In time hopefully the vocalist will become more confident in their talents and realise when to just let the music flow and billow about. This might also be another instinct of covid preventing the songs to reach maturity. If gigs had been possible these kinks would have been ironed out on stage and when it came time to record the songs would have been more fully formed. Saying that I really enjoy the ad-hoc quality to the songs and look forward to hearing them live. Of course, this is just nit-picking. Overall Invisible Landscape is a strong collection of songs that builds from their debut and hints at where the band will be going once everything calms down and opens up.