Big Country – The Buffalo Skinners / Without The Aid Of A Safety Net – Live (Vinyl re-issues, Chrysalis) 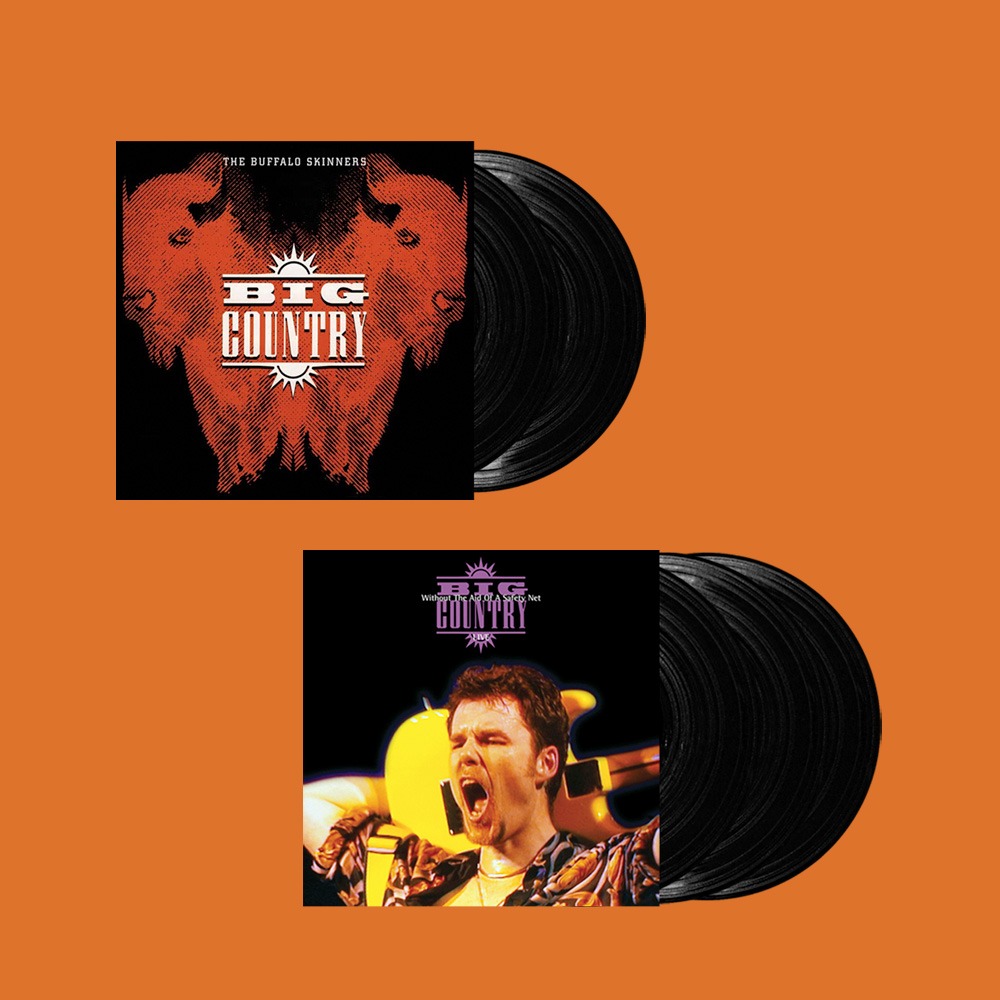 Back in 2004, I interviewed The Alarm‘s frontman Mike Peters. His band had just rather wonderfully shown up the music industry for all its quiet prejudice by releasing a fast paced, catchy single called ‘45 RPM‘, under the pseudonym The Poppyfields. Aware that the music press regarded them as ‘old hat’ and ‘uncool’, they enlisted the help of a bunch of teenagers to pretend to be this ‘new’ band in the video. It worked a treat, and the single became their first Top 40 hit since the 1980s. During that chat I had with Mike, he singled out a band that he regarded as ‘brilliant’ but whom, he surmised, had been treated badly, and with unwarranted contempt, by the British music media. That band was Big Country.

He had a point. Whenever I hear any of Stuart Adamson and co’s biggest hits now, they never fail to put a smile on my face. ‘Fields Of Fire‘, ‘In A Big Country‘ and ‘Chance‘, at the very least, ought to be regarded as some of the finest works of the decade, but at the time, they were largely – and unfairly – dismissed by critics. Fortunately though, their fanbase was very loyal and Big Country continued to have relatively successful records up to 1993 with the release of The Buffalo Skinners, which spawned two hit singles.

By this time, the band was clearly being influenced by American music, from both the heavy rock and Americana scenes. Indeed, it’s distinctly possible to imagine both ‘Alone‘ and ‘Seven Waves‘, the two songs that open the album, being written and conceived by Jason Isbell, one of the greatest songwriters of the 21st century, no less, whereas ‘What Are You Working For‘ has more in common with the hard-hittong gnarliness of Metallica and ‘Ships‘ comes across like an Elvis country rock ballad or even a little like Gary Moore. It’s an interesting mix of styles and it sounds fabulous on vinyl, especially the thrilling decadence of original album closer ‘Chester’s Farm‘.

Aside from The Buffalo Skinners, we also have the delights of the triple vinyl live set that is Without The Aid Of A Safety Net. As someone who isn’t generally a fan of live albums, I have to admit that this record – from their show at Glasgow’s Barrowlands in December 1993 – is nothing short of remarkable, especially given the circumstances of the American tour that was its catalyst.

As guitarist Bruce Watson says in the sleeve notes of the lavishly presented gatefold, “After a power failure due to frosty weather in Detroit, we were reduced to playing the concert acoustically.” Watson goes on to mention that some of the songs worked so well in that format that they kept them that way! And it’s true actually – something magical happens to them and we are able to see (well, hear) all the attention to detail in the arrangements of these compositions. It’s really quite beautiful hearing the likes of ‘13 Valleys‘ and ‘Winter Sky‘ in this stripped down manner. That it’s all been re-pressed on stunning vinyl just gives everything an extra edge, and after the pretty readings of ‘Tracks Of My Tears‘ and Neil Young’s ‘Rockin’ In The Free World‘ (one of two songs by the Canadian here), side three sees them raise the rafters with the ruddy faced rock of the now amplified ‘All Go Together‘ and ‘We’re Not In Kansas‘. If disc one and two were a fascinating insight into some splendidly well crafted songs, then from this point on, it’s just an out and out blast.

It’s also great to hear Stuart Adamson sounding so happy and confident, wickedly witty in exchanging banter with the audience and proving just what a great showman he was, as opposed to the tragic, somewhat surly figure he is often perceived to have been.

It’s difficult not to single out those classic 7 inches as highlights but they’re so powerful that you just have to. Other standouts are the proggy rock of ‘Lost Patrol‘ and Steeltown‘s seminal title track but really, it’s an essential artefact from the Big Country canon.

So I guess Mike Peters was right. I haven’t asked him recently whether he still believes what he told me all those years ago, but seeing as he joined the band and assumed the Adamson role on their 2013 album The Journey, I think we all know the answer to that.

Truly a class act, and much better than they were ever given credit for. And here’s the evidence.

The Buffalo Skinners and Without The Aid Of A Safety Net will be released on vinyl through Chrysalis on 27th August.