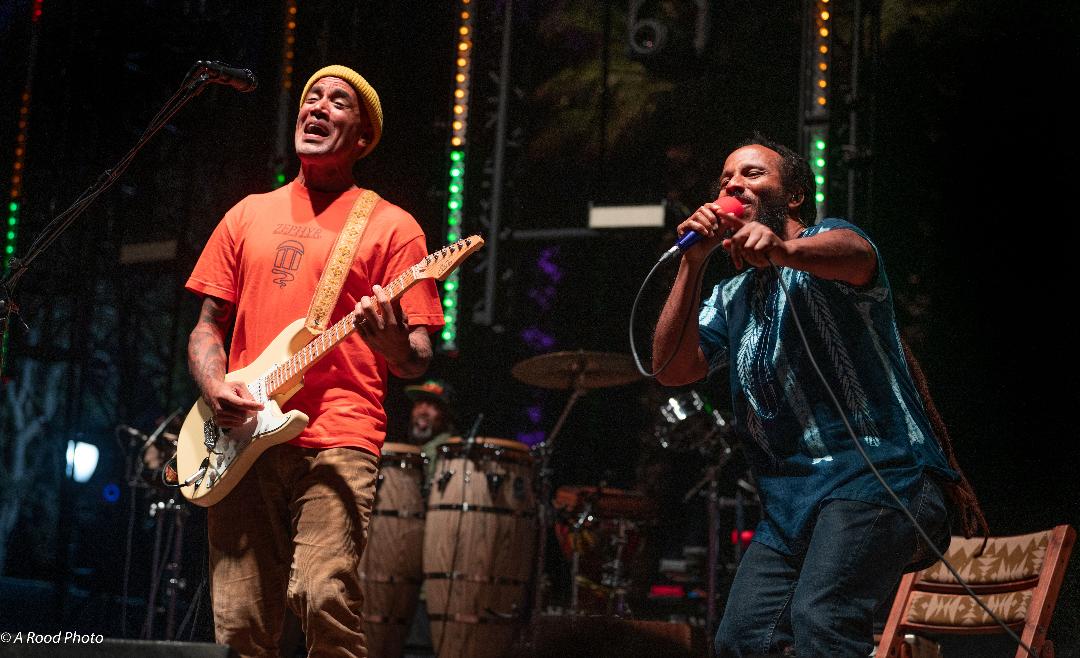 photo credit: Steve RoodThe pandemic-delayed return of BeachLife was worth celebrating as greater than just a weekend carnival of live music in the Southern California sand and sun.  Unlike dozens of other festivals that sat out 2020, BeachLife had but one edition under its belt–albeit a wildly successful debut in May of 2019–with hopes of building an annual tradition, and a decade-long stay in Redondo Beach’s Seaside Lagoon, before the world shut down.  The community of coastal towns south of Los Angeles (Manhattan Beach; Hermosa Beach; Redondo Beach) rallied support for the festival through the lean of quarantine, then showed up in force- this time in mid-September- for three sold-out days and nights of swordfish tacos, donut sundaes, and the sounds of summer, present and past.Musically, BeachLife 2021 seemed broader in intent, incorporating a fourth stage on the expansive waterfront lot; a Speakeasy that steered vintage punk artists toward low-fi afternoon sets, and transformed into a DJ-driven getaway for each night’s closing hours.  The Riptide stage, moved to the inner circle of the food court, offered, as well, some of the weekend’s more eclectic, if less attended, performances: Friday afternoon’s appearance by Paris Jackson drawing the devoted and the curious; Saturday’s triple shot of winners–The Mother Hips; The Aquadolls; and Dylan Chambers; an exceptional Sunday set by Cali-native-turned-Nashville-citizen, Nicki Bluhm.Yet, the main events, once again, shined brightest, alternating in hour-plus increments between the Hightide and Lowtide stages.  Friday kicked off with a punchy shot of Tomorrows Bad Seeds, then to the punky fun of Save Ferris.  But, it was Larkin Poe’s focused and motivated Americana crunch, led by the always-impressive Lovell sisters, that stole the afternoon; the duo peeling off heavy Delta blues, harmonious country, and rippling roots rock, nodding to a host of Southern touchstones including Son House and The Allman Brothers Band. The evening shifted between the dreamy, blissed-out 21st-century rock of Silversun Pickups and Cage the Elephant at Lowtide, and the soulful, New Orleans party parade of The Revivalists at Hightide, until the night’s headliner, Jane’s Addiction, dominated with dark-eyed flair.  Other than a few sporadic appearances in recent years, Jane’s Addiction has been largely dormant.  The time away certainly didn’t matter in this captivating performance, as the ‘90s L.A. alt-rock kings delivered a visually impressive and sonically commanding spectacle.Saturday afternoon rode in on a wave of good-vibe nostalgia, dropping in with Yachtley Crew, English Beat, and Sugar Ray, and cresting with the indie musings of Phosphorescent and country sway of Cam.  Next, Jakob Dylan and The Wallflowers presented their poetic mélange of heartbreak and headlights, knocking out a stellar hour of modern American rock.  Colin Hay reassembled Men At Work, showcasing the multi-instrumentalist talents of woman-at-work (and Dweezil Zappa collaborator) Scheila Gonzalez on the ‘80s Aussie pop rockers’ numerous fan-friendly classics, while Fitz and the Tantrums pulled the pack back to the future with a potent and pulsing evening showcase.  In Saturday night’s star slot was Counting Crows, front-loading its 90-minute run with some of its bigger charters, “Round Here,” “Mrs. Potter’s Lullaby,” and “Mr. Jones,” while sneaking in a resonating acoustic take of the Grateful Dead’s “Friend of the Devil.”Variety reigned on Sunday as Brett Dennen’s simple and charming mid-morning opener played nicely under the coat of marine layer, giving way to Melvin Seals and JGB, with guest guitarist John Kadlecik, launching their Lowtide time with “Cats Under the Stars,” and dazzling with a rumbling “Deal.”  G. Love and Special Sauce brought Philly’s hip-hop blues and a few friends to the beach as, (noticeably, maybe the weekend’s only surprise), guitarists Donavon Frankenreiter and Eric Krasno joined the tracksuit-loving Love for a raucous and fittingly loose rendition of The Rolling Stones’ “Sympathy for the Devil.”Hometown-band-made-good Fortunate Youth ushered Cali Reggae into the afternoon, then Thievery Corporation mounted its own quest to unite the capacity crush.  Back at Lowtide, Gary Clark Jr. unloaded his explosive modern blues before Portugal. The Man’s energized romp amidst giant bouncing beach balls on the Hightide side.  Ben Harper and The Innocent Criminals appeared as dusk fell, playing a wide-ranging set peppered with nuggets and a special sit-in by Ziggy Marley, as a perfect lead-in to the festival’s closer, Ziggy and Stephen Marley performing the songs of Bob Marley.Few artists could’ve have been more appropriate for the fest’s finale, honoring of one of music’s greatest songwriters and performers.  Marley’s scions planned to tour in 2020 in recognition of Bob’s 75th birthday, but shelved plans in lieu of COVID-19.  The brothers’ tribute was nuanced and pleasing, offering rarities and sing-alongs from the legend- from “Nice Time” and “Burnin’ and Lootin’” to the expected gems, “Three Little Birds,” and “Could You Be Loved”- with thoughtful and impassioned effect, satisfying 10,000 souls living three days of BeachLife.