Make It Rain is an event being held in Los Angeles, California to raise funds for the Australian bushfire that has now burned over 10 million hectares, destroyed 2,000 buildings and killed 1 billion animals, as well as taken 27 human lives.

Read this next: A ' fundraver' for Red Cross Australia is being held at Omeara in London

The event is to take place on January 29 from 9pm - 3am at the Academy LA on Hollywood Blvd. The electronic music community is showing up to make this event happen featuring Australian artists Nina Las Vegas, What So Not, PNAU, Hook N Sling and more special guests to be announced. The proceeds from the fundraiser will be donated to Red Cross Australia, GIVIT and NSW Wildlife Council (NWC). There will also be a silent auction for attendees to bid on prizes.

Read this next: EMC Australia came together to push Sydney's electronic music scene to greater heights

The organizers the event, Andie Leon (Academy LA), Lorne Padman (Dim Mak) and Tyson Illingworth (tyDi), explained their reasoning behind throwing the event in LA stating, "The feeling complete helplessness got too much for us here in LA, and we knew we needed to channel our energy into something bigger than ourselves. We’re stoked to see how the dance music community has been so supportive this cause and we look forward to seeing our friends and family at Academy on January 29th".

For those who can't make the event, it will be broadcasted on SiriusXM Diplo’s Revolution on Saturday, February 1. 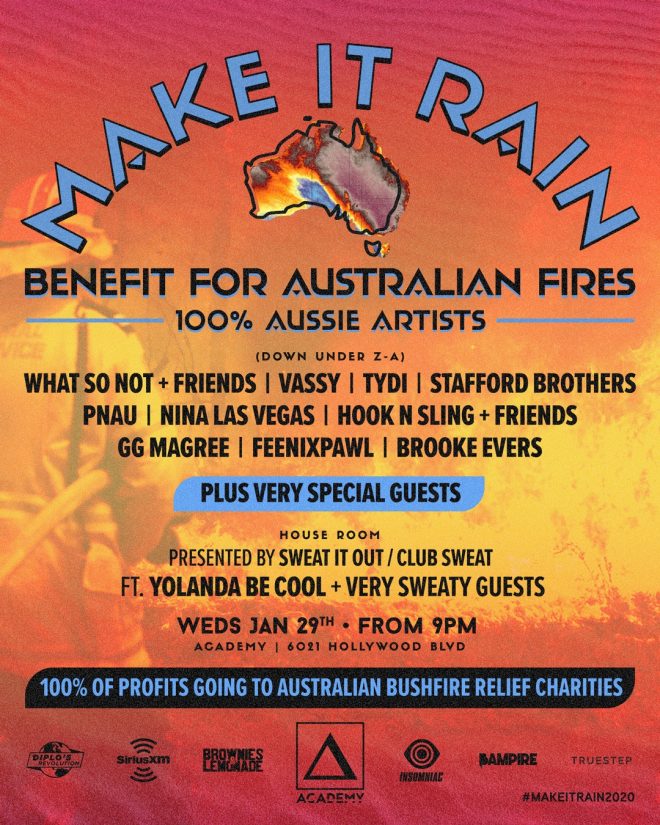 Read more here: Get the best Mixmag direct to your Facebook DMs