Kloe interview: “I wanted the video to feel powerful — I don’t want to be a whiny victim” 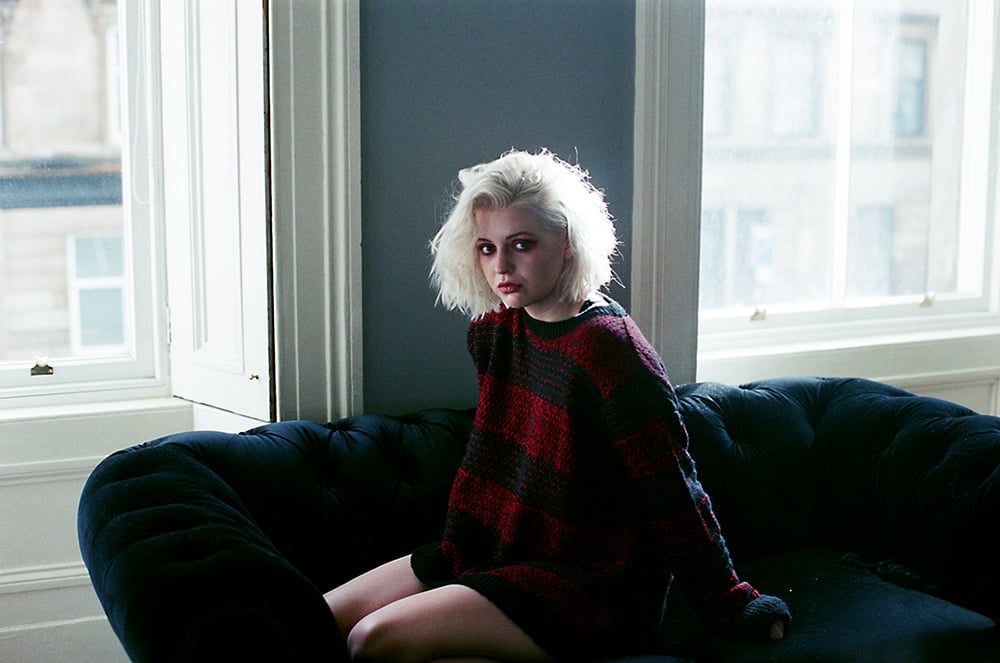 Definite Popstar Kloe is about to release two songs. The first is called ‘UDSM’, which is young person for ‘you don’t see me’, and its video’s out today.

As the song and video are both com­pletely unrubbish, and as the video is Based On Real Events and has quite a lot going on in it, we thought it’d be good to chat to Kloe about what it’s all about. So we got her on the phone last week.

“The video’s based on a true story,” is how she begins. “I’d just come down to London and of course what do you do when you’ve just started working in the music industry? Obviously you fall in love with a fucking guy in a band. So one night off I went to see this guy playing a gig, pure buzzing, and he told me to go to this bar afterward. I was like, ‘okay! Great! Cool! Yep!'”

“So I get there and he walks in, straight past me, with two blonde girls, one on each arm. At first I’m laughing because I’m in total shock. Then he starts kissing one of them! And then he looks at me! Obviously by this point I’m like, ‘what the fuck’. I ran out, crying, and just walked arout Camden by myself for an hour, crying. Nobody gave a fuck. That’s what I love about London — I’ve cried in public in London twice now, and literally NOBODY CARES.”

But what happens in the video? Well…

Was dancing to your own song with a load of paid extras a bit “look at me”?
[Extended shrieking] IT WAS SO EMBARRASSING. There were so many of them! Oh my God. There were about thirty of them! And you know what actors are like, they’re all fucking mental — I was waiting for one of them to go, “what’s this song, it’s FUCKING SHITE”. Oh God. It was so embar­rass­ing. I was saying to the director, can we not just get another track and speed it up to the right BPM? They were like: “No.” So yes, I had to dance in my own video to my own song with a load of paid extras and it was awful.

How much did you pay those people to pretend to be your friends?
I don’t fucking know! Ask the label! But I do feel like I’ve made some friends out of it. I think they genuinely thought I was cooler than I was. Everyone was really nice and you kind of forget — you become best friends with them for two days.

Was that actual booze?
Right. So. The pints were all real, so I was loving that. But when I’m downing drinks that’s tonic water. And I was like, why can’t they just give me normal water? Why does it have to be FUCKING tonic water? I was literally boking. It was so dis­gust­ing. I had to down it like ten times.

Is the tonic water thing something you have to go to RADA to under­stand?
I think it must be. But everyone was having a great time drinking their real pints. The woman in charge of the props was like, “can you stop drinking the props please”. And we were like, “no”.

What are your real life tips for getting served at the bar, bearing in mind standing there with a face like a slapped arse doesn’t usually do the trick?
Well, last night I went out — obviously — and I was at a bar. And what happened was, I ran into an ex-boyfriend. Well, an ex. Well, he was someone I dated for like a week then didn’t text him back. ANYWAY I just ran to the bar, and I guess I just really looked like I needed a drink. So I think you need to look like that. Also: say thank you after­wards because that means they’ll come back to you again next time. And don’t shout at them.

There’s a line that goes “you’ve been fucking that girl Emily” accompanied by a shot of Love Interest with a woman viewers are invited to assume is That Girl Emily!

Is Emily a real person?
This is like Becky with the good hair! So Emily is a real person. And her name is… Well, it’s Emily. It’s all real. Everyone in my friends group in Glasgow thinks it’s hilarious.

Does Emily know she’s in your song?
Right — so, listen, when I wrote the song I decided to message her to kind of be nice and say, “hey, this song’s coming out, and it’s got your name in it, soz”. But she’d blocked me! She’d blocked me off everything! So there you go. But my friend told me that Emily’s angry but secretly loves it, so I don’t really care.

There are ‘gun fingers’!

That bit’s good. Whose idea was it?
That was my idea. I’ve been wanting to do that in a video for ages. It was inspired by Spring Breakers. There’s a theme of that running through both videos, actually. That’s the first shot in this video — STRIKE ONE! — then there’s another one in the ‘Liability’ video. [‘Liability’ is coming in a few weeks.] I wanted the video to feel powerful — I don’t want to be a whiny victim.

Are you trying to look cool or what?
NO! Jesus. So basically the reason I look like I’m ‘looking cool’ in the video is that when you smoke a cigarette normally you inhale and blow the smoke out normally, but that doesn’t look good on camera. So to make it look better on camera you have to blow it out dif­fer­ently, do you know what I mean? Oh well, what can you do.

This interview is like an acting mas­ter­class.
Acting is so fas­cin­at­ing.

You brandish that chip with a distinct sense of purpose. What’s the best chip in the world?
Oh my God — Loch Lomond, near Glasgow. Amazing. Honestly if one day you wake up and you’re like “I really, really want to just have the best chips in the world”, if you do that eight hour drive to Glasgow you won’t regret it.

Are you snorting cocaine, or snuff like a Victorian lady?
Er, well, it’s supposed to look like cocaine but it def­in­itely wasn’t. NOT THAT I WOULD KNOW. I don’t know what they used in the video, I think it might have been something herbal, and you had to sort of cough it back up. The funny thing is you actually feel quite fucked when you’re drinking and having fake cocaine. It’s odd.

Maybe cocaine has been a con all along and all you need to do is snort any old nonsense.
Imagine.

Is it fair to say this is a video that screams “here’s a woman with a low Uber rating”?
Yeah, that’s me. I spewed in an Uber last night actually. Yes, I know, what’s wrong with me. It just came out! The guy was all like “look what you’ve done to my car!” and I was trying to give him money, but he wouldn’t take it because he’s not supposed to, but he took it in the end. I felt really bad about that. I always make such an effort to be nice to Uber drivers as well. I give everyone five stars no matter how shit they are and I’d hope they’d do the same to me… But after last night’s antics, probably not.

What was the video vomit made of?
It was so dis­gust­ing that I actually wanted to be sick for real. It was min­es­trone soup, cold, with oats in it. WITH OATS IN IT! Why couldn’t they have just given me the soup? The director was like, “go with it! Go with it!”. But I had to do it five times and I’m never going to do that again.

What was your best-ever vomit?
Christmas Day last year. Where I grew up there’s just one club, and it’s where everyone fucking goes on the weekend. It’s so dreadful. It’s called MANGO. I went with all my friends from school and in Scotland you get these things called Venoms — whisky, rum, vodka and anything you can imagine, all in one minging drink. I didn’t realise how strong it was because they put blue WKD in it too to make it taste nice. I just thought it was a really nice cocktail. I only had two but appar­ently — I don’t remember this — I pro­jectile vomited across the table onto a girl’s shoe. Next thing I’m being escorted out by two bouncers and chucked out. Never go to Club Mango.

Do you think the problem might not so much be Club Mango itself, but the fact that you’d downed two Venoms?
Oh my God! LEAVE ME ALONE! You know what it’s like, when you’re around your old school­mates it’s a bit hard to handle anyway, so I guess the only way to get through it is to get as drunk as possible.

And finally — there are tears!

How did you make yourself cry?
They’re real tears. Jack, the actor guy, came into the bathroom when I had to cry. In he comes, starts calling me a cunt, saying I’m a slut and all that. I think he was trying to make me cry but I just found it really funny. I’m sorry, I just find actors really hilarious. When it came to actually shooting the scene I had really bad hayfever that day and I think my eyes were already watering because of that. Unfortunately once I start crying I can’t really stop so we’d shoot the scene then the director would come over and I’d still be crying. And it’s such an ugly cry! So embar­rass­ing.

Not to question your popstar cre­den­tials but do real popstars get hayfever?
Oh for fuck’s sake YES THEY DO.

Can you name one big popstar hayfever sufferer?
Oh I DON’T KNOW. Wait! You tell me! You’re supposed to be the fucking expert!

Well Beyoncé sneezed on stage recently, so she’s a pos­sib­il­ity.
It’s so weird thinking that famous people do things like that. My mum used to say to me when I was growing up and getting into music: “Kloe, just remember, everyone pees and shits the same as us.” I carry that through life.

You can listen to Kloe on Spotify, buy her stuff on iTunes and follow her on Twitter.