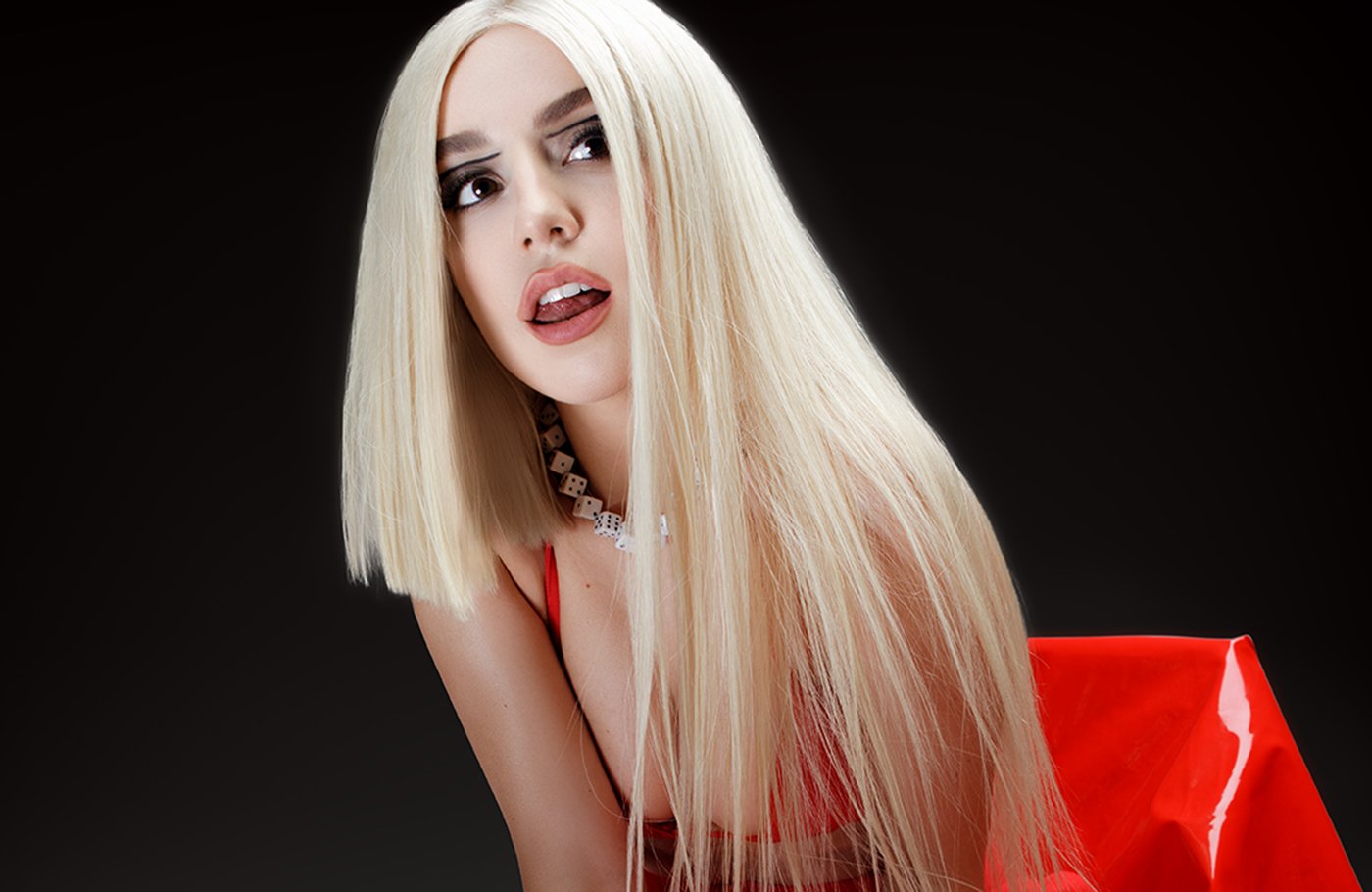 Ava Max has two con­cur­rent haircuts, several A+ pop belters and, as of today (September 18 2020) precisely one (1) highly listen­able album. She spoke with Popjustice recently in an interview that included an unex­pec­ted reference to char­cu­terie boards and therefore counts as ‘wide-ranging’. Here’s what she has to say for herself…

Ava Max, hello to you. What’s on your mind today?

The album release. I’m really excited about it.

STRAIGHT IN THERE with an album plug. In fairness it’s a good album. Not one of those ‘all the good singles plus some rubbish’ situ­ations.

That’s the opposite of my situation. We have a problem! You know what that problem is?

Our problem is every single song is a single. We don’t know which one to put out next. (Elaborate cackle)

I suppose once the album’s out it’s easy: see which one’s streaming best, that’s the single, shoot the video.

In an election year that’s a very demo­cratic way of going about things things.

He won’t remember this. I was very, very young — I was twelve years old, at a Miami airport. I’d flown there with my parents from Virginia. I saw him and I went: “AH! It’s PHARRELL!” I walked towards him, said hi and told him I loved him and that I was a singer, and he said: “Keep going.”

In one sentence how much has your life changed since then?

Oh, it’s gone downhill. JUST KIDDING! It’s actually gone quite uphill actually. Because of everything with the album, I’m—

There it is again! The album!

Yes, again. I can’t wait for people to hear the album. Can it be out today? Why isn’t it out today‽

Obviously this is in the hands of the streaming gods. We do not question their motives. There was an article recently that got shared a bit, mainly relating to the release of the Katy Perry album, and it was pretty much an obituary for a certain type of pop music. But then here you are with your 32m monthly Spotify listeners, making it work. You’ve described your music as “straight, head-on pop”. What’s happening there?

You know, I get a lot of love but I also get a lot of hate. At the end of the day you’ve got to just laugh at the haters. It’s about going against the grain. I think that’s a good message for our youth. We need to let our youth know that we have to go against the grain. It’s not always about following the leader or doing what cool. Personally I love this album: it’s anthemic, it’s empower­ing, and I enjoyed making it. And it happened to be that nobody else was making it. When Sweet But Psycho came out it wasn’t something I planned, I just knew it was something I loved, but I was aware there was not much pop music at the time. I didn’t think it was going to do anything. But it did. I can’t believe I’ve come this far — yes, I worked hard, but you never know what people are going to like.

You mentioned the word ‘cool’ there and I’m not quite sure how to phrase this without sounding extremely rude but most artists are very credible at the moment and that… Doesn’t seem to bother you very much?

What are the main benefits and pitfalls of having two haircuts at the same time?

Oh, well ponytails suck — you have to find a way to braid it in a certain way so it looks cool. ‘Cool.’ There you are, that word again. Hair does need to look cool when it’s braided. But when it looks like this [ie not in a ponytail, flowing free like Ava’s own creative spirit] it can be weird and messed up.

Some artists face dif­fi­culties when it comes to their ‘difficult second album’ but I’m wondering about your difficult second haircut. Or third, if we accept you currently have two.

I might shave my head. I love that look, but we’ll see.

And what is it that lies at the very deepest darkest recesses of Ava Max? What’s driving you?

My family. Seeing them happy makes me happy. I grew up with them and they sac­ri­ficed a lot for me and my dreams. I saw them struggle when I was growing up, you know they came to America as immig­rants… I just want them to retire and that’s the number one drive for me.

The thing about that is that when they’re retired they’ll have a lot more time on their hands to call you. Obviously it’s always a pleasure to speak to one’s family but… Within reason.

Have you ever predicted the future with such accuracy that you feel you may genuinely have psychic powers?

It’s hard to say. The night before Sweet But Psycho came out, I don’t know if I saw the future but I def­in­itely made a wish. I was on my knees, going: “If this doesn’t work, if this doesn’t resonate, what am I even doing?” It had to happen. When it came out and starting flying, and going crazy, it was like: something in the universe felt me. I don’t know if I mani­fes­ted it, or if it was the years of hard work, but something connected in the universe.

The first time I heard Sweet But Psycho being abso­lutely hammered was on a Swedish radio station I sometimes listen to if British ones have got boring. It felt like they were playing it once an hour, before anyone else was really on board. And combining that with the idea of you being on your knees, almost praying for success, makes me wonder if God might be Swedish.

AHHH!! SWEDISH!!! He might be Swedish. I wouldn’t be surprised.

Let’s talk about Heaven & Hell, that being the name of your album.

Oh my God. That’s a tough one. Anyone who’s ever cheated on their girl­friends.

That’s a lot of men, and to be fair a lot of women.

EXACTLY! (Another cackle) Also: people who never wanted to help me when I was ‘yay high’.

That’s quite harsh Ava. Someone didn’t want to give you a record deal and now they’re literally GOING TO HELL.

I’m thinking more of people who tried to steer me in the wrong direction ON PURPOSE! People! EVIL PEOPLE!

Did someone try to sabotage you?

It’s multiple people. I think in general people want to mess with something good, right? I was this young, 14-year-old girl in LA who was kind of naive and gullible and “oh my God LA’s a big city and I want to sing”… So of course people are going to take advantage of a girl like that. And that’s the worst part of it. That right there is NOT a good person.

What would be your rules for getting into Heaven?

Enter with some cupcakes.

A bit five years ago.

I LOVE A CUPCAKE. Remember: I’m not cool. Also, I’d like some Twizzlers, some Skittles… All the good stuff. That’s what Heaven is about. And a char­cu­terie board!

Just one from the grocery store.

Who would be an unex­pec­ted person to find in Heaven?

I’d like to find Joan Rivers in there. She looks really fun, but seemed like a really good person. She was a funny gal.

You told me to go for unex­pec­ted!

I just don’t can’t remember any artist ever men­tion­ing Joan Rivers in an interview.

Well here we are.

There’s a lot of screaming in your musi—

Is this going to be a motif moving forward?

There’ll be a few. I feel like screaming is part of my identity. In my songs, but in real life too. If I burn my hands on something when I’m cooking, I’ll scream. I’m always screaming. If I walk into a glass door, I scream.

Do you… Do you often walk into glass doors?

I do. I did the other day actually.

You’re the reason res­taur­ants have to put stickers on their beautiful doors.

I know. It’s literally me. I’m glad I haven’t broken any glass doors, I’d need to pay for them then wouldn’t I?

Let’s return to your favourite topic: your album. The album is dead isn’t it? This is what they say. “People just want tracks!”

Those people are liars.

Tell me more. What’s the sig­ni­fic­ance of the album as an art form?

Well I think visually. I def­in­itely saw Heaven and Hell in my head and I wanted it to be a full-length project. I never wanted to put out an EP. The album was def­in­itely the main goal. And then when it was done, I actually last-minute added Torn for Purgatory. I’m very excited about this record. I’m excited to see what people think of it.

So you put Torn on, but I notice you didn’t put Not Your Barbie Girl on. Seems harsh. Has that now been consigned to the dustbin of pop history?

She was def­in­itely there for me when I needed her. I don’t think she needs to be on the album. Oh my God I’m going to sneeze! (Doesn’t sneeze) I’m fine.

There’s that phrase, isn’t there, “the Devil has all the best tunes”. But OMG What’s Happening? is on the Heaven side of the album, which makes me conclude: God has some good tunes as well, or the Devil’s just not very good at making playlists. What’s happening.

OMG What’s Happening just felt like Heaven. She’s in love in the song — it’s a very happy song. So, right, how I placed the songs on the album was by melody and feeling, not by lyrics. If that makes sense? I wanted to make sure when you clicked play you felt either heavenly and happy or kind of devilish.

I’m a weird person. Also, again: not cool. I do things a little out of the box. Sonically it needed to fit.

Rihanna and Simon Cowell have each been injured in the last week. What steps need to be taken to protect pop personnel from electric scooters?

JUST DON’T GET ON ONE. Do not. I literally cannot even fathom going that fast. I went on one recently and it freaked me out. When I was a little kid I had a yellow motor scooter that I crashed. I did a full flip. I’m surprised I didn’t die! I landed in the grass. I def­in­itely don’t recommend going fast on these scooters. They’re very dangerous, actually. Get a bicycle!

You know Kings And Queens Pt 2, right, where Lauv and Saweetie turned up?

Could you do a thing where every two months you release it again with an extra two people added? I feel you could get away with an hour long version with a hundred people on it.

You can get away with anything these days. Sweetie and Lauv were def­in­itely mar­vel­lous.

Who would you like to add to the third version?

You and Simon Cowell once he’s recovered.

What a revolting idea. Who’s been talking today, Ava or Amanda?

I’m a little crazy at the moment. You can literally ask me anything and I’ll say it.

Never say that to a British inter­viewer, Jesus Christ. Any final words?

Thank you for having me on.

As you may have gathered, Ava’s album Heaven & Hell is out now. Why not give it a spin?